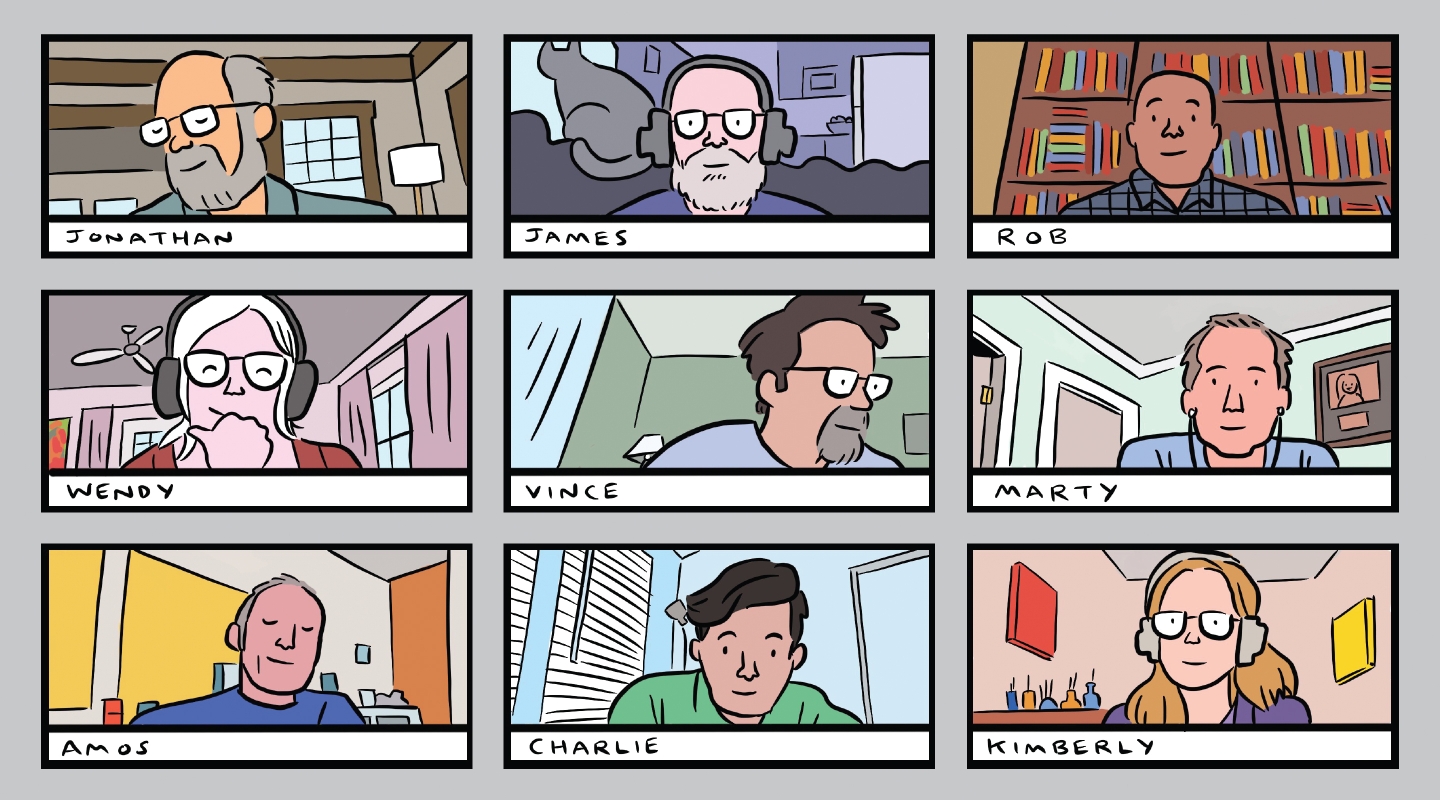 When the pandemic turned the College’s operations upside down in March, President Veitch had to throw out the script for his final days in office—but he and his team responded with commitment, collegiality, and flexibility

“I used to joke that I could work for 14 hours a day behind my desk and be energized,” says Jonathan Veitch, “but one cocktail party and I’m a wreck.” There’s not much worry of that these days. When Veitch steps down as president of Occidental after 11 years on the job at the end of June, there won’t be any of the traditional fanfare one might expect—no final Commencement address in Hillside Theater, no last goodbyes at Alumni Reunion Weekend.

But in a way he never could have imagined, the role he finds himself in as his tenure ticks down is far better suited to his personality. “The idea that I can put my head down and keep working and make decisions to put the College in a better position is more satisfying to me than simply doing the Queen’s wave,” Veitch says.

“One doesn’t really have the luxury of being exhausted,” he adds of the challenges of keeping Oxy going during the COVID-19 pandemic. “I see the commitment of the people around me, so I’m just trying to keep up with all of them and be a good partner.”

As colleges nationwide responded to the onslaught of COVID-19 in early March, there was a period of 10 days or so “where every day brought a different gravitational pull or topic to be worried about,” Veitch says from the relative quiet of his office in mid-April. “You were just figuring out the problems of one day when the next day would put us all in an entirely different universe.

“Even when things had stabilized somewhat by early April,” he explains, “that only allowed you to catch your breath and begin to sort out what summer might look like at Oxy—and then, more importantly, what to do about the fall.” He adds, “One of the strange satisfactions of the job of being president is the adrenaline rush of solving problems, and this is the mother of all problems.”

How does Veitch prioritize what to address in a given day or week in the face of the pandemic? “I wish I could say I prioritize it,” he says. “The urgency of the situation is such that it prioritizes me because of such questions as: How do we get 1,800 students out of our dormitories safely? How do we handle move-out? What’s the messaging? What does the reimbursement look like? How do we handle students who are engaged in hardship? And that was just a couple of days.”

Then there are the questions that relate to the College’s 700 employees: “How do you develop a plan about who should work from home? Who has to be on campus? That’s not to mention calming everyone’s concerns about their jobs and the solvency of the College. Of course, Occidental will survive,” Veitch says. “But the coming year will be very, very challenging.”

Of all the decisions made in March, the biggest was the transition to remote learning. Student reviews have been mixed, but “some faculty have said their students are doing the best work that they’ve seen,” notes Wendy Sternberg, vice president for academic affairs and dean of the College. “It’s not the way we want to continue operating but I’ve been so impressed how each one of our offices has been able to shift their operations in a way that helps our students approximate every aspect of the academic experience remotely.”

“Remote learning runs antithetical to the traditional ideas of a liberal arts education but the substance or pith of the education is there, even online,” Veitch says. But ultimately, he expects that the limitations of remote learning will only reinforce the advantages of a residential liberal arts college: “There are certain things that cannot be replicated from your parents’ home office.

“Whether or not people can continue to afford a residential education is another question entirely,” Veitch muses. He is especially concerned about providing financial support to sustain Oxy’s diverse environment for first-generation students. “We may come to see 2019 as a high-water mark for diversity on college campuses nationwide and at Oxy unless we are successful in raising more money for scholarships”—the highest priority of The Oxy Campaign For Good. “This model of education is expensive, and many families are not going to be able to keep up.”

One of the things the College will be focused on this summer is staying engaged with students. “It’s key to us to have as many students as possible return to the College, and to yield as many admitted students as possible,” says Rob Flot, vice president for student affairs and dean of students. Over the summer, he and his staff will be working hard to build community with Oxy’s new and returning students and stay “tethered with them as we move forward.”

And just how many students can Oxy expect this fall? We won’t have a good idea of that until mid-summer, according to Vince Cuseo, vice president for enrollment. Unlike a typical April in admission—when many students and their families make their last visits to college in advance of locking in their final choice by May 1—the campus was closed to visitors this spring, and admitted student days were canceled. “We are doing all that we can to engage our admitted students and parents—creating videos, hosting webinars, responding to emails and calls, and working social media, all in an attempt to best simulate the Oxy experience from afar,” Cuseo adds. “The virus has upended this spring’s college choice process. This year is the most challenging and unpredictable of my career.”

Has Veitch learned anything about his leadership team during the pandemic that perhaps he didn’t know? “Crisis reveals character,” he says, “and the character of the vice presidents to a person is extraordinary—their commitment to the institution, their thoughtfulness, their flexibility, their collegiality, their competence, and their good humor in the midst of so much drama and trauma. There is a métier for praise that people have come to discount—especially from college presidents—but I mean those words to their fullest.”

He can’t imagine any bigger challenges than his senior leadership and their staffs have faced during the pandemic. “Each person has been the difference between this institution going sideways or going forward. It’s hard to reckon any bigger responsibility than the one Vince has in bringing in an entering class, or that James Uhrich [vice president for information technology services and chief information officer] and his team had in enabling remote learning in the space of a week. Wendy helped her faculty understand what needed to be done to transition to remote learning, and Rob moved out legions of students safely.”

Amos Himmelstein, vice president and chief operating officer, “has his hands full helping us minimize the financial damage of all this and anticipating what we need going forward,” Veitch says. Marty Sharkey, vice president for communications and institutional initiatives and chair of the College’s COVID-19 Coordinating Task Force, “has kept us focused on the priorities and kept me from getting into the weeds and missing some important things that had to happen.”

Charlie Cardillo had his institutional advancement team “turn on a dime to focus our fundraising efforts to address Oxy’s immediate needs,” he continues—and with the success of Day For Oxy, the College has surpassed its dollar goal for 2019-20. (Cardillo even enlisted his TeleFund callers to assist the admission team in reaching out to incoming members of the Class of 2024.) 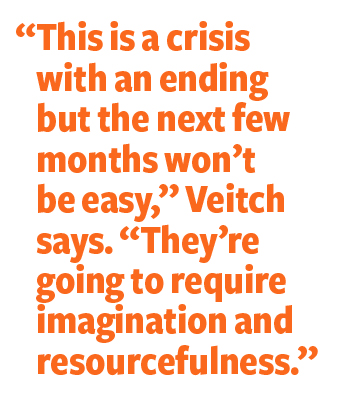 On April 22, Veitch announced the formation of a formal working group to assess essential changes in Oxy’s academic programs and other College operations for the 2020-21 academic year. (He has asked for recommendations and a report by the end of May.) Oxy is weighing multiple scenarios for the fall semester—from the traditional delivery mode to remote learning to some hybrid model in between. “All these different plans need to be thought through and stress-tested with financial and staffing implications,” Veitch says.

“To add to the complexity of the situation, we won’t know a lot of what we need to know for quite a while. Student deposits for fall are very strong so far [with the May 1 deadline for deposits extended in some cases by up to two weeks] but summer will produce all kinds of new information about whether or not the virus has been mitigated and what the directions are from county and state health officials.”

By the time the fall semester rolls around, Harry J. Elam Jr., vice provost for undergraduate education at Stanford University and Veitch’s successor as president, will be mapping out Occidental’s future. “Harry has been very engaged and bringing what he’s hearing at Stanford to us,” Veitch says. “Far from being daunted by what’s ahead for Oxy, he’s all in—and has demonstrated that with ongoing conversations with the vice presidents. We’re going to be in good hands.”

This wasn’t the way Veitch expected the final months of his presidency to go. He had been looking forward to the completion and dedication of three long-simmering projects: the De Mandel Aquatics Center, the Anderson Center for the Environmental Sciences, and the renovation of the Lucille Y. Gilman Memorial Fountain and surrounding plaza. “I sometimes tease the trustees that they promised me a victory lap,” he adds. “This has been anything but that.”

One unexpected side effect of the pandemic has been having all three of his children under the same roof with Veitch and his wife, Sarah. (Margaret, the oldest, is home from New York and writes for Interview magazine. Son Alex graduated from Stanford last year and is thinking about grad school. The youngest, Eleanor, has two years of high school remaining.) “I never expected to have them all back again except for the holidays,” Veitch says. “It’s like a reunion of The Beatles.” Everyone is getting along fine when they aren’t locked in discussions over what to watch together—“That is like negotiating the new NAFTA,” he says. And yes, they have seen Tiger King: “It’s the one program we can all agree on.”

When he’s not wrestling with COVID-19 or reflecting on the life choices of Joe Exotic, Veitch has been reading A Journal of the Plague Year—Daniel Defoe’s novel, published in 1722, about one man’s experiences in London during the bubonic plague of 1665.

“If I were to teach a class related to this, I would use a plague—whether it’s this one or the Great Plague of the 17th century—to explore what are the premises of social interaction and how easily it breaks down,” Veitch says. “I am interested in the whole idea of contagion and sociability and the fragility of human interaction and what has to be in place for people to be comfortable engaging with one another”—although the same themes could apply to Tiger King.