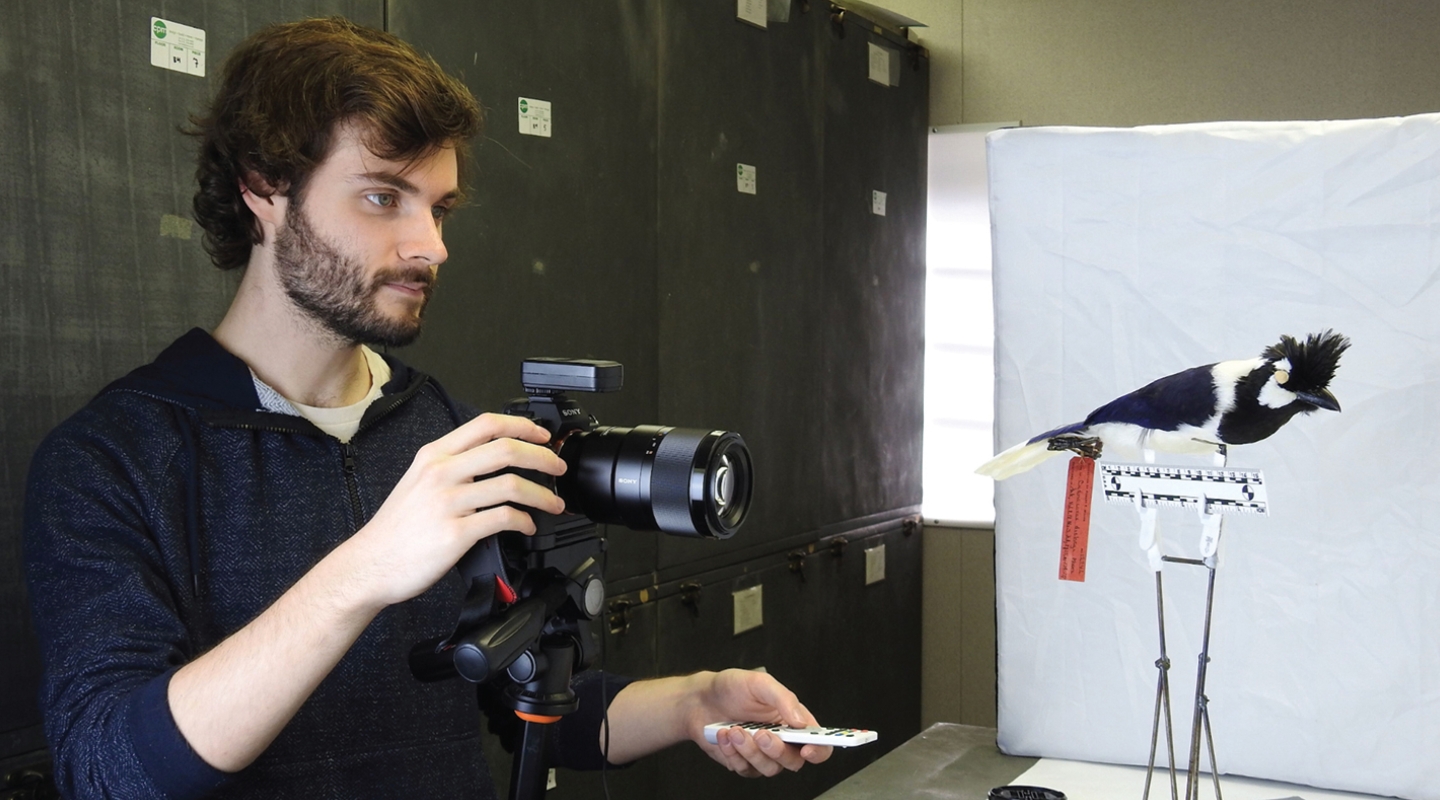 Tales of the Bird Dimension

Joshua Medina ’19 had long had an interest in 3-D modeling before he took a class his sophomore year from Damian Stocking, associate professor of comparative studies in literature and culture (CSLC). Stocking had recently returned from Greece with videos of classical sculpture and, knowing of Medina’s interest, asked him if he could create a 3-D statue mockup from the videos.

Having read a paper on photogrammetry—the extraction of three-­dimensional measurements from 2-D images—Medina, a CSLC major from Seattle, set to work. Then fate took a hand when he met James Maley, the collections manager of Oxy’s Moore Lab of Zoology, out walking his dog, Fred.

Maley gave Medina a tour of Moore Lab—home of the world’s largest collection of Mexican birds—“and I was absolutely blown away,” Medina remembers. “You get the sensation of being around a lot of hidden history, and all the DNA data likely could fill shelves. That feeling was just as striking as the beauty for me.” He soon realized that the 3-D modeling techniques he had used on Greek statuary could also be applied to bird specimens, and from that emerged a multi-year project to digitize the lab’s specimens in 3-D. That idea snowballed into a submitted journal article, an appearance on NPR’s Science Friday, and a National Science Foundation grant proposal.

In addition, Medina is the recipient of a prestigious National Science Foundation Graduate Research Fellowship. Awarded annually to candidates in the sciences and social sciences who are pursuing a master’s degree or Ph.D., the fellowship provides three years of support for graduate study leading to research-based advanced degrees and is intended for students in the early stages of their graduate work.

“Josh essentially started and ran his own research operation,” says John McCormack, associate professor of biology and director of Moore Lab. “He invented something that the evolutionary biology and systematics community needed: a way to analyze whole-organism, full-spectrum color.”

Although the coronavirus pandemic has complicated the graduate school process, Medina hopes to pursue his Ph.D. at the University of Massachusetts, Amherst, where biologist Duncan Irschick uses 3-D modeling to explore animal functional mechanics. Medina ultimately sees lots of possibilities for his technique for museum collections generally, although he’s not quite done with birds yet: “Using UV light, we’ve been asking questions about the colors we can’t see.”

Bhavna Shamasunder, associate professor of urban and environmental policy, is the recipient of a $479,480 grant from the National Science Foundation’s Division of Science, Technology, and Society for a study of women in immigrant communities in Los Angeles, Minneapolis, and New York City who use potentially toxic beauty products to lighten their skin. Titled “Race, Immigration, and the Public Understanding of Science: The Case of Skin Bleaching,” the study’s goal is to examine women’s understanding of the risks involved in using the products and their rationales for doing so.

The project first uses archival sources to understand the global skin-lightening market, how mercury came to be added as an ingredient, and efforts by companies to replace it with less toxic alternatives. Second, it examines how diverse communities perceive scientific and public health information about chemical toxicity, their reasons for purchasing skin-lightening products, and whether and how scientific and public health data influences consumer choices.

Regions with low-income populations and low Internet penetration are less likely to follow safe-at-home orders and are thus more vulnerable to the COVID-19 corona­virus, according to a new study co-authored by Lesley Chiou, professor of economics at Occidental, and Catherine Tucker, Sloan Distinguished Professor of Marketing at MIT Sloan School of Management.

Titled “Social Distancing, Internet Access, and Inequality,” the study is based on voluntary tracking data from 20 million cellphones nationwide and demographic data from the U.S. Census’ 2018 American Community Survey. The results suggest that policymakers should consider the impact of the digital divide in fighting the pandemic.

“Income inequality is cited as one of the chief causes of why some individuals are able to stay-at-home and limit exposure to coronavirus while others cannot,” says Chiou. “But while we found that income is correlated in differences in stay-at-home rates, it is the unequal distribution of high-speed Internet in homes that appears to drive much of this disparity. In this case, access to the Internet represents access to potentially life-saving choices.”