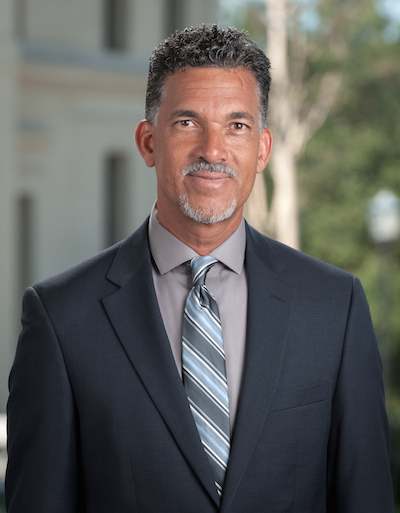 Kerry Thompson is nothing if not hands-on. When he noticed Western bluebirds nesting in the Bell Field dugout earlier this summer, the erstwhile biology professor built birdhouses for them, placing them "at the ideal nesting height." That handiwork ­actually makes perfect sense for someone who loves problem-solving and is committed to doing whatever the College needs.

When Jorge Gonzalez stepped down after six years at Oxy to become president of Kalamazoo College in Michigan on July 1, Thompson assumed his new role as interim vice president for academic affairs and dean of the College. In the months leading up to the transition, Thompson shadowed Gonzalez, filling in for him when he was out of town; attended deans' conferences, including the annual deans' meeting in Annapolis, Md.; and read up and talked to many people.

"Most deans will tell you it's a job you learn on the ground," says Thompson, a 53-year-old married father of four (ages 31 to 8). "You learn it by doing. But you need certain competencies going in. You need qualities like integrity, fairness, loyalty—loyalty to the College, loyalty to people."

Acknowledging his lack of prior administrative work, "I assume they balanced my weaknesses with my perceived strengths," he says of President Veitch and his cabinet. "And I am devoted to proving them right. I'm going to do the best I can for this College."

"They are distinguished faculty with long histories of service," Thompson says. "We are a team. I want to be both a great team member and an effective team leader. They may have accepted these positions because they want to go on to administrative work. They need to be mentored and given the opportunity to succeed."

Beyond community-building, Thompson says he'd like to streamline College procedures: "You've got multiple approaches, but they never become coordinated activities where they're all on the same page. I'd like to add coherence to our efforts so that they are more effective to our goals of producing excellent students and excellent scholarship. I can't do it in one year as an interim, but I can start pushing us in that direction."

He says he also wants to be a "myth-buster" about the purported wall separating administrators and faculty. "That is a myth," he says. "Faculty don't think you can be an advocate for the faculty and be an administrator. That isn't true. We're all on the same team." He says he isn't sure how to achieve that yet, but "I believe in the power of food and coffee."

In addition to his new administrative duties, Thompson recently assumed the co-directorship of Oxy's Multicultural Summer Institute, the four-week academic/residential program for approximately 50 incoming first-year students from a variety of backgrounds. He also has worked as a research biologist at the VA Medical Center for the last 15 years. His research interests include Parkinson's disease, neurodegenerative disorders, and epilepsy, and he has investigated the use of stem cells to treat such disorders.

Thompson hasn't decided yet whether the deanship is a role he will want to take on permanently, although he says, "Personally, what I'm hoping is that the same thing that I love about working in the lab—problem-solving—can be translated into this position. Solving problems for people and the institution. Then I could see this being something I could do."

He will give up teaching while serving as dean, which creates "promise and regret." "With other faculty I'm collegial, but I consider the students my friends," he says. "We play basketball and tennis and go running together. I don't like the hierarchical approach with teaching. You need to have a sense of authority and respect, but I try to reduce that gap so that I'm talking to equals."

However, Thompson says he never felt the connection to the UCLA community that he feels to Oxy. Having taught at Occidental for 11 years now, he adds, "When you hire a dean from within, you hire someone with a built-in love of the institution." That means someone who is ready to roll up his sleeves and do whatever the College needs, whether building birdhouses or bridges.—SAMANTHA B. BONAR '90