Outside the Box | Occidental College 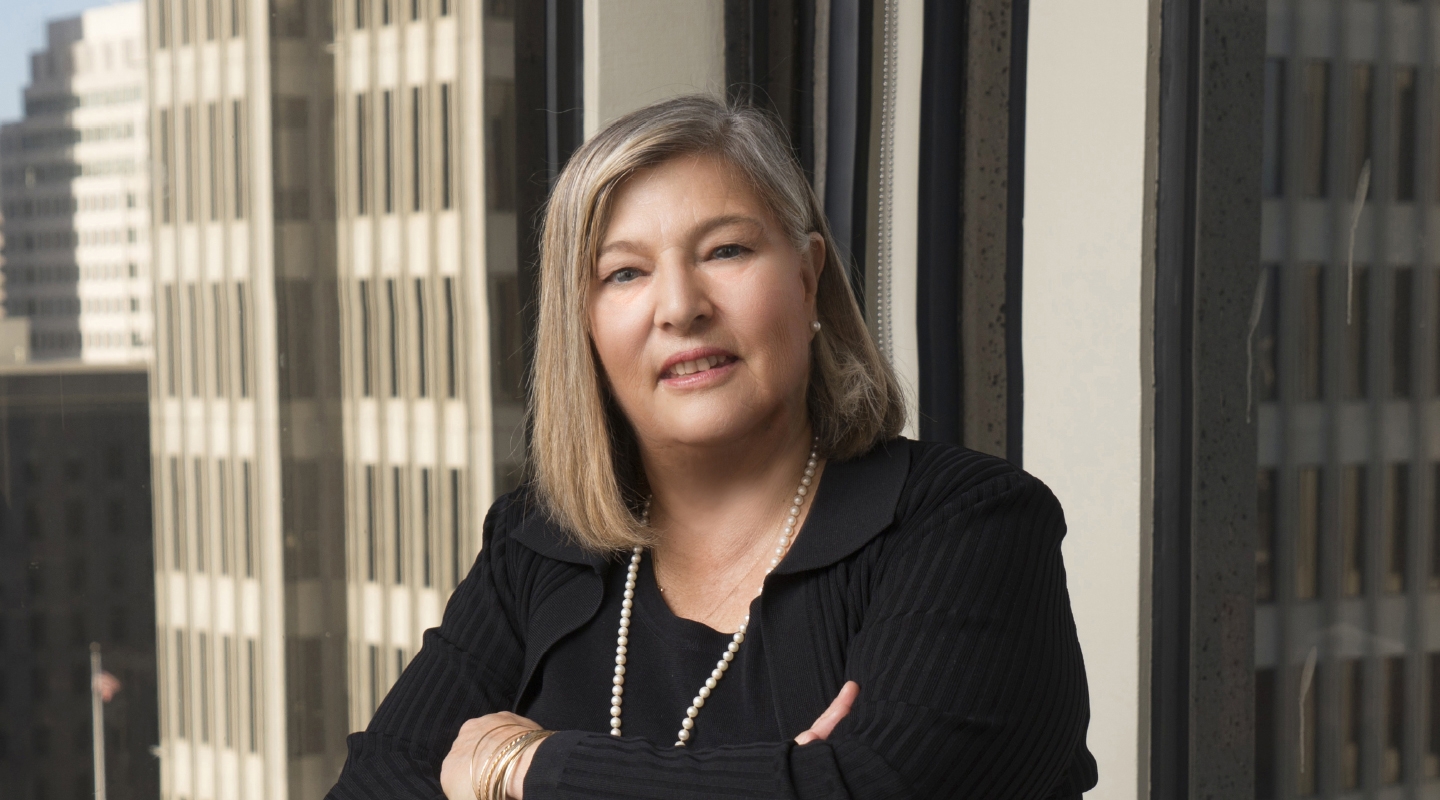 Over a 40-year career as a civil trial lawyer in Big Law and advocate for gender equity in her profession, Patricia Kruse Gillette ’73 wouldn’t have been successful without her ability to connect to people. Whether it’s speaking in front of a jury, presenting to a group of female law students, or working with a client, “She has the uncanny and pragmatic ability to find common ground so that effective solutions to difficult problems can be fashioned,” says Roberta Liebenberg, a senior partner at Fine Kaplan and Black in Philadelphia, whom Gillette first met in 2009. 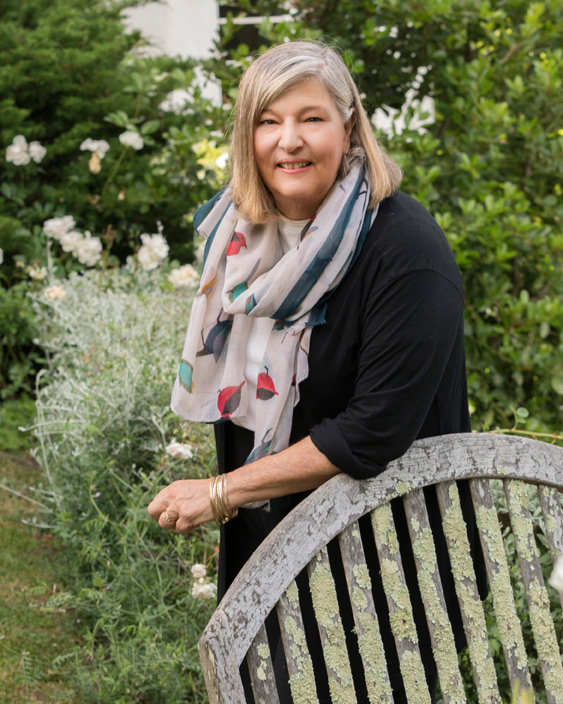 Sometimes it’s her passion and dedication that resonates with others. Sometimes it’s her presentations—a mix of storytelling and humor. And sometimes—as was the case at a 2016 conference in Arizona—it’s her singing. Gillette’s presentation was called Feminism 2.0, and she serenaded the audience with a jingle that Phillip Morris used to introduce its new Virginia Slims cigarette brand in 1968. (The lyrics were later used in print advertising following the ban of cigarette ads on radio and television.) “You’ve come a long way, baby, to get where you got to today. You’ve got your own cigarette, baby. You’ve come a long way.”

“This was feminism in the 1980s,” Gillette told her audience following the song. “Women finally had the right to kill themselves just like men, only with a ‘feminine’ cigarette.”

Debbie Epstein Henry—a best-selling author, consultant, and public speaker who also presents on women and workplaces—was in the audience that day. “That moment crystalized for me what is so powerful about Pat’s messaging,” she says. “It’s original and fresh, and you can never predict what she will do. All you know is she will make an impact, delivering a new idea with confidence and grace, as well as a dose of humility.”

In 2016, Gillette joined the San Francisco office of JAMS, the largest private alternative dispute resolution provider in the world, as a mediator in employment disputes. And more than a decade ago, she founded a nationwide initiative focused on changing the structure of law firms to increase the retention and advancement of women in the workplace.

“I really believe the legal industry has to change radically if it’s going to survive,” says Gillette, who will be honored in August at the American Bar Association’s national meeting with the Margaret Brent Women Lawyers of Achievement Award for her work promoting women in the legal profession. “The values that have been part of our industry are not consistent with the values that people have today. And that’s problematic. My goal is to think outside the box, come up with creative solutions, and give people and organizations ways to implement them.”

Growing up in South Central Los Angeles in a predominantly Japanese neighborhood, Gillette was raised by parents who pushed their own boundaries. It seems inevitable that she would go on to do the same. Her father, Albert, set out for California from Indiana at age 16, eventually serving as a supervisor for a truck-spring manufacturer in Los Angeles. He could fix anything, Gillette recalls, and taught his four children there was no barrier they couldn’t break. Her mother, Evaline, lost both her parents at a young age and lost her first husband in a chemical-plant explosion; even so, she imbued Gillette and her siblings with a sense of optimism and an obligation to give back to those less fortunate. Evaline devoted her life to the children of South Central Los Angeles as a middle school English teacher, and was recognized as California Teacher of the Year in 1985.

Gillette’s path to law school became clear as a political science major at Occidental, which she applied to after visiting her cousin, professional football player Robert Khayat, who was training with the Washington Redskins on the Oxy campus (and who later served as chancellor at the University of Mississippi). A constitutional law course taught by professor Richard Reath showed her that law was a good route to right some wrongs. He and her other professors were supportive of the type of innovative thinking that would set Gillette apart in her legal career.

After graduating from University of San Francisco Law School in 1976, Gillette wanted to be a plaintiff-side employment lawyer. “I thought that civil rights acts were important and needed to be enforced,” she says. “I wanted to be on the plaintiff side so I could sue corporations that weren’t following the law with respect to women and minorities.”

But there were few open jobs on the plaintiff side at that time. So Gillette went to the management side, going on to spend the bulk of her career representing Fortune 200 corporations. And as a trusted adviser to these organizations, Gillette discovered she could have far more impact. “If an employment lawyer sues, many companies automatically enter into defensive mode to find arguments to justify their position,” she explains. “I found by being on the defense side, I had credibility in the corporate suite and could fight for changes that directly influenced and changed problematic policies and practices.”

Over the years, Gillette became a top-rated trial lawyer, focusing on all aspects of employment law, including litigation of wrongful discharge and discrimination class-action cases in both state and federal court, representation of employers before administrative agencies, and counseling and training employers on preventive personnel practices. Gillette even represented a few celebrities during her career, including Julia Child, who was accused of discriminating against gay employees—charges that were later dismissed. (Child’s response to the allegations? “Pure nonsense.”)

One day, Gillette took Child to lunch at a high-end restaurant in an effort to impress her client. “Julia was immediately recognized by everyone in the place,” Gillette recalls. “She was gracious and accommodating to all the people who came to give homage. And when the waiter asked Julia what she wanted for lunch, she said, ‘I’ll have a hamburger and a bottle of wine.’”

Gillette’s work as a jury trial lawyer earned her much recognition, including being named among the Best Lawyers in America by Chambers USA for most of her career. And while she held leadership positions and had a large book of business, as they say in legal circles, this was atypical for most women in her firms. 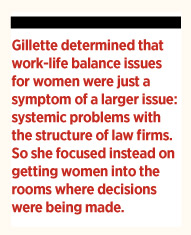 “So I wondered why,” Gillette says. “And that led me to realize that women were spending too much time talking about work-life balance, and not talking about getting into positions of power and leadership in their firms. I also concluded that issues relating to work-life balance were simply a symptom of the larger issue that was holding women back: systemic problems arising from the structure of law firms. So I decided to focus on getting women into the rooms where decisions were being made, so that we could then use that power to bring more balance and flexibility in the workplace for all attorneys.”

Her first attempt at that change began with the Opt-In Project, a nationwide initiative she founded in 2006 that focused on modifying the structure of law firms to increase the retention and advancement of women.

“The structure of law firms is archaic. And the issues that were driving women out of firms are the same issues that are driving out millennials.” Gillette says. “The system is not set up to provide the work environment or rewards that make women, or the next generation of lawyers, stay in the field.”

So she went on the road to spread the message. Epstein Henry first met Gillette at an Opt-In event in New York and was immediately impressed with her ingenuity. “We talked at the reception, and I was immediately drawn to her boldness and willing to take a stand,” she says. “She is driven to inspire, and that is what makes her so effective at what she does.”

Since Gillette’s first presentation for Opt-In in 2007, she has become a national voice for women, advocating for women’s rights, and not just in the legal industry. Her presentations, aimed at both individuals and businesses, focus on leadership and business development for women, and solutions to confront institutional barriers facing women and minorities.

In addition to her speaking engagements and her mediation work, last fall Gillette published Rainmakers: Born or Bred, based on a study she initiated focusing on the personal characteristics that make rainmakers successful. She also mentors young women in the legal industry, and she recently helped put together a group of experts to assist attorneys, who are not experts in employment law, bring claims on behalf of clients in connection with the Time’s Up movement.

What makes Gillette and her work stand out is that she’s providing people with innovative solutions based on her own experiences as a lawyer. Gillette credits her success to the environment she found as a student at Oxy and the think-outside-the-box mentality that she learned from her professors.

And Gillette can thank Oxy for another important part of her life: her husband of 44 years, Dane Gillette ’72, who worked closely with then-attorney general Jerry Brown and later Kamala Harris as chief assistant attorney general for the Criminal Division before his retirement in 2014. Dane and Pat met through mutual friends and began dating after studying together in Haines Hall for Professor Reath’s constitutional law class. The couple, who have lived in the East Bay community of Kensington for the last 40 years, raised two sons: Andrew, a professor of math at the University of Arizona; and Ryan, who works for the Harvard Government Performance Lab helping to find effective ways to address issues such as homelessness, recidivism, and affordable housing.

From Dane’s perspective, Pat’s intelligence, strategic ability, and thoughtfulness make her a natural leader. “It is clear from the women she has mentored to the leading role she has taken in advancing the role of women in the legal profession that Pat has more than earned the respect and admiration of her peers,” he says.

Back in 2012, Gillette was elected to the equivalent of city council in Kensington, winning in a landslide vote and serving a four-year term. “The real reason I ran is to say that Barack Obama and I were on the same ballot,” she says with a laugh. Her service “convinced me that all politics are local and that I never wanted to run again for anything!”

Some years back, Gillette bought several cases of chocolate-covered wine bottles, sight unseen, to give as holiday presents to her clients. When the cases arrived at her office, she discovered that the message engraved on the boxes holding the wine bottles turned out to be extremely romantic—bordering on pornographic. Undeterred, she sent out the wine with a note. She advised her clients, as their employment lawyer: Never send a present like this to an employee.

Freelance writer Kelley Fruend lives in Newport News, Va. This is her first article for Occidental. Photos by Jim Block.