There was a professor named Joe | Occidental College

There was a professor named Joe

In addition to mentoring scores of geohydrologists, professor emeritus Joe Birman—who died at 91—loved his work, apple trees, and a well-turned limerick

While driving long distances across the California desert, professor of geology Joseph H. Birman's mind turned frequently not to water, but to poetry. He penned many a limerick about his fellow Oxy faculty, such as this one about the late John McMenamin '40:

Intent upon hearing the worst:
"Did the egg or the chicken come first?"
John McMenamin's yen
Was to query a hen
What a strong intellectual thirst!

Birman, who died Dec. 23, 2015, in South Pasadena at the age of 91, never lost his enthusiasm for wordplay, or his work as an engineering geologist. (Birman preferred the term "geohydrologist," as he declared in a 1996 speech at a meeting of the Ground­water Resources Association of California.) 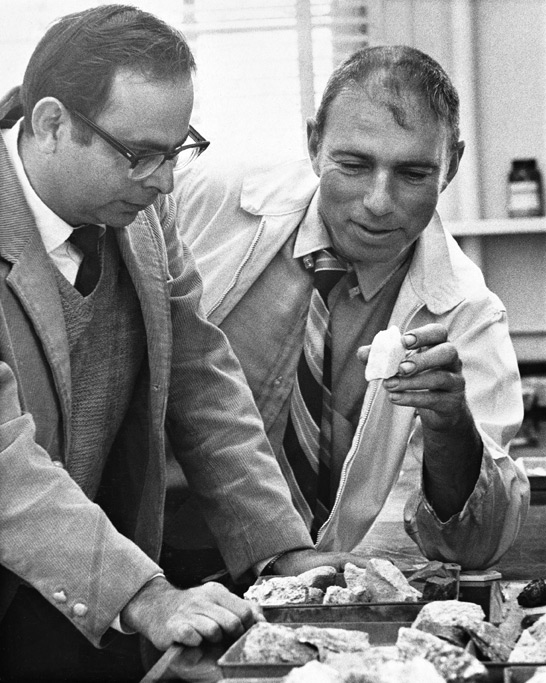 A native of West Hartford, Conn., he did his undergraduate studies at Brown University, received his master's from Caltech, and completed his Ph.D. at UCLA. He served in the Occidental geology department from 1949 to 1984, and received the College's Faculty Achievement Award in 1972.

An authority on glacial geology, Earth temperature, and hydrology, Birman inspired countless students to take up the study of geology, including the late Eleanor Helin '54, who helped create JPL's Near Earth Asteroid Tracking program.

He also amassed more than 60 years of original scientific research, from mapping the paths of the glaciers that once dominated Earth, making the case for early civilization in the Persian Gulf, to inventing the technology that uses shallow temperature probes to detect the movement of groundwater. In 1961, he founded Geothermal Surveys Inc., a company engaged in geology, water exploration, and water well design and testing. He remained active as president until his death.

"My brother [Daniel] and I grew up in the shadow of a creative scientist, a critical thinker, an artist, and a friend to students, colleagues, and clients," son David wrote after his father's death. "He so enjoyed everything he did, and the greatest lesson we learned is that work should never really be a job."

In addition to his sons, he is survived by two grandchildren and four great-grandchildren. He was preceded in death by his wife, Barbara, a nurse who returned to Oxy to study for a B.A. in economics, graduating in 1975. Three years later, she and Birman returned to campus from a trip to England with an apple from the tree of Sir Isaac Newton. Within 12 years, a seed from that fruit had grown a healthy 10-foot-tall apple tree on the south side of Herrick Interfaith Center. It endures today as a reminder of Birman's love for Barbara and his dedication to Occidental.

I entered Oxy as a physics major and took Joe Birman's introductory geology class to fulfill the science requirement. Up until then, I thought that geologists collected rocks and not much more. In that class Joe made geology sound so exciting—it was a field about which so much was unknown—I asked to meet with him to discuss changing my major. One of the questions I asked was about the health of the job market in geology.

Joe: It's very hard to get a job now in geology.

Joe: Jobs in geology tend to follow ­cycles, primarily tied to the activity in the oil industry, and by the time you graduate, the job market will be very good, particularly if you get a Ph.D., which I encourage you to do.

From then on and with Joe's guidance it was full steam ahead—I was focused on becoming a geologist with a Ph.D.

Joe was exactly right. By the time I graduated with my Ph.D. from UC Berkeley I had multiple job offers. More importantly, it was an exciting time for geology and geophysics because the ­theory of plate tectonics, which totally revolutionized our understanding of the history of and processes in the Earth, would be formulated over the next few years, from 1963 to 1967, and I was fortunate enough to play an important part in that revolution.

Joe taught me many things about the Earth and about life. One of his more important lessons was how to make a most excellent spaghetti sauce in a frying pan over a campfire. My wife, Sharon Tramel '59, and I have ditched the frying pan and the campfire, but still use Joe's recipe.

During an important phase of my life, Joe was my teacher, mentor, confidant, and friend, and I owe him much for starting me on a satisfying and productive career studying the Earth.

National Medal of Science winner Brent Dalrymple '59 is professor emeritus of geology and geophysics at Oregon State University. His books include The Age of the Earth and Ancient Earth, Ancient Skies.