On a Mission | Occidental College 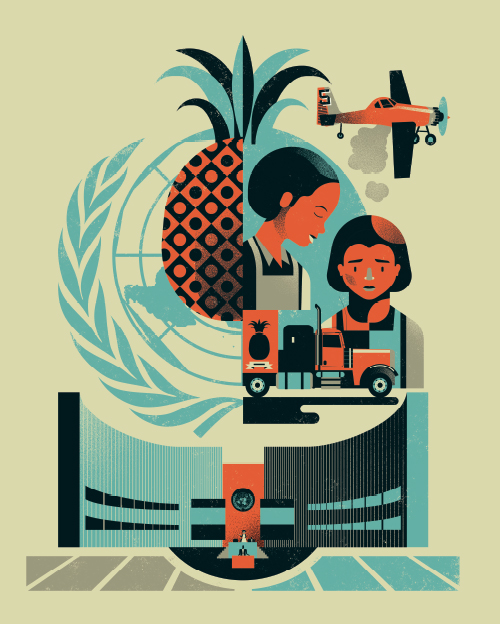 For more than three decades, Oxy students have experienced the United Nations from inside the Secretariat Building. Now their work extends into the fields of Costa Rica

Cassandra Madrazo ’19 first learned about the Oxy-at-the-U.N. Program on a campus visit four years ago. Her admission tour guide was an Oxy senior and U.N. intern who talked enthusiastically about the experience. “The idea of the United Nations was so abstract to me, so big—I couldn’t believe that an undergrad college even offered something like that,” says the first-generation college student, a diplomacy and world affairs and studio art double major from Los Angeles. “I was immediately hooked.”

Since its founding in 1986 by George Sherry, former U.N. assistant secretary-general for special political affairs, the William and Elizabeth Kahane United Nations Program has offered Oxy students the oppor­tunity to live in New York City and do hands-on work with agencies or diplomatic missions for a full semester. A classroom component rounds out their understanding of the U.N.’s work in maintaining international peace, protecting human rights, delivering humanitarian aid, promoting sustainable development, and upholding international law.

In recent years, thanks to a $5.5-million gift from Elizabeth and Bill Kahane ’70, Oxy-at-the-U.N. has broadened its scope to include a weeklong visit to Costa Rica “to work on very practical problems there and see how the U.N. operates at the field level,” explains Douglas Gardner, who became the program’s third director in 2012 (succeeding John Hirsch, currently a senior adviser to International Peace Institute president Terje Rød-Larsen) after 30 years with the U.N. Development Programme.

“People hear about the United Nations on the news when there’s a meeting in the Security Council, or there’s an issue with Syria, or there’s a jetliner shot down by another country,” he adds. “What they don’t see are the totally dedicated, committed people working for peace and development, human rights, and the environment. They also don’t see the 80 percent of U.N. staff working at the field level—on Ebola in Africa or governance in Cambodia. It’s really a field-based organization.”

Gardner’s hope is “that students will take away the extraordinary nature of what the United Nations is doing, and of being part of and supporting a team.” He and a handful of Oxy seniors who were among the program’s 18 participants in its 33rd year sat down at Oxy’s United Nations Plaza address in December to discuss their internship experience and the challenges they witnessed firsthand facing tropical crop workers in Costa Rica.

Rhea Bhatia ’19, a psychology major from Singapore: Oxy-at-the-U.N. is an opportunity for students to get real-life working environment experience within the United Nations. Students either are put into country missions—for example, you could work for Rwanda, or Guatemala, or Costa Rica—or you’re put into an agency such as the U.N. Population Fund, the U.N. Foundation, or the U.N. Development Programme, which is what I did [under the Bureau of Policy and Programme Support for its gender team]. The work that the two types of groups do is extremely different, but both are very effective in knowing how the U.N. works and understanding the bureaucracy of an international organization as a whole.

Gardner: We see the students come in at orientation a bit nervous—very talented, but not sure what they’re getting into. The first reward for Professor Fomerand and me is seeing the true transformation that takes place in these gifted academics who become gifted young professionals in a fairly short time.

Bhatia: The first day is daunting. I will not even sugar-coat that. You really have to hit the ground running. Oxy has prepared you for this. You are knowledgeable and capable, so you should just go head first into it.

Zachary Solomon ’19, a diplomacy and world affairs major from Portland, Ore.: One of the strengths of this program is that I have never been treated like an intern at my work from Day 1. Our supervisors treated us as professionals. The U.K. Mission gave me hard work and the resources to do it.

Mia Coleman ’19, a diplomacy and world affairs major from Boston: I arrived at the perfect time, because my supervisor was working on the release of two major studies on women and young persons with disabilities, and providing gender-responsive and rights-based services for sexual reproductive health and rights. In September we launched the global study during the U.N. General Assembly. A typical day for me at the time was running around, calling offices, translating letters of invitation to the Prime Minister of Morocco, and then it calmed down for a little bit and I was doing some writing and editing.

Madrazo: During General Assembly Week, I went in as a representative of UNICEF, and usually sat somewhere in the back and listened quietly to people like Justin Trudeau from Canada, or Theresa May from the U.K. And they’re about 30 feet from me, and I could take as many notes as I like. Another time I saw the former president of Chile at the Vienna Café, which is like our Starbucks inside, hanging out, having a cup of coffee. This is something I’d never see outside in the real world.

Ashley Leon ’19, a history major from Los Angeles: We have been working with various missions and agencies for a number of years now. Based on our set of skills and their set of needs, they place us accordingly. For me, knowing that I’m interested in Latin America and that I know Spanish, they placed me with the Guatemalan Mission.

Solomon: The semester is really a hurricane of activity from start to finish. You are using the things in your classes at your work, and you’re talking about the things you’re doing in your work in your classes. And you’re also experiencing New York City, and going to tons of events at the U.N. and with different NGOs.

Leon: The classroom component is broken down into three courses: conflict prevention, human development, and our U.N. experience, in which we debrief and discuss certain things about our internships, like leadership styles.

Conflict prevention is taught by Jacques Fomerand [adjunct assistant professor and assistant director of Oxy-at-the-U.N.], and we talk about peacekeeping, peace- and capacity-building, migration, climate change, and all the works. One of the cool things that we get to do is produce policy briefs or memorandums of law. The idea is to address them to our supervisors at our internships, and hopefully give them something academic that maybe they could use in further research.

Bhatia: Jacques tries to connect what we are doing in our internships and the main themes that are going on at the U.N. with how they relate to conflict prevention and what the flaws are in conflict prevention. Every week three or four students take on a subtheme, do the readings that are assigned for it, and create a simulation in class for us to learn. So we’re engaging in these mock situations. And the way that some of my classmates have created the most engaging and innovative ways to make us critically think about conflict prevention is astounding.

Leon: In our human development course, which is taught by Professor Gardner, we dive deeply into the task force report on tropical crop production in Costa Rica and its impact on women.

Coleman: We went to Costa Rica for a week in October to conduct research and interviews and in turn write a gender analysis of tropical crop production.

Bhatia: Tropical crops are the country’s most profitable industry, but it really affects communities that are closest to big plantations. The more you have to produce, the more agrochemicals you have to use.

Solomon: We met with a bunch of people in various positions of society, from farm workers and agricultural activists to the U.N. team and the government.

Madrazo: Professor Gardner has been super helpful in facilitating the process and making us think about the details: What kind of questions should you ask when you are doing an interview or conducting research? How can you be sensitive to those people whom you’re talking to?

Bhatia: The most memorable activist that we talked to, Zinnia, took us out to a plantation that has been affecting her community. They’re drinking water that is essentially killing them, and they don’t even know that it’s happening. Zinnia found out when she was pregnant because her baby had some issues, and so when she tried to complain, she got death threats and was isolated from her community. People thought she was crazy because there’s a culture in Costa Rica where masculinity is so ingrained that if a woman says anything that steps out of these norms, people are going to act out.

People need to understand and know about an issue before they can act on it. And we haven’t even gotten to the first stage yet. Did you ever hear about tropical crop production issues for women in Costa Rica? No!

Gardner: We’re hopeful that our client, which is the U.N. in Costa Rica, will use this report as an arrow in their quiver to advance gender issues in the country.

Bhatia: The main thing we learned from the trip to Costa Rica is how essential it is for people who work at the U.N. to go into the field. Oftentimes people forget that the work that we’re doing up here is affecting real individuals on the ground. And we have to see how they are being affected in order to ensure that our policies aren’t just words on a paper or a PowerPoint.

Madrazo: We were talking in the group chat amongst the 18 of us, and saying, “God, we knew nothing.” We all had a million different ideas and it could go a ton of different ways. Now we have this fully polished report that is clear, concise, and well structured. And it didn’t just come out of nowhere. It came out of a ton of guidance and a lot of work, arguments, and debates. And it’s done.

Gardner: The second reward for us as professors is staying in touch with students after they graduate—seeing where they go and what they do, and how they leverage this experience going forward in their careers and making a difference on the planet.

Madrazo: This program has just given me not only the connections of people I’m working with but true friendship. People that I never would have met before, because they live in New York and work at such a high-profile place, I now can WhatsApp message with them. After I graduate, we’ve had conversations about working together in the future. So career-wise, absolutely, my life will be dramatically altered. My family migrated here from Cuba. My grandfather was a janitor. My grandmother cleaned houses. So the idea of me working at one of the highest institutions in the world, on the international stage, it’s changed the course of my life, and my family’s life.

Solomon: Oxy-at-the-U.N. is an amazing experience. You will be pushed and tested, but you’re going to come out stronger and a more mature, better person at the end of it. It really is a remarkable exposure to people, places, and topics that you just can’t get anywhere else. This is definitely the hardest I’ve worked at any semester at college, but by far the most rewarding.