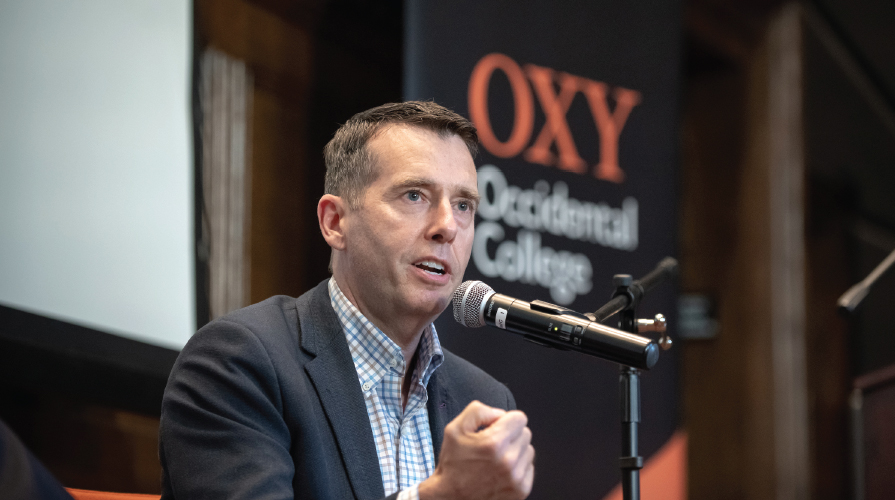 American politics may be “ugly, small, and unimaginative,” but the only way to change the country’s direction is to win elections, former Obama campaign manager and White House senior adviser David Plouffe told a packed Choi Auditorium on October 19 as the inaugural speaker in the College’s Obama Scholars Speakers Series. “Everything that affects you is based on who you elect,” Plouffe said, urging his audience to remain engaged in the political process as he analyzed the possible outcomes of the November 6 midterm elections.

In addition, Plouffe addressed a wide-ranging series of topics in his talk, which was moderated by Clapp Distinguished Professor of Politics Peter Dreier and former California state senator and current Occidental trustee Hector De La Torre ’89. A few highlights from his remarks follow.

Why Trump won in 2016: “Generally in history, particularly after a two-term president, a lot of voters are not looking for a replica. George W. Bush differed in many ways from Bill Clinton; Barack Obama was very different than George W. Bush. Donald Trump won the election by the rules that we have embedded in the Electoral College but he still got 46.1 percent of the vote. I think the worst a Republican presidential candidate can do these days is probably 44½ or 45, so we live in a divided country.”

On the record number of women and candidates of color running for office: “When people see someone like them seek office, it makes it more likely they would seek offices when they see the win because a lot of the barrier to running for office is ‘I don’t know how to do this; I don’t know anybody in the party.’ Well, you don’t need to know anybody anymore. … If you’re a compelling person with a compelling message and you excite people, you can build a winning campaign, and that’s what’s so exciting to me.”

On the 2020 election: “Even those of you who are political animals want a break. But Trump is deep into his re-election campaign already—that’s never happened in American political history. … We’re going to have this presidential campaign hanging over us not just in 2020 but in 2019, too. And that sucks up so much oxygen. So that’s the other thing that the Hill Democrats have to think about—whatever they’re doing on the floor in September 2019 is going to be far less interesting than what’s happening in Iowa in the presidential primary.”

On the risks and reasons for running: “Being president does age you in ways that are quite visually available to everyone. It’s a really tough job and you shouldn’t run because you want to be Donald Trump—that’s not the right reason. You need to run because you think you have something unique to offer the country in that job. …

“But also you’ve got to be ready to deal with Trump, OK? Running for president used to be considered like a symphony or a concert pianist. … This is like Mad Max: Fury Road—and that’s the way [Trump] likes it. And he’s very skilled at it.”