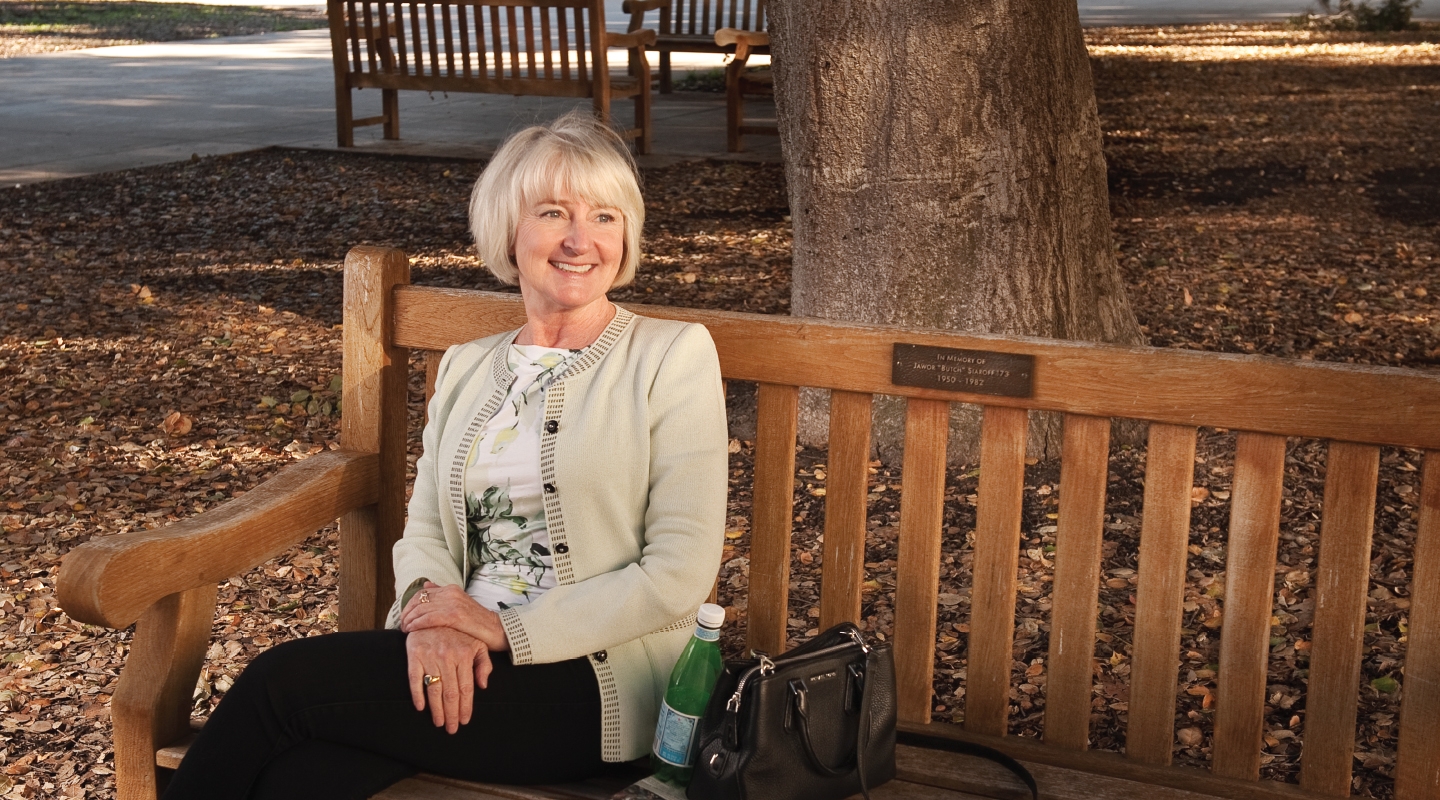 Through her commitment to the College as a trustee, volunteer, and benefactor, Anne Cannon ’74 champions the value of a liberal arts education

Anne Wilson Cannon ’74’s life has followed anything but a straight line. Oxy was her first choice for college, but she left after her junior year to transfer to the University of Pennsylvania to study accounting. She had a successful career as a CPA, financial analyst, and financial adviser but also spent nine years as a partner in a Hong Kong art gallery that featured contemporary Vietnamese painters. After a 30-year absence, she returned to Eagle Rock in 2005 to finish her anthropology degree, graduating a year later on the same day son Joshua completed his studies at Bucknell.

Over the last dozen years, a new relationship with Oxy has emerged: an unwavering commitment to service to the College. She joined the Board of Trustees in 2007, took on major leadership roles, and now has quietly become the donor of one of the largest gifts in the College’s history. For Cannon, there is a compelling logic to it all: Her experience as an undergraduate at Penn and throughout her career repeatedly demonstrated the value of her Oxy liberal arts education. And the year she spent on campus as what she euphemistically refers to as a “mature student” gave her a new appreciation for the latest generation of Oxy students.

“Like many of my peers, I was concerned about Oxy’s decline in the rankings [in the mid-1990s] and what was going on at the College. When I returned as a student, I was knocked over—I was so impressed by how bright the students were,” Cannon says. “They were every bit as bright, curious, thoughtful, creative, earnest, and clueless as we were 30 years before. Seeing that firsthand was what got me really jazzed about the College, and wanting to become involved in a meaningful way.”

Cannon didn’t have to be recruited to become a trustee—her level of enthusiasm was such that she floated the idea herself to then-President Susan Prager. “I can’t think of a more effective advocate for a liberal arts education, a more engaged trustee, or a more committed leader to building a new culture of philanthropy at Oxy than Anne,” says President Jonathan Veitch. “She leads by example, and Oxy has benefited enormously from her leadership and her generosity.” 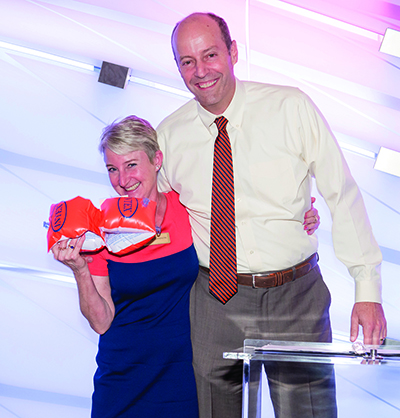 “I’ve worked with lots of trustees over the last 50 years, and Anne clearly is one of the most devoted to the College,” board chair emeritus Steve Hinchliffe ’55 says. “Everything she takes on she takes very seriously, works hard on, and does well.”

When Cannon first arrived at Oxy in 1970, the first-year lookbook listed her home address as Madrid, Spain. It was just the latest in a series of foreign addresses for her family, driven by the job assignments of father Bob Wilson, an oil company executive. (Cannon was born in Boston while her dad was finishing his doctorate in chemical engineering at MIT.) First was Buenos Aires, the Argentine capital, where Cannon finished ninth grade, followed by London—“this was in 1967, and London was a pretty happening place,” she notes. The following year, Cannon traveled back to the states to finish high school at Dana Hall, the girls boarding school in Wellesley, Mass. 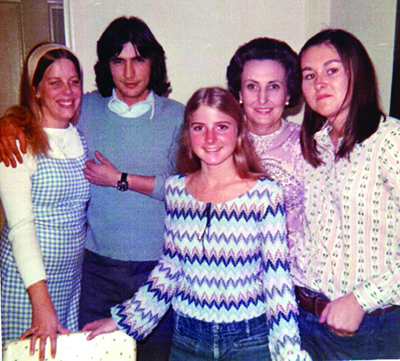 As a high school senior, she had made up her mind she wanted to go to Oxy, where her brother, Charlie Wilson ’73, was already enrolled. “I would not consider, much to my father’s chagrin, going to a women’s college,” she remembers. “Oxy was my No. 1 and only choice.” Oxy was small, located in a big city, “and in comparison to other small liberal arts colleges, Oxy had a fairly diverse student body by the standards of the time,” Cannon says. “That was important to me because although I was American, my school experience had exposed me to different cultures, and I had friends from different countries. I felt different and culturally I had a different view of America and the world.”

Cannon’s parents, however, had more old-fashioned ideas. “They sent me to Oxy to find a husband to take care of me,” she says with typical candor. “I was handicapped by being petite, cute, and blonde with a happy personality, and it was very easy to not be taken seriously. That’s how my parents looked at me.”

During the fall of her junior year, with no husband in sight, “I began to consider the idea that maybe I wanted to have a career and be respected for my brain,” Cannon says. When she finally worked up the nerve to tell her parents about her new plan, “Dad’s eyes widened in shock. He suggested I should become an executive secretary,” she remembers. “I said I can’t see myself serving coffee. It was my mother who suggested I become a CPA—they play with numbers all day, and I had always liked numbers.”

So it was with a new purpose that Cannon transferred to the University of Pennsylvania, where she graduated from the Wharton School in 1976 with a degree in economics and accounting. She couldn’t help noticing the differences between Oxy and Wharton. Many of her classes at Wharton were taught by graduate students who were less than enthusiastic about being in the classroom. And in two years, she was asked to write only one paper. “I gained a great appreciation for what I had left, such as the opportunities to delve into a subject, research it, substantiate an opinion, and make an argument,” she says. “Penn was harder to get into, but Oxy was the better school.”

The writing and critical thinking skills she learned at Oxy stood her in good stead during her professional career. “There is a surprising amount of writing that is done in audits,” she says. “I remember one assignment for a big client—research accounting methods for real estate development—so I had to read all the literature, understand it, and put it into practice. They were impressed that I could figure that out. I appreciated Oxy more and more as time went on.”

On the ground floor of the Arthur G. Coons Administrative Center, two comfortable black leather sofas greet visitors at the bottom of the rotunda. Since their installation several years ago, they have been put to good use: by visitors to the College, by administrators and staff, and most frequently by students reading, checking their phones, and catching the occasional nap.

“I had those sofas in my living room when I moved into my new house, but they took up too much space, so I offered them to the College,” Cannon says. “I had no idea they would be such a big hit.” They came fully tested, however. “I did fall asleep on them many times,” she admits. 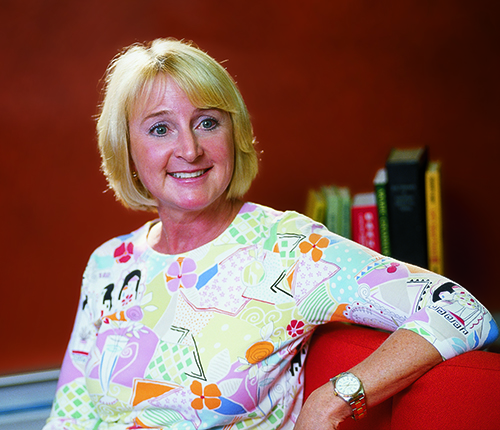 Years before she gave the sofas to Occidental, Cannon dreamed about completing her Oxy degree. “It was one of those ‘I wish I had …’ things,” she says. When she moved to Irvine from Greenwich, Conn., Cannon finally made her dream a reality. It was a long commute from her home, but worth it. “The back-to-school experience was transformative for me in many ways, but in particular in my relationship with Oxy. Once I came back to Oxy, I was so excited by what was going on. I became a real fan.”

In her 37 years at Oxy, professor of linguistics emerita Betchen Barber remembers just a handful of students who returned years later to finish their degrees. “I loved having Anne in class,” Barber says. “In a class that had a lot of freshmen, she really stood out. All her papers were right on. She had a work ethic that made the other students sit up and take notice, and the questions she asked would help them focus.”

After her year as a student, becoming a trustee gave her a new perspective on Oxy. “I became more aware of how the money is spent and the stewardship of the College. Since Jonathan came on board as president, we have had a really tight financial operation and nine consecutive years of balanced budgets, so I was comfortable with the way my annual gift would be spent, that it was really doing good things.”

In the basement of Thorne Hall, in a room that TeleFund callers affectionately refer to as the “Tiger Den,” Cannon dials up alumni to thank them for their support of Oxy. No gift, she says, is too small.

Cannon has been a regular contributor to the Oxy Fund since her first job as a staff accountant for Price Waterhouse taking home $650 a month after taxes. “I understood from the very beginning that I should give back to the College once I graduated—I learned it from my parents,” she says. “I knew I should give back because I had been given a gift—not only from my parents but from the people before me who gave to the College. That inspired my giving.”

That record and her insight into philanthropy made her a natural to serve as national co-chair of the Oxy Fund, a role she shares with Raymond Yen ’82. “From the beginning I have been interested in annual giving and focused not just on the amount of giving but also regular participation,” Cannon says. When more alumni give, it has an immediate impact on the College’s bottom line—and a positive effect on Oxy’s U.S. News ranking, she adds: “Participation rates matter.”

In addition to sizable annual gifts to the Oxy Fund, Cannon has made planned gifts to the College as well. The first was what is known as a charitable remainder trust to which she contributed stock. “The trust helped me diversify my portfolio and it generated more revenue than the stock dividend. It was a solid business decision,” she says.

Her most recent gift is an estate gift that represented one of the earliest major commitments to the College’s upcoming comprehensive campaign, whose goal is to build Oxy’s endowment and to support financial aid, faculty and academic programs, and the College’s capital needs. When realized, it is expected to become one of the largest gifts in College history.

“I always knew of the importance of the endowment—as a CPA, that’s second nature to me,” Cannon says. “But as a trustee I’ve learned how much Oxy does for its students despite the relatively modest size of the endowment. Right now, we’re doing a lot with a little. We’re fighting above our weight. And the campaign is all about growing the endowment and generating more resources for our students and faculty.”

Her confidence in the direction of Oxy is such that her gift will go into the endowment “and be used however the College needs it: scholarships, professors’ salaries, deferred maintenance, or whatever,” she says. “I just want to do my part to help ensure Oxy’s ability to educate future generations.”