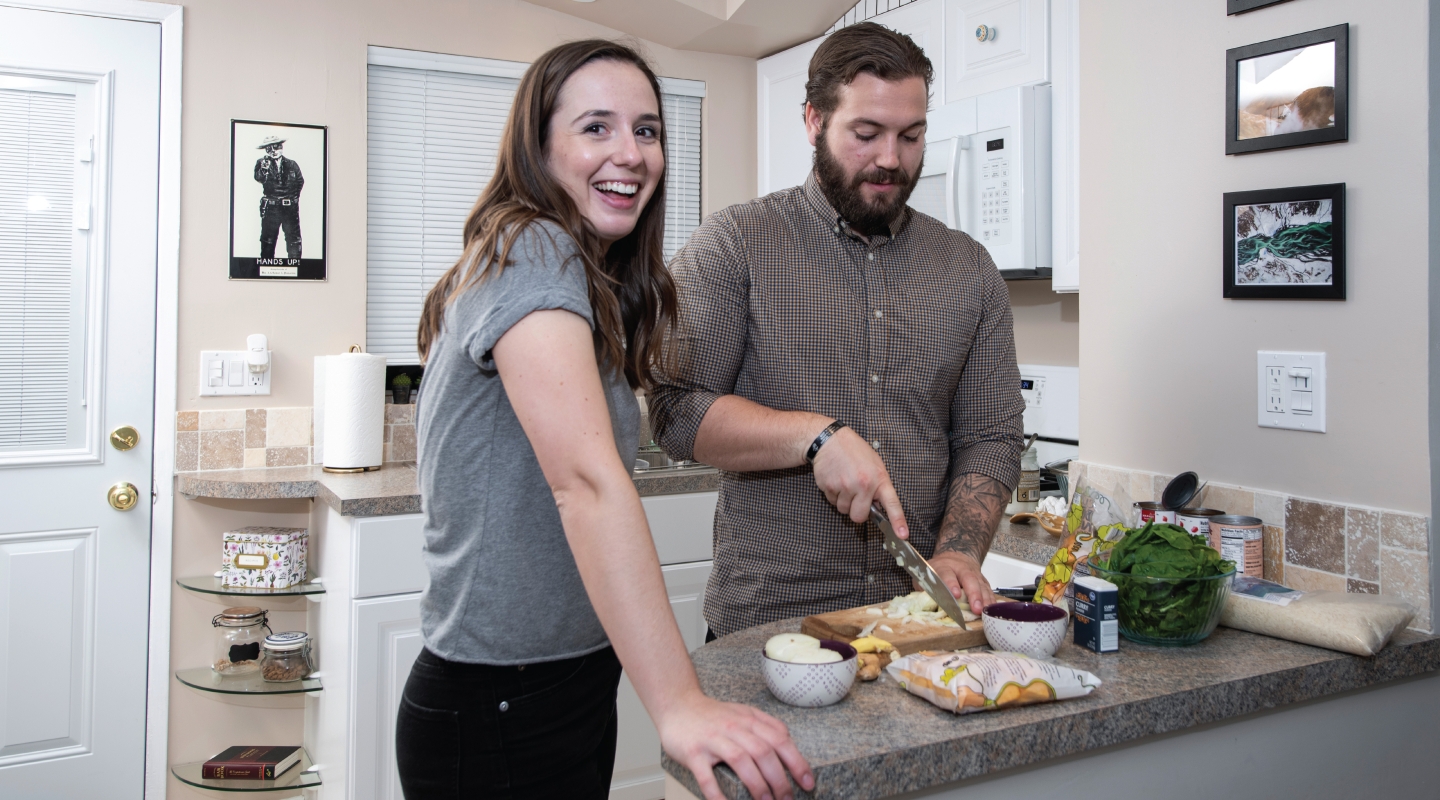 Coming out of the Marine Corps in 2016, Tyler Melchisky had no idea what he wanted to do next: Should he start working, or head to college at age 24? After moving from San Diego to Los Angeles with his girlfriend, Taylor VanEtten, Melchisky enrolled at Pasa­dena City College for a couple of exploratory years. When it was time to transfer, VanEtten suggested he apply to Occidental. Not only was Melchisky accepted but the couple—recently engaged—became the first to live in the College’s newly renovated veterans housing complex last February. 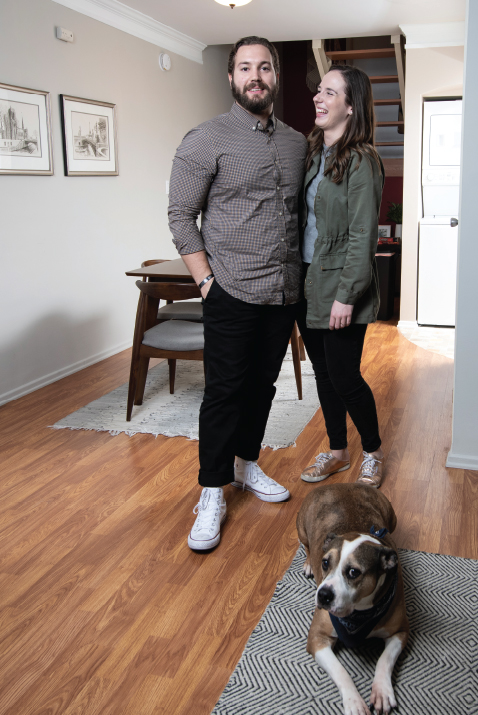 “Transitioning away from the service and having Occidental help you find your path outside of the military was really nice,” says the Oxy junior, who hopes to graduate in 2021. “I felt at home at Oxy because it’s such a small school—it’s been more like a family atmosphere.”

Reaffirming a long-standing commitment to supporting U.S. military veterans, Occidental had been looking for an opportunity to provide affordable, off-campus housing that would accommodate veterans’ unique needs. Through the generosity of The Ahmanson Foundation, in 2018 the College finalized the purchase of five structures on a sprawling, lushly landscaped property on Toland Way, about a mile west of campus. 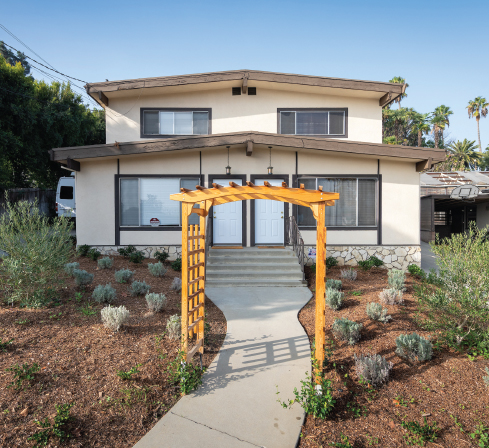 A duplex and a small house stand side-by-side, with a view of Toland Way Elementary across the street and the stately San Gabriel Mountains in the distance. As you climb the property’s upward slope, a brick path leads through jungle-like plants and exotic trees, and you encounter greenhouses and koi ponds and standalone tiled patios. The atmosphere is rather magical.

“We designed this housing to serve as a community,” explains Nathan Graeser, director of Occidental’s veterans programs. “We organize dinners together, hang out on the back porch, and we’re also planning some amazing events this year. Our goal is to build a sense of place for our veterans.”

For most vets coming out of the military, the GI Bill provides an allowance for college tuition and housing. Despite the high cost of housing in Los Angeles, Oxy takes only half of what the GI Bill allots, subsidizing students’ living expenses so they can focus on their rigorous education and not have to take a job on the side. 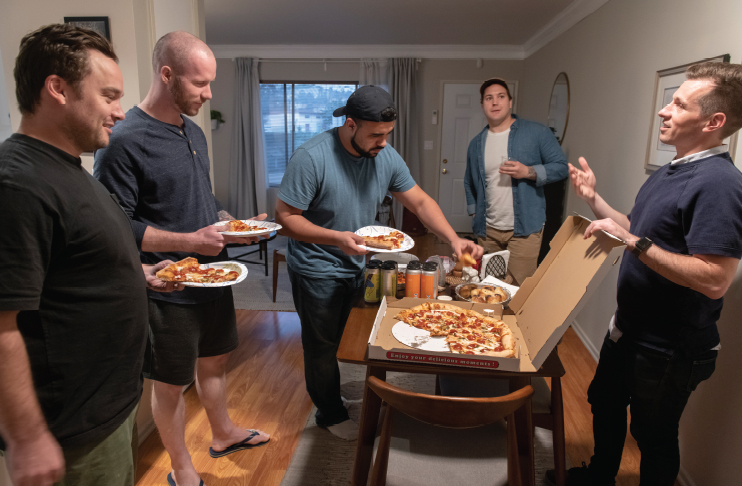 “We’re here to provide a truly affordable housing experience for veterans,” says Graeser, a licensed clinical social worker and military veteran who has counseled countless veterans and their families on dealing with the challenges of service and returning home.

The history of veterans housing at Oxy dates back to just after World War II, when a preponderance of returning soldiers, many of whom were married with small children, created a need for veteran-specific housing. Starting in 1947, functional family units (aka “the Boondocks”) were constructed on the west side of campus. 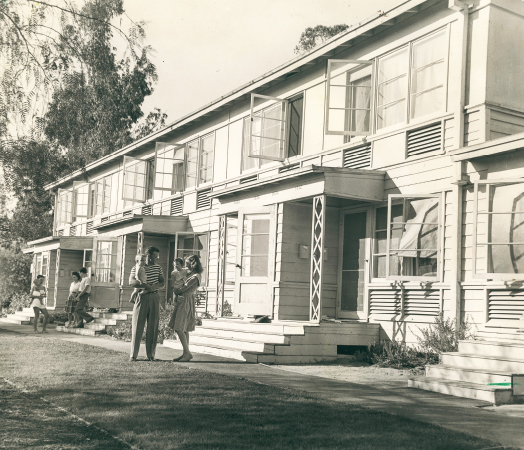 As the number of veterans attending Occidental declined, special housing was discontinued in the 1970s. Since 2010 the College has participated in the Department of Veterans Affairs’ Yellow Ribbon Program, which helps fund tuition expenses. Oxy is also one of 24 California colleges and universities that participate in the Ahmanson Veteran Scholarship Initiative, created by The Ahmanson Foundation in 2013.

Oxy formally launched its Veterans Program last year, with Graeser at the helm. (Woody Studenmund, the Laurence De Rycke Professor of Economics and father of Army Staff Sgt. Scott Studenmund—who was killed in a “friendly fire” incident in Afghanistan in 2014 —serves as faculty adviser to the group.)

Under the supervision of Samuelson Brothers—whose principals include Jack Samuelson ’46, a WWII veteran and Occidental trustee emeritus, and Samuelson’s son Reid ’72, a current trustee—renovations are just beginning for the property’s “big house,” which will provide four more bedroom-bathroom suites and downstairs communal space. Graeser’s tiny office sits on a knoll on the edge of the Toland Way property.

In the meantime, the community is growing and thriving. Four student veterans—ages 23 to 31—are living in the duplex, including Melchisky, who is working on a history major with a minor in urban and environmental policy. The vets decided to participate in a Spartan obstacle course race together this fall, and Melchisky and neighbor Jarad Angel ’21 (an economics major from Carlsbad) are taking an Oxy yoga class this semester.

Having Graeser as a liaison and being around other students who have lived through the military experience is a plus, Melchisky says. “It’s great to be able to make those connections and not feel lost. Being a little older, we’ve had different life experiences and we’ve been on our own for a while. It’s nice to be off-campus and able to step back a bit at times—I’m a student, but I also have these other priorities.”

Winter 2020From the QuadStudent Life