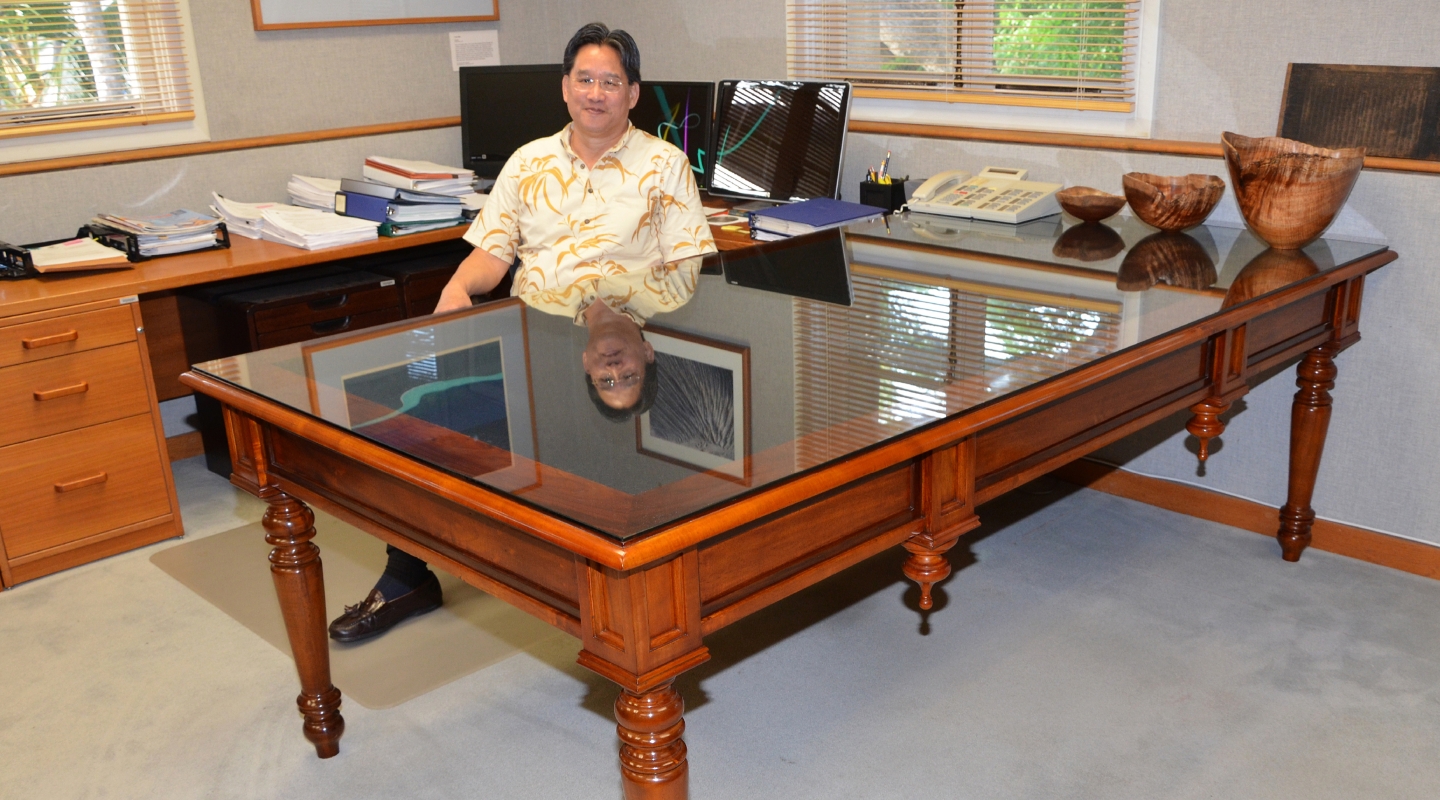 Looking back on his tenure as the nation’s first Chinese American state attorney general, David Louie ’73 offers an unvarnished account of the inner workings of government, politics, and the law

David Louie ’73 was 32 years into his career as a civil trial lawyer in private practice in 2010, when he was nominated by Hawai‘i’s newly elected governor, Neil Abercrombie, to be the state’s attorney general. “It was the equivalent of taking a high-speed elevator to the penthouse executive floor,” Louie writes. “I was about to run the largest law firm in Hawai‘i, with 185 attorneys, several hundred staff, a $70 million annual budget, and the responsibility to provide legal counsel to everyone who worked for the state.” 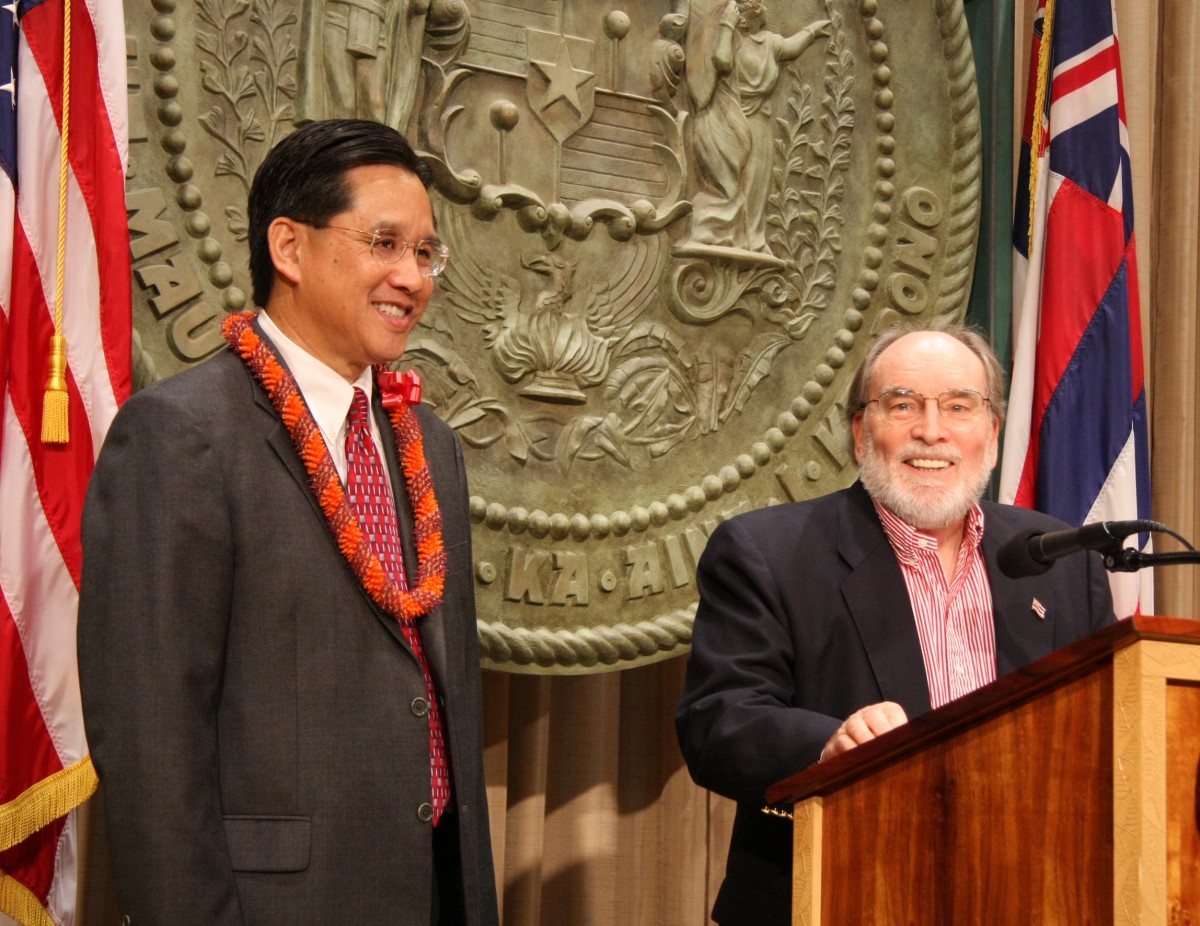 From the Desk of the Attorney General—Louie’s newly published memoir of his experiences as the country’s first Chinese American state attorney general—takes its name from the historic koa wood desk in his office in the state capitol. But when Louie stepped in his office, the desk was in considerable disrepair, as he writes in the preface to his memoir:

“Eight feet long and four feet across, it had an unusual design of intricate woodwork and brass hardware that said old school. … It was slightly warped, the brass plates tarnished, portions of the desk missing or replaced with nontraditional materials, and not with care. It was finished in a dark rosewood color dulled with age, but there were places where the reddish paint had been chipped away, revealing the golden brown hues of koa, a hardwood endemic to Hawai‘i and prized for its beauty.” 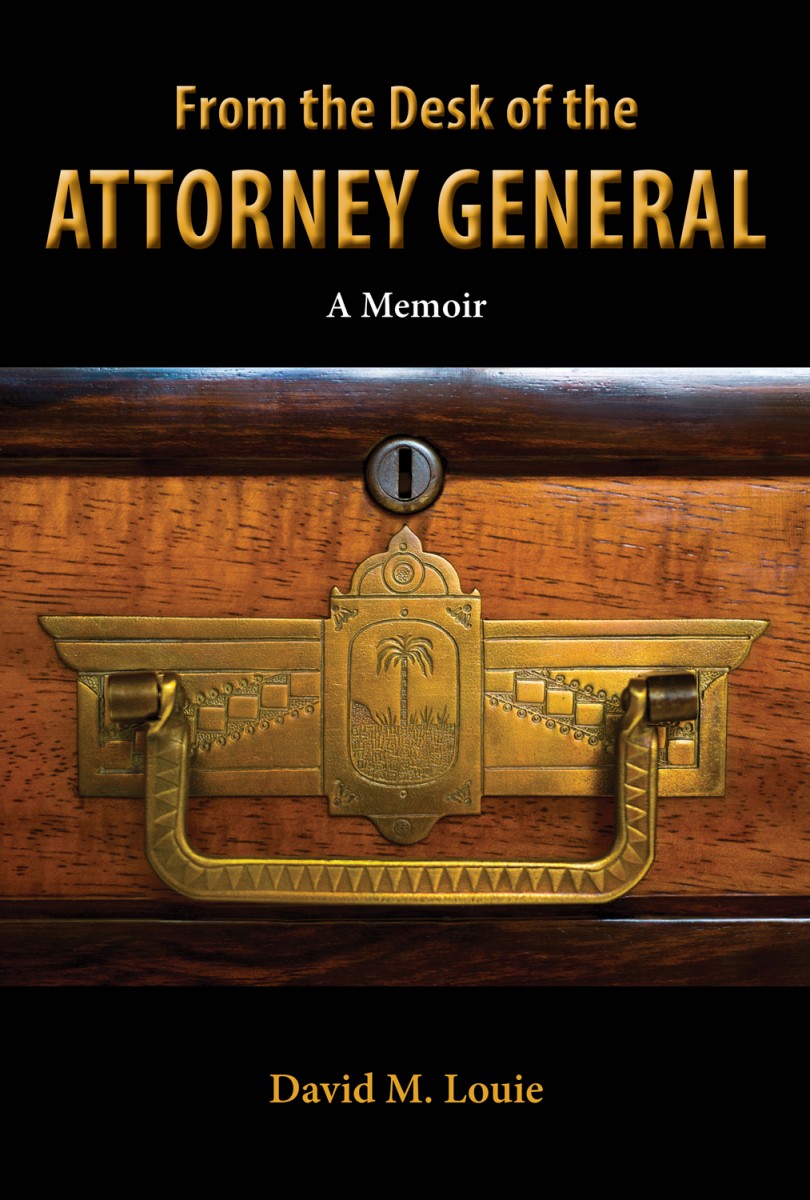 The desk gave Louie a front-row seat for viewing—and shaping—the inner workings of government. In From the Desk of the Attorney General (Legacy Isle Publishing), Louie recalls the landmark cases of his four years in office. “Legalizing same-sex marriage, settling 30-year-old claims by Native Hawaiians as well as defending Hawaiian rights at the U.S. Supreme Court, enforcing criminal laws, protecting consumers, and protecting the environment were just some of the wide-ranging issues we tackled on my watch,” he writes. (There was also the matter of President Barack Obama ’83’s birth certificate, which he touches on in the book.) “It certainly changed the way I thought about government, politics, and the law.”

“Restoring the desk paralleled my own journey of discovery and education about our government,” writes Louie, who lives in Honolulu with his wife, Johanna. (Side note: He also made the wooden koa bowls that adorn his desk in the above photo.) “As I watched the desk being transformed, I also changed my perspective of government.”

As attorney general, “I got to sit in the high councils of the Hawai‘i state government,” notes Louie, who undertook the memoir as a means of making sense of the experience—“to encapsulate and summarize it and put it into a meaningful logical order. The governor let me very graciously into the inner circle. I got a seat at the table, and I learned a lot of things that are not well known. I really thought it was the best job ever.”

On occasion, Louie writes in his memoir, “I’ve reflected (sometimes in amazement) on how I got to where I am.” His grandfather, Louis Loy, migrated to the United States in 1882 from a small village in rural southern China a few months before the passage of the Chinese Exclusion Act by the U.S. Congress, which shut the country’s door to Chinese immigrants for more than 60 years. His father, Paul, was the first in his family to graduate from college. After attending Harvard Divinity School, he became a Presbyterian minister and later joined the staff of the Los Angeles County Human Relations Commission, working with Asian American communities.

David Louie grew up in Sylmar and followed in brother Stephen ’71’s footsteps in enrolling at Oxy. “I started out as a math major but I ended up in sociology,” he says. During his junior year, working closely with Sociology Professor Claire Graham, Louie received an international fellowship for nine months of independent study and research in Hong Kong. 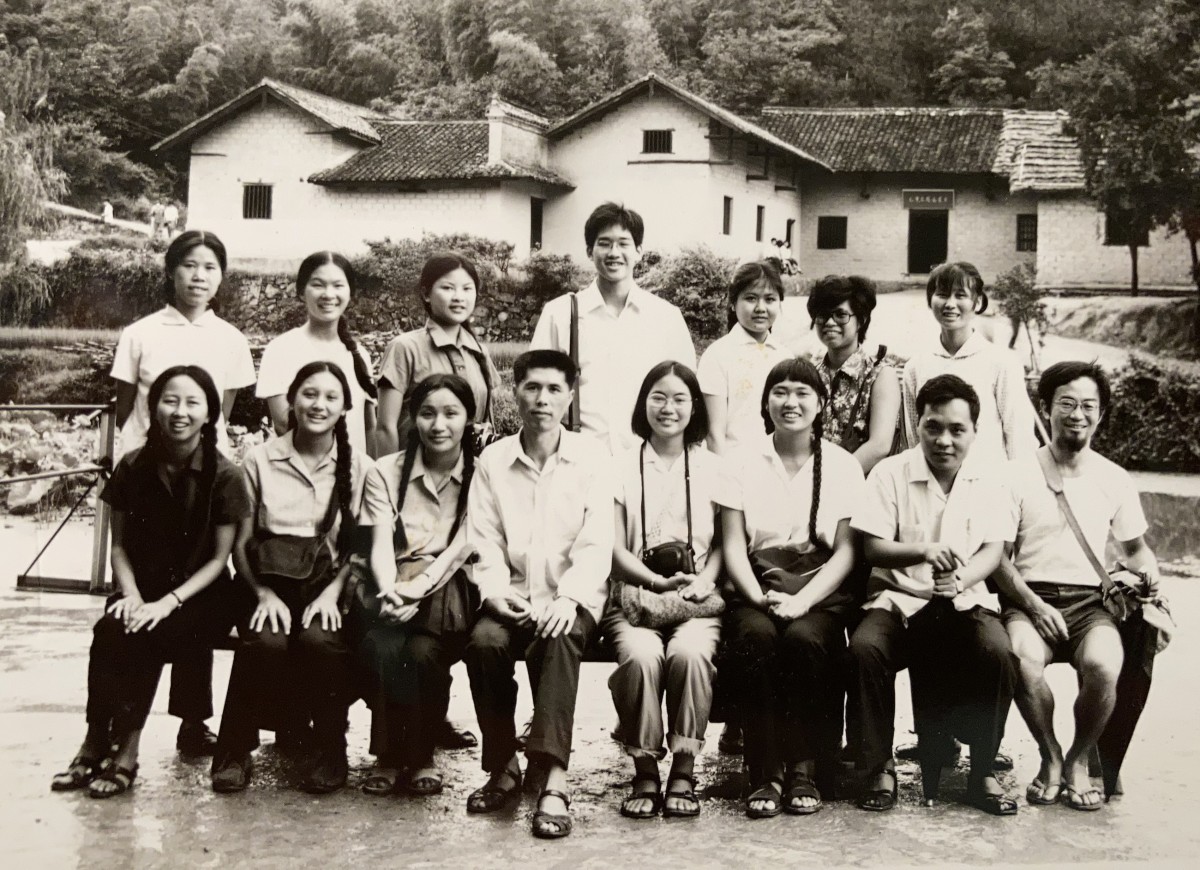 “I became increasingly interested in learning about my heritage and identity and began studying more about Asia,” he writes in his memoir. “I had never consciously put a name on or thought about my experience as a person of color growing up in white communities, since it was just what I experienced. But this contact with the Asian American movement made me so much more conscious of my identity as a Chinese American, the whole issue of being a person of color, and my understanding of the civil rights movement and the quest for social justice.”

While he was in Hong Kong, Louie became friends with a group of Chinese American students who invited him to join them on a trip to the People’s Republic of China, following on the heels of President Nixon’s “ping-pong diplomacy.” "We toured China for two months, courtesy of the Chinese government, then I wrote my thesis about that.” Louie recalls.

After he completed his law degree from Berkeley, “Conventional wisdom was, you’ve got to go to a big law firm and learn the craft from people who really know how to practice it,” Louie says. “And that’s not true at all. There have been many terrific lawyers who have been community lawyers, who have been solo practitioners who have found their way and just done great things. But that was the wisdom I followed at the time.”

Consequently, Louie went to work at what would become Case & Lynch, one of the oldest law firms in Honolulu, and then formed his own firm in 1988. He was president of the Hawai‘i State Bar Association in 2001, and served on multiple commissions and government boards over the years, but he never gave serious thought to making a career of public service. “I was kind of fat, dumb, and happy doing what I was doing,” he says.

When Abercrombie’s campaign chair and a longtime friend of Louie’s, Bill Kaneko, first approached him about taking the job of attorney general, “I initially turned it down,” he adds. Ultimately, he saw the position as “an extraordinary opportunity to contribute as well as learn. What I found was the public service and working with others to improve our communities is tremendously rewarding and educational.”

After taking the job, the best advice Louie says he got came from Charles Breyer, senior U.S. District judge for the Northern District of California. “We had dinner, and Chuck told me this story about this legendary lawyer in California. I forget the guy's name. It was somebody like a Clark Clifford—a confidant to Gov. Pat Brown and consigliere to the muckety-mucks. He was a fixer in the classic sense—very smart and very accomplished. 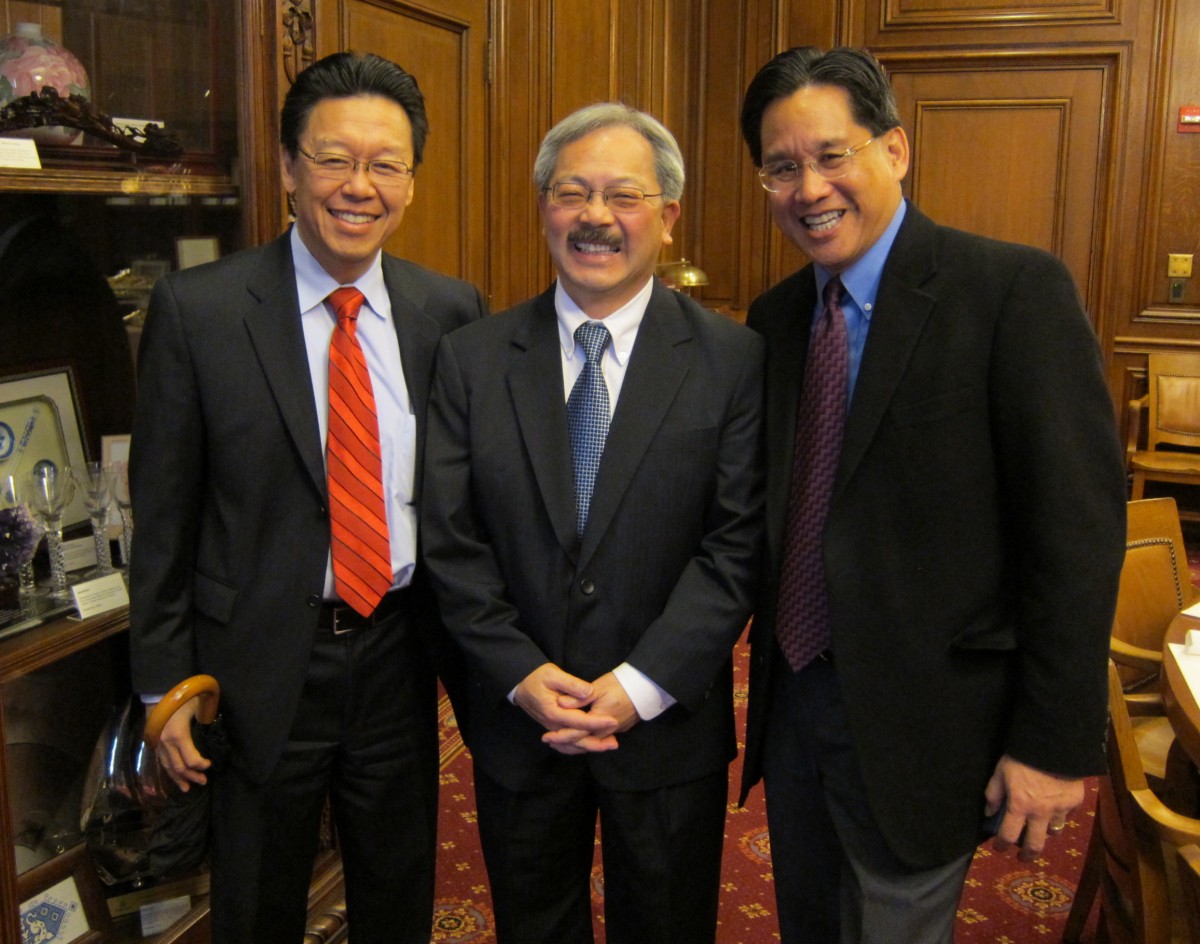 “And when people would ask him for a favor, he would write it down in a little notepad that he would carry around with him. Then his objective was to do something as soon as possible, because if you pick up the phone and call somebody and actually get something done, this person will think you are a magician and will have a huge debt of gratitude to you. But if you wait two weeks, or a month, the curve of gratitude goes way down.” Ever since, he says, “I try to do things as soon as I can.”

After Abercrombie lost the Democratic primary for governor in August 2014, “it was fairly clear that I would have to move on,” Louie writes. Even though he had only committed to a single term of service, he had grown to like the job. After the general election, he “naively held out some small hope” that Governor-elect David Ige, a fellow Democrat, might be interested in keeping him on, but he quickly found out otherwise.

Making the transition back to private practice “was very daunting and difficult,” Louie admits. When he took the attorney general job, he had to resign all of his clients in short order. “And when the merry-go-round stopped, it was like, ‘OK, get off.’ And I thought, ‘What now? I have no clients, I could go back to my old law firm, but let’s look around.’

“Being a lawyer is like being a small shopkeeper, because all clients are personal in many ways,” he adds. “Many times, people at a certain level hire a lawyer for your skillset—they don’t care what your law firm is. I was still young enough that I couldn't retire, and I didn't really feel like retiring anyway.” Ultimately, Louie became a senior partner with Kobayashi Sugita & Goda in Honolulu. “Luckily, I had enough friends and acquaintances that I've garnered my fair share of work and I got going again. But that first year was worrisome.”

More than seven years after returning to private practice, Louie maintains a proprietary interest in the office of the attorney general, “making sure that they're doing fine, making sure that they’re doing their mission,” he says. “I'm primarily a litigator but because I do some lobbying work”—for a client list that includes Meta and Geico—“I need to keep tabs on what's going on in government and who the players are.”

A little over two years ago, Louie found himself looking back on his stint as attorney general and floated the idea of committing his memories to print. Noting the paucity of memoirs by attorneys general overall (“I think there are about five”), he hopes that his book will educate readers a little about how government works. “When writing a memoir, you're trying to make sense of the experience, so that was part of it, too—for my own purposes, just to encapsulate and summarize it and put it into a meaningful logical order.”

After Louie turned in the manuscript, “My publisher said to me, ‘Your book would sell better if you have some kiss and tell,’ he recalls with a laugh. “But I'm still a practicing attorney and I lobby up at the legislature. I've learned in my career that burning bridges is not a great way to go. I also learned that you should be nice to people on the way up, and hopefully they’ll be nice to you on the way down."