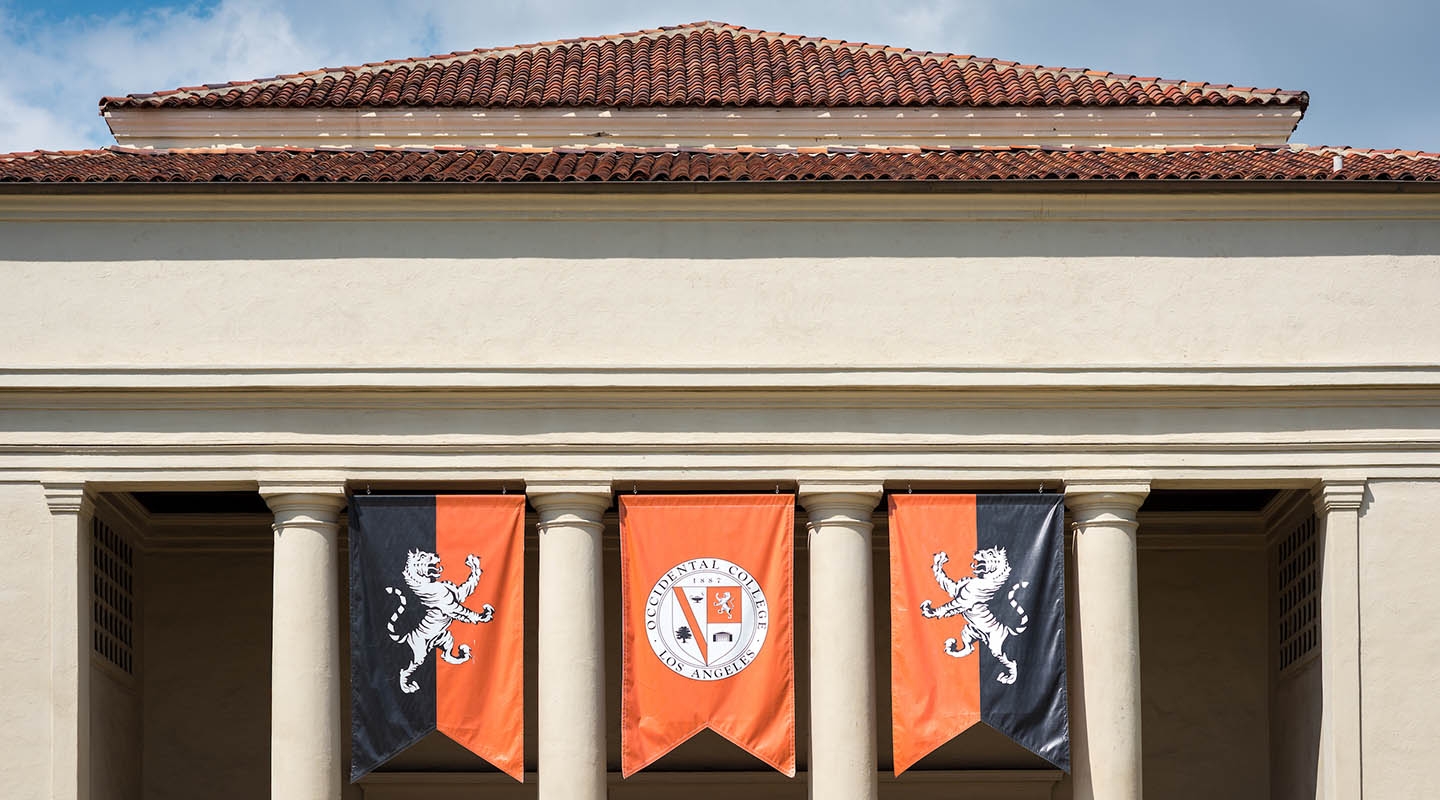 A professional football player, a socially responsible entrepreneur and a set designer/local historian are among this year’s recipients of the Alumni Seal Award, which will be presented by the Occidental College Alumni Board of Governors during Reunion Weekend, June 21–23.

One of the greatest football players to ever lace up cleats at Oxy, Vance played for six seasons with the Los Angeles Raiders and went on to found Mueller’s Elite Athletic Training Academy. Last year, Vance led the Football Action Team, a group of alumni that spearheaded the effort to raise over $1 million to save the football program and support Oxy Athletics. Vance met his wife Lissa (Palla) Mueller ’86 while at Oxy. They have three children, Aislynn, Timery and Shay ’16.

Andrew is co-founder of Bombas Socks, a $47 million social benefit company that donates a pair of socks to homeless shelters for every pair sold. Bombas is one of the most successful businesses to have received an investment on Shark Tank. Andrew has provided internships to Oxy students at the company and has also been a generous supporter of the water polo program and Glee Club.

Lindy West is a contributing opinion writer for The New York Times and the author of the bestselling memoir Shrill: Notes from a Loud Woman as well as the upcoming essay collection The Witches Are Coming. In 2018 she adapted Shrill as a half-hour comedy TV show, which is set to air on Hulu later this year. Her work has also appeared in This American Life, The Guardian, Cosmopolitan, GQ, Vulture, Jezebel, The Stranger. She is the founder of I Believe You, It's Not Your Fault, an advice blog for teens and is an activist for women's reproductive rights.

Jose Silva '84
Service to the College

Jose Francisco Silva’s legacy of service continues to inspire the Oxy community. After receiving degrees in Spanish literature and economics, Jose spent 25 years at Raytheon where he was known for his professional success and his leadership of community service and diversity programs. He started mentoring programs to inspire under-served youth to pursue STEM careers and co-founded Raytheon’s national Hispanic Organization for Leadership and Advancement. He also founded Occidental’s Latino Alumni Association (OCLAA) and served on the Alumni Board of Governors. In 2008, Jose was killed in a tragic accident. Following his passing, Oxy’s Latino Scholarship Fund was renamed the Jose Silva Memorial Scholarship to commemorate his legacy.

Kyle Ballard '04
Service to the College

When Kyle is not fighting human trafficking in his role as a senior coordinator at the U.S. Department of State, he has given back to his alma mater with an inspiring level of volunteerism. He has been a Distinguished Oxy Alumni Speaker, an active member of ViSTA (Volunteers in Service of Tiger Admission), and has been actively involved with the Kahane United Nations Program and Diplomacy & World Affairs Department programming.

Eric Warren '69
Service to the Community

Eric was born and raised in Eagle Rock, attended Eagle Rock High School before coming to Occidental, and still lives here today. After a long career as a set designer for film and theater, Eric has dedicated his retirement years to chronicling and preserving the rich history of Eagle Rock and Northeast Los Angeles. He is currently president of the Eagle Rock Valley Historical Society and has authored two volumes of pictorial history of the area. At Occidental, Eric serves on the Alumni Board of Governors. He has served on his reunion committees, mentored students and is a member of the Ben Culley Society.

In 2018, Adrian was appointed by Governor Jerry Brown to serve on the California Cannabis Control Appeals Panel, where she works on complex legal issues concerning the criminal justice system. Previously, she served as deputy legal affairs secretary and, prior to serving in the governor’s administration, deputy city attorney for tSacramento. Adrian serves on the board of directors for the California ChangeLawyers. She is the past president of the Wiley W. Manuel Bar Association and is also a California State Assembly Delegate.

Since 1965, the Occidental College Alumni Association has paid tribute to inspiring alumni who represent the values and spirit at the core of the Oxy experience. Seal Awards are given annually in the categories of service to the community, professional achievement, service to the College, young alumni achievement, emeriti faculty and alumna/us of the year.