Triumph of the Shrill | Occidental College 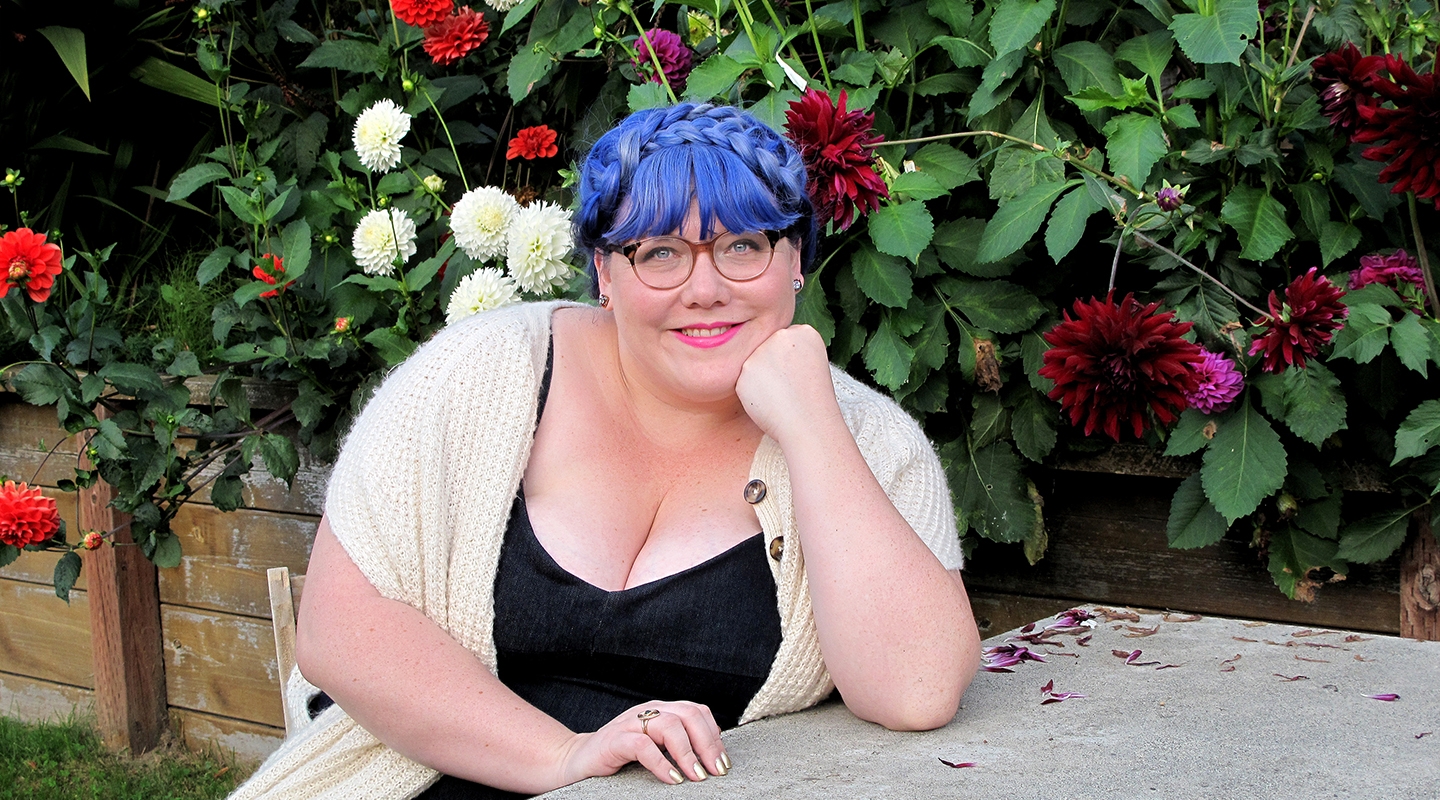 Triumph of the Shrill

When ad man and musician Paul West died in December 2011 at age 76 from prostate cancer, he was remembered by Seattle Times jazz critic Paul de Barros as "an ebullient pianist, singer, and humorist who entertained several generations on Seattle's lounge scene from the 1950s forward." He was also the father of three, including daughter Lindy West '04, to whom he wrote poems on the back of receipts and taught the virtues of empathy, boldness, and kindness.

More than 18 months after his passing, on a midsummer afternoon in 2013, West received a Twitter message from someone calling himself "Paul West Donezo," complete with a profile photo of her dad playing his favorite instrument. The thumbnail bio read "embarrassed father of an idiot."

In recounting the incident on NPR's "This American Life," "I don't remember what [the message] said exactly, and I didn't keep a copy for my scrapbook," West said. "But it was mean."

Her "father," it turns out, was a troll, someone who posts hateful and abusive diatribes online. In the age of social media, trolls have turned the Internet "into a cesspool of aggression and violence," Time bemoaned in its August 29 cover story in which West was quoted. Remarkably, the troll ultimately apologized, blaming his behavior on self-loathing, and made a small donation in Paul West's memory to Seattle Cancer Care Alliance, where her dad had been treated. ("I guess he found that out in his research, too," West noted in the NPR piece.)

"Sometimes I worry that we're going to have to scrap it and move on from social media," says West, who just as quickly isn't wholly convinced of her reservations. "It's also a really incredible tool for people who historically have not been heard. You can tweet directly at your local representative. You can upload video of police beating someone. There are some really democratizing powers that social media has. It's really powerful and important," she adds, "but also really dangerous and scary."

West would know. A contributing writer to GQ, Jezebel, and The Guardian, West remonstrates against online misogyny, racism, and hate. In her first column for The Guardian following the presidential election, West wrote: "If you consider yourself a good progressive, but you spent the past eight years parroting the troll party line and tittering at the silly activists—mocking us, baiting us, treating us like children, eroding our credibility—and now you're pointing at black people, Muslims, rape victims, immigrants, and everyone else who is petrified for their lives under a Trump regime, and insisting that we brought this on ourselves by fighting too hard, then screw you. You didn't fight at all. And you will suffer the least."

West's visibility—she has more than 90,000 followers on Twitter, with more than 22,000 tweets to her name—comes at a price. It puts her in the crosshairs of trolls, whom she's not afraid to poke with her own hot stick. It's something West describes in her recently published memoir, Shrill: Notes From a Loud Woman (Hachette Books).

Trolling, she says, "is the death rattle of supremacy," something the social justice-inclined West is more than happy to help upend. She engages Twitter trolls with all due deliberation: "I try to be sparing with my engagement, but if they give me a really good opening, I'm going to take it. I don't want them to feel this is a consequence-free hobby.

"A lot of people benefit tremendously from historical hierarchies and the ways that we've traditionally ordered things," she adds. "It's beneficial for a lot of men to live in a society that teaches women to be subservient and compliant, and beneficial for white people to live in a system that gives them preferential treatment over black people. Trolling is a direct response to progress, to some of these threats to the status quo."

West's "strength and bravery are second only to her genius and wit," says Lisa Wade, associate professor of sociology at Oxy and author of American Hookup: The New Culture of Sex on Campus, a treatise exploring everything from brain development to gender inequality (to be published by W.W. Norton in January).

"Lindy West is a testament to Occidental's tradition of encouraging students to make a mark on the world and giving them the tools with which to do so," Wade adds. "She has been fearless. Whereas many high-profile thinkers cultivate a group of like-minded followers, Lindy has taken her battles to the front lines."

West's outspokenness comes as a surprise to those who know her, and even to West herself. Raised in Seattle, she grew up shy and "fat" (a topic she gives unstinting due in Shrill) and not entirely sure of her place in the world. West enrolled at Oxy for its size and location, a quick two-hour flight from her Pacific Northwest roots.

"It's always a little bit startling to me when I engage with the version of Lindy that people know now," says Charlotte Lange MacVane '04, who met West at the end of their freshman year, when both sang in the Oxy chorus.

They were roommates the following year, when West began to study comedy with an academic zeal. She attended comedy clubs in Pasadena and Los Angeles, and she was a devotee of Howard Stern (until his frequently misogynistic rants ultimately drove her away). During their Oxy days, the friends relaxed by driving around wealthy neighborhoods in Pasadena and Los Angeles, "gawking" at homes while listening to "Loveline," the Drew Pinsky-hosted radio program that dispensed comedy-leavened relationship advice.

"The thing that has always defined Lindy is she's deeply, sort of destructively funny," says MacVane, general counsel for a Houston software firm. "She's so funny that it's hard to keep yourself together when you're around her. When we were in college, so much of what we did was consume and understand comedy. Lindy was really responsible for the development of my own sense of humor in a lot of ways."

West, who lives in Seattle with her husband (musician, writer, and comedian Ahamefule J. Oluo) and two stepdaughters, has contemplated getting a dog for protection. Trolls have posted her phone number online, and "There are some times when I've said to her, 'You need to call the FBI,'" MacVane says. "I feel really nervous for her."

West, an English major, graduated from Oxy with no clear career plans. She'd always wanted to be a writer, but she lacked confidence. She took work with a San Fernando Valley parenting magazine ("the experience was terrible in most ways") before she landed a data-entry job at Seattle's alternative weekly, The Stranger. A charitable editor assigned her a theater review, which drew plaudits. In what she describes as "a stumbling, weird course," West became the weekly's film editor.

In February 2011, West butted sensibilities with The Stranger's Dan Savage, an LGBT activist and nationally syndicated sex-advice columnist. In response to an Iowa Republican delegate's claim that homosexual behavior cuts life expectancy, and gay people shouldn't have the right to marry, Savage opined, "Why stop with gay people? Iowa should ban fat marriage. … The odds that the skinny spouse will ultimately be seduced into the risky obese lifestyle are simply too great and the potential health consequences too severe."

Savage's backhanded polemic was only his latest dig against fat people ("In the mid-to-late aughts Dan was on something of an 'obesity epidemic' kick," West writes in Shrill), but it proved both catalytic and cathartic for West. In response, she posted a photo of herself ("28 years old, female, 5'9", 263 lbs.") and wrote her own blog entry, "Hello, I Am Fat," rebutting Savage:

"That was really the moment where my style and philosophy of writing changed," West says. "I was declaring, 'This is who I am. I'm not going to eat shit and say thank you anymore.' The response that I got was so profound. I heard from people who said, 'I feel the same way and I've always been afraid to speak up.' Some people said it had a major impact on their mental health. There's just nothing more validating than that, and it also starts to feel like a responsibility."

West is setting her sights beyond the Twittersphere, working with an agent in hopes of adapting her book to television. "As I get older, I'm moving more and more off the Internet," she says. "When people are insulting you all day, every day it can be really easy to start believing it a little bit. It's important to decompress and get out of that head space."

Until then, she will continue to be a voice for her fellow millennials, speaking the truth as she sees it, and waging war on trolls as she sees fit. "You know what really works once in a while?" she asks. "If you're kind to them, like relentlessly kind. Sometimes I will engage and say nice things over and over and over until they break. I try to have a certain amount of empathy for sad people on the Internet."

Adds Wade: "It's a sickening example of what has so often been true: The oppressed and beaten down have to be the bigger person. Not everyone has it in them to do that kind of thing, but Lindy is one of them."