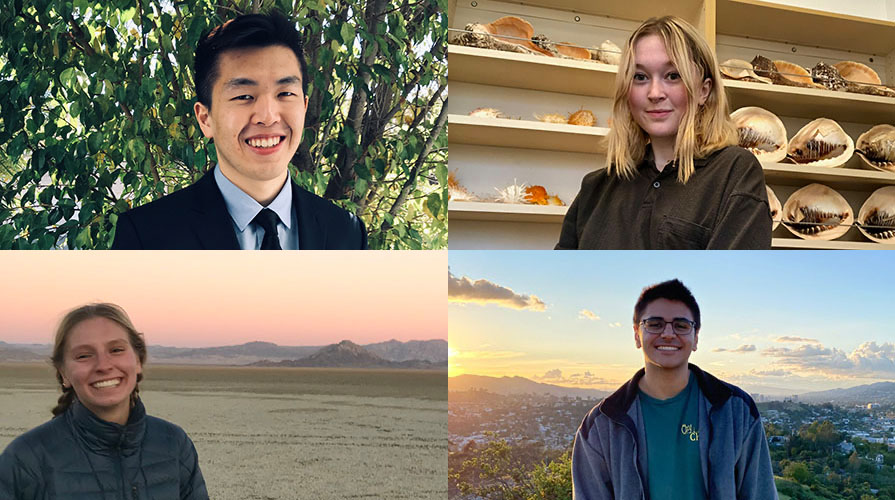 Four Occidental College students collaborating with faculty mentors in the fields of biology, geology, chemistry and biochemistry have been named 2021-22 Science Scholars and presented with research grants funded by the Kenneth T. and Eileen L. Norris and Fletcher Jones foundations.

Each Science Scholar receives $15,000 for research conducted spring term junior year, summer research between junior/senior years, and all of senior year. Eachscholar will present their work at a professional conference as well as at Oxy's summer 2021 Undergraduate Research Conference.

Working with Assistant Professor of Geology Darren Larsen, Muscott will pursue a project entitled “Reconstructing glacial fluctuations and late Holocene hydroclimate variability in the western U.S. from alpine lake sediments,” an extension of the work she did in summer 2020 analyzing sediments from Lake Solitude, a non-glacial lake in Wyoming’s Teton Mountain Range.

In her current project, she will analyze sediments from four lakes in the Teton Range including Lake Solitude, Surprise Lake, Mica Lake, and Delta Lake to observe glacial fluctuations and hydroclimate variability during the late Holocene epoch—the period covering the last 11,700 years. “The goal of my work as a Science Scholar is to improve our understanding of ongoing climate changes and the resulting environmental impacts for sensitive alpine ecosystems in the western United States,” Muscott says.

“I am excited to work on a project from start to finish,” she adds. “I am most looking forward to participating in field work, including a 10-day lake coring expedition in the Tetons, expanding the results of my 2020 summer research project, and learning geochemical analyses I have yet to perform!”

Shirley is working with Assistant Professor of Biology Amber Stubler on a project entitled “Gastropods Utilizing the Cosman Shell Collection,” a study of ocean acidification on marine gastropods, or sea snails, that she began last year using Oxy’s Cosman Shell Collection, remarkable not only for its size and international scope but for its detailed documentation.

“The significant specimen numbers—about 117,000—and timespan of collection will allow for a broad survey of the negative effects of and organismal adaptations to ocean acidification caused by climate change, as well as the best practices and methodologies for using museum shell collections to study ocean acidification’s effects,” Shirley says. “The Science Scholar Program stood out to me as an incredible opportunity to provide funding for my project, to allow me to support myself financially through the rest of my undergraduate career, and to highlight the importance of this research to a wider audience.”

Hino’s research project, on which he is working with Associate Professor of Biology Cheryl Okumura, is entitled “Investigating the Transcriptomic Landscape of Nafcillin-Mediated Sensitization to Methicillin-Resistant Staphylococcus aureus.”

“The development of new antimicrobials and antibiotics is not likely a sustainable solution to the drug and antibiotic resistance problem,” Hino explains. “My project involves using computational methods to study the bacteria Staphylococcus aureus (MRSA) genome and working with mutant bacteria to study a specific antibiotic sensitization mechanism that will contribute to future research on developing targeted therapies for antibiotic resistant organisms.”

“I was drawn to Science Scholars because I want to eventually share these findings with the rest of the world and hopefully contribute to the medical community in a meaningful way,” he says. “Science Scholars felt like a step in the right direction towards that goal and a great opportunity to dive deeper into the research experience. I believe the program will allow me to grow as a researcher and will help propel me towards a career of purpose and service of others.”

Shamskhou, together with Associate Professor of Chemistry Jeffrey Cannon, is working on a project entitled “Intermolecular Additions of Ketyl Radicals Produced via Photoredox Catalysis” that depends on both remote computational chemistry as well as traditional organic chemistry lab work.

The two are working to discover new chemical reactions that form bonds between carbon atoms—specifically reactions that use visible light so that we can use abundant energy sources as a way of replacing reactions that have larger, more toxic waste streams.

“When I first found out about the Science Scholars program, I saw it as a way to build upon my personal foundation in research thus far,” Shamskhou says. “Having the privilege to further engage in research through activities such as presenting at national conferences will help me in my journey to becoming a better scientist as well as assisting me in my prospective career path.”