Alumni Dish on Hollywood, Tech Start-ups and Wall Street After the Bust 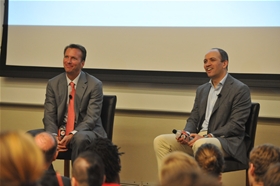 A frisson of excitement rippled through the packed room at Mosher Hall yesterday when Octavio Herrera '98 gave this suggestion: Occidental College should offer a computer science degree.

While the mission of a liberal arts college such as Oxy is to educate the whole person, Oxy teaches everything except practical and technical skills, he argued. Sitting next to him, Zaryn Dentzel '05 agreed, adding, "Oxy does a good job on the theoretical side, but people need to have pragmatic skills too, like basic programming and knowing their way around Excel."

Both are successful digital entrepreneurs. Dentzel is founder of Tuenti, Spain's most popular social media site, and Herrera co-founded three successful technology companies, including anti-piracy venture MediaDefender. Their panel, "Entrepreneurship, Technology, and Internet Start-ups," was one of three such events featuring notable alumni to celebrate Founders Day and kick off Occidental's 125th anniversary.

The computer science proposal was in line with the Oxy grads' innovative way of thinking. As a young college graduate with a degree in physics, Herrera landed a computer programming job at Raytheon, one of the nation's largest defense electronics companies. It was a good gig. But it wasn't for him.

So he and another programmer started MediaDefender, an anti-piracy software company. After a slow start, the company took off, and they sold it five years later for $43 million.

"We didn't want to be small pieces of this huge machine," Herrera said. "We wanted to be somewhere creative and do our own thing."

Dentzel encouraged students to participate in Associated Students of Occidental College, Oxy's U.N. internship program, and to apply for Richter and other research scholarships, saying that he learned more outside of the classroom than in it. And he gave advice to the would-be entrepreneurs in the packed room.

"Don't be afraid to fail," said Dentzel, who traveled from Madrid to speak at the panel. "Successful people have many failures. But they learn from them and move on. Failure is just the other side of success."

Entrepreneurs need focus, action, persistence and perspective, they agreed. And confidence is key. After MediaDefender, Herrera and his business partner led Jirbo Inc., one of the early leaders in social gaming, and sold that for profit. They are now on their third business venture, technology and investment company AlphaGenius.

"Believe in yourself and in your idea," Herrera told a student who wondered how to get funding for a start-up. "Never be embarrassed to ask for money if you believe in your project."

Another panel discussion, on the changing nature of Hollywood, featured movie producer Todd Garner '88 (Jack and Jill, Pearl Harbor, Paul Blart: Mall Cop). An economics major, he went back and forth between working in film and finance before landing a job as the accountant for "The Arsenio Hall Show."

"Once I stepped onto that Paramount lot, I knew I never wanted to leave," Garner said.

He eventually worked his way up to president of Walt Disney Pictures, left to help form Revolution Pictures, and then created his own production company, Broken Road. He has produced 11 films for Broken Road thus far, including last year's Adam Sandler movie, Jack and Jill, "which swept the Razzies!" he half-joked.

Specializing in comedies, "I love making people laugh," he said. And if he can make just one person forget about their troubles for a half-hour or so, "I'm happy."

When asked what advice he would give to Oxy students who want to break into the film business, he said, "I'd become an art history and English major. You don't need to go to film school. Get a liberal arts education. Read. Study art. And friggin travel. Period. Learn about yourself, learn about life. You don't need to do anything else."

Garner added: "If you're a good writer, Hollywood will find you. The good news is: Talent will always find a way to be successful."

Before a standing-room-only crowd of students, alumni, and staff, they held forth on what it's like to work in the financial sector now and gave their take on the world's economic pulse, the Buffett Rule, and a flat tax rate.

Both McKinnon and Shambayati spoke of Sept. 15, 2008, as a watershed moment. A nadir for the financial world, that was the day the fast-sinking markets tanked and when investment giant Lehman Brothers filed for bankruptcy. The reverberations were felt worldwide.

"People learned that when Lehman was allowed to fail, the system literally seized up," McKinnon said. "We got a firsthand glimpse of how interconnected the system was. The scare that engendered has lasted."

Shambayati, who worked for Lehman at the time and has a Ph.D in chemistry, reflected on the Wall Street collapse, which was triggered in part by an interplay of valuation and liquidity problems in the banking system. What went up came down hard, and provisions now exist to safeguard against another collapse, but they don't address the root cause of the financial collapse.

"Much like in medicine, you have to know the cause of the disease to cure the patient," he said. "The regulators decided that leverage could increase, and it was in 2008 that leverage started going up."

Both McKinnon and Shambayati approve of the Buffett Rule, a new tax proposal by President Barack Obama '83 that would federally tax people who make more than $1 million a year at least 30 percent. However, they also said that the proposal seems to be driven more by politics than fiscal need.

"The more complicated the taxes, the less people pay," Shambayati said. "There's direct evidence that if you want to collect more taxes, go to a flat tax."

McKinnon agreed, adding another reason why he supports the Buffett Rule. "The inequality in this country is cancerous. The symbolism of the Buffett Rule is very important, and I think we should go to Clinton-era tax rates," he said. "We can't kill the American dream."