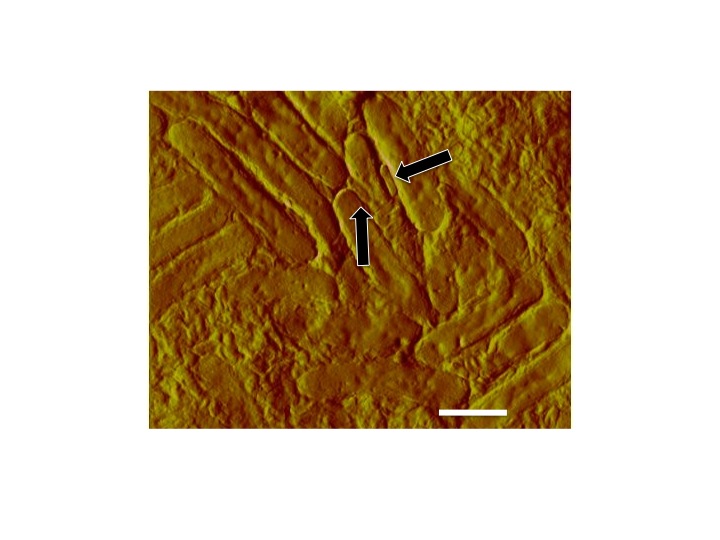 An unusual predatory bacterium’s ability to communicate with its own and its prey on surfaces may lead to new insights into how to fight antibiotic-resistant infections, according to a new Occidental College study published in the journal Applied and Environmental Microbiology.

The study by Chemistry Professor Eileen Spain and eight of her current and former students is based on eight years of laboratory research into the behavior of Bdellovibrio bacterivorous on surfaces. Bdellovibrio has the unique ability to find and attach itself to its food source (a prey bacterium like E. coli), burying itself between the inner and outer membranes of the prey cell. It then forms what is called a bdelloblast as it grows, releasing enzymes that break down the host, consuming its prey from within. Once all the nutrients within the prey cell have been absorbed, the growing Bdellovibrio cell splits up into several copies of itself, each then seeking new prey when released. In this way the Bdellovibrio can multiply so long as it has readily available sources of prey.

First described in the early 1960s, this predatory bacterium commonly found in river water and soil has developed a mechanism to persist in prey-scarce environments. In this case, Spain postulates that an ability to communicate with other bacteria in the cell community triggers the predators to go into survival mode. Spain and her team placed B. bacteriovorus and E. coli prey cells onto a surface, and at first observed that the Bdellovibrio cells began to consume their prey as expected. Then, unexpectedly the B. bacteriovorus segregated themselves into two visually distinct colonies on the surface: an inner, yellow colored region, and an outer whitish region.

When examined on the micron and nanometer scales, these two regions contain distinctly different types of Bdellovibrio populations; the inner region is characterized by the hunting cells typical of Bdellovibrio, while the outer population exhibits a mixture of cells including many bdelloplasts and some left over E. coli prey.

B. bacterivorous doesn’t always consume all of the available prey, and can co-exist with their prey. "They must have some way of creating a mechanism to persist in the face of starvation," Spain says. In an effort to preserve its numbers until a new source of prey can be found, the Bdellovibrio cell will suppress its metabolism, Spain postulates, essentially sequestering itself within the bdelloblast stage.

This segregation of Bdellovibrio suggests they not only sense the numbers of prey in their environment, but can "talk" to each other in the language of small molecules about how best to organize and maintain the community. While the predatory behavior of Bdellovibrio has been widely investigated, this indirect yet provocative evidence for chemical signaling within the colony is new and calls for more research into exactly how they may communicate.

Because bacteria thrive on surfaces, including human skin, Bdellovibrio research has far-reaching implications, Spain says. Despite the best efforts from many scientific investigations, it’s not generally possible to prevent bacterial aggregations, or biofilms, from forming. "But once it is formed, can we perturb the biofilm’s communication processes, or perhaps cause it to disperse?" Spain asks. "If we can understand how bacteria communicate in various environments, we may be able to control or manipulate them chemically to some degree."

This bacterium could thus serve as one of many tools to fight certain chronic infections. Spain notes that her research fits in with the goals of President Obama’s Task Force for Combating Antibiotic Resistant Bacteria and the Department of Defense’s interest in understanding how this bacterium could be used to treat wound infections in the military, for example.

Research on Bdellovibrio has the potential to help physicians treat infections in what Spain calls a two-pronged approach, "unleashing Bdellovibrio to attack an E. coli infection would not fully destroy the pathogen but may weaken it such that a round of antibiotics could finish the job." In addition, because Bdellovibrio is non-pathogenic to humans and is found in the human gut, skin and mouth, its chemical and biological processes at surfaces are part of a large, diverse, and complex microbiome that governs human health.

Having spent the past several years working to understand and characterize how Bdellovibrio acts on a surface, Spain’s lab and her collaborators at Mount Holyoke College, Wellesley College, SUNY-New Paltz, and Occidental College hope that investigators from other disciplinary areas can join their efforts to shed light on how Bdellovibrio "talks" and "listens" chemically in a microbial community.

Spain is quick to credit the work of her student researchers, who carried out their work during the regular academic year as well as during Occidental’s Summer Undergraduate Research program. Each student brought her or his own ideas to the investigation in the long study that at times involved the formulation of entirely new hypotheses and experiments, and the interpretation of copious amounts of data, she said.