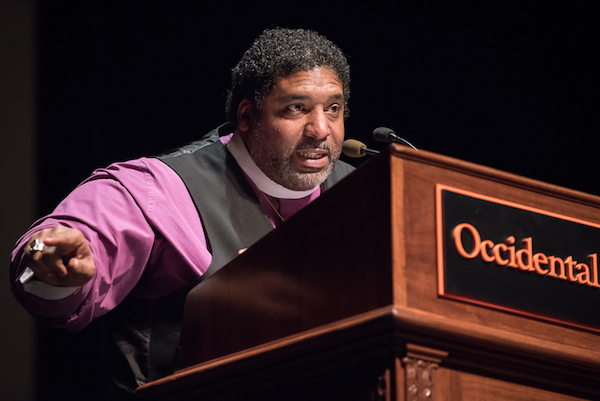 Placing the 2016 election in the broader context of American history, North Carolina NAACP leader and activist Rev. Dr. William Barber on Wednesday urged an overflow Occidental College crowd to be clear-sighted, resilient and resolute as they look to the future.

Speaking to a packed Thorne Hall 50 years after the Rev. Martin Luther King spoke from the same podium, Barber said his message was not about a single election or a particular candidate, but rather the need to address some hard truths, including the reality of systemic racism in this country.

"What’s going on here? We have to recognize the centrality of systemic racism, America’s original sin, that still affects our social DNA," said Barber, president and senior lecturer of Repairers of the Breach, president of the North Carolina NAACP, member of the NAACP national board, and convener of a statewide coalition of more than 200 progressive groups. "Progressives keep trying to find a way around race, but we can’t go around it—we have to go in it. Let’s deal with it … Let’s have a grown-up conversation about racism in this country."

Prior to his speech, Barber was presented with an honorary degree by Occidental President Jonathan Veitch and Trustee Carl Ballton ’69. "Today, we are proud to honor you for your labors on behalf of all Americans; your ability to build bridges in a society increasingly riven by deep divides; and the inspiring message of faith and justice that you proclaim," Ballton said.

Last November’s election was the result of a number of factors, including an embrace of fear, rather than facts, and a startling refusal to engage in the political process, Barber said, noting that 95 million people did not vote in an election that was decided by roughly 77,000 votes.

Equally important is the historic pattern of efforts to suppress the Black and Latino vote—efforts that continue today in North Carolina, where voting restrictions imposed by the Republican-dominated state Legislature remain in place despite a recent ruling by a federal appeals court that the restrictions targeted Democratic African-American voters "with almost surgical precision," he said.

Barber, pastor of Greenleaf Christian Church in Goldsboro, N.C., also offered an uncompromising critique of modern evangelical movement, which he said has adopted the false view that poverty is the result of God’s judgment. "These people have rejected the core moral values of a faith tradition that historically has helped America address slavery and economic injustice. … I can’t find anything in the scriptures that you can use religion to push down the poor."

But just as there is a long history of racism and economic disparity in the United States, so too is there a proud and effective tradition of resistance and redemption, he said.

"There are habits of prophetic resistance, that down through the years have gotten up from rejection and produced redemption," he said. "We are the inheritors of a proud legacy that has rejected injustice, the heirs of those who found ways to be resilient."

But a single speech or a single rally is not a movement, he cautioned. "Go back and read the history of the civil rights movement: they had campaigns, not rallies," he said. "Be prepared to run a marathon. Don’t get discouraged. … The race is not given to the swiftest or of the strongest, but to those that endure to the end."