For the Birds | Occidental College 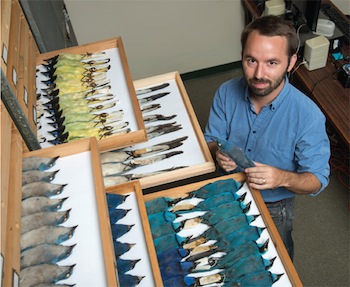 Not all birds of a feather flock together –- at least not on the avian genetic tree, according to groundbreaking new research by John McCormack, director/curator of the Moore Laboratory of Zoology and assistant professor of biology at Occidental.

"How the major bird types are related to one another has always been puzzling," McCormack said. "We found some interesting and weird relationships."

The article was published in the online journal PLoS One on January 29. It already has more than 1,700 page views, about 10 times more than the average for other articles released on the same day.

In what is perhaps the most sophisticated DNA analysis of birds to date, McCormack and his co-authors discovered that avian genetics was unexpectedly complex, with birds that look similar far apart genetically, and birds that appear quite different in actuality very close on the family tree.

For example, the study found that raptorial birds in the hawk and falcon families are not closely related genetically.  "It's an example of natural selection acting independently on two lineages resulting in a shared appearance, but not a shared history," McCormack explained.

On the other hand, McCormack’s DNA analysis found that a group of white seabirds called tropicbirds are related to a brownish, river-dwelling, Amazonian bird called the sunbittern. And a group of terrestrial birds that look almost like raptors (bustards) are closely related to a colorful group of fruit-eating arboreal birds called turacos. "Very weird," McCormack said.

In all, 33 species were examined -- including a chicken – from specimens collected by Louisiana State University.

"DNA has turned our ideas about what is and isn't closely related on its head," he added. "This is the largest data set ever applied to the problem, using new technologies for DNA sequencing. The difference is comparable to going spearfishing for DNA versus using a trawling net."

"It's the most DNA data anyone has ever thrown at this long-standing problem of bird relationships," McCormack said. "This gives us hope that even the hardest riddles about evolutionary relationships in the tree of life are ultimately solvable with DNA. One day we really will have that one tree that links all living beings."