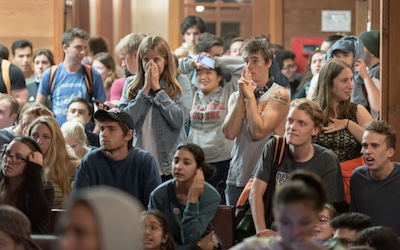 The results of the 2016 presidential election took nearly everyone by surprise — even Occidental’s 14 Campaign Semester students who worked on the front lines in local, congressional, gubernatorial and presidential campaigns in states ranging from North Carolina, Missouri and Florida to Ohio, Illinois, Pennsylvania, New York and Nevada.

Their reactions to the outcome ranged from shock to dismay to measured hope.

MacKenzie Bretz ’18, a politics major from Edmonds, Wash., campaigned in Miami for Dan Horton, who was defeated by the Republican incumbent in a race for the Florida House of Representatives. The morning after Election Day, she captured the sentiment of many of her fellow Campaign Semester students when she said, "I’m pretty upset and shocked. I think it’s really surprising, too, because it was made out that Hillary had the race. It is a really big shock."

Milo Keller ’18, a politics major from Graton, Calif. who worked for the Pennsylvania state Democratic party in State College, Pa., said, "I don’t even know what to say. It’s mind-boggling to me. It’s hard to comprehend. I’m in shock. I think everyone here is absolutely exhausted from all the work we did this weekend and throughout the whole campaign, and is in a state of shock. It’s hard to comprehend that we got Donald Trump.

"I think we have to do a re-evaluation of how we do things in this country, and of who we are in this country, because I think this represents a victory for a lot of things that we thought we had moved beyond," he added.

Keller also thought that the election’s outcome pointed to problems with the candidate-selection process: "We had Hillary and Bernie and we had no one else," he said of the Democratic Party’s choices. "Versus 17 Republicans who had national profiles."

"Personally I’m extremely disappointed about the presidential race, but we did all we could here in Nevada," said Ricardo Parada ’18, a politics major who worked for the Nevada Coordinated Campaign in Las Vegas (working simultaneously for Democratic local, congressional and presidential campaigns). "I’m really frustrated and saddened by the presidential election and scared for friends and family, but I feel that me and my team did what we needed to do. We elected the first Latina to the Senate [Catherine Cortez Masto] and the first Latino to the House [Ruben Kihuen]. There were a lot of victories last night as well."

Carson Malbrough ’19, a politics major from Los Angeles, said he was feeling "numb" but "trying to remain hopeful and spread positivity."

"I’m in North Carolina and our candidate, Roy Cooper, is the governor-elect," he said. "But as far as the presidential election, I am just trying to find a way to remain hopeful and think of ways that the young people can come together and organize to bring about the change we want and protect ourselves from the things we fear. If this is rock bottom, there is also potential for us to rise. I think we need to take advantage of this opportunity and stick together and figure out how to bring change.

"I also want us to take voting more seriously in this country and to understand that politics is not something you can afford to not pay attention to. More often than not, the plight of our lives is at stake," he added.

The students will return to campus next Monday for an intensive five-week seminar with politics professors Peter Dreier Regina Freer, where they will try to make sense of their experiences and describe their activities to the Oxy community.

Campaign Semester is the only program of its kind in the country, where students receive full course credit for working on a political campaign for a semester. Many students have described it as a life-changing experience.