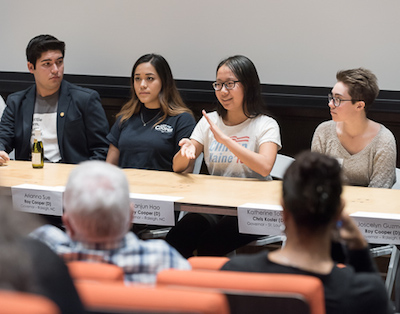 Occidental’s Campaign Semester students gathered in Choi Auditorium on December 8 to share what they had learned about politics, America and themselves while spending a semester working for political campaigns across the nation.

All 14 realized that they had to quickly learn to be self-sufficient. That local, grassroots politics are just as important as the big races. That it’s important to work for a campaign that you believe in. And that in the end, it’s not just looking good on paper or being a good person that wins a candidate a political race.

"We get obsessed on the Democratic side with building the perfect candidate," said Seth Miller ’18, a politics major from Vermillion, S.D. who worked for Tammy Duckworth’s U.S. Senate campaign in Chicago. "I don’t think that’s what is necessary. We need more candidates like Barack Obama who are legitimately inspiring and legitimately connect to people. Not just candidates with the right track record and the right resume."

"You need to find a candidate that you can passionately work with," added MacKenzie Bretz ’18, a politics major from Edmonds, Wash., back from campaigning in Miami for Dan Horton, who was defeated by the Republican incumbent in a race for the Florida House of Representatives. "It’s a lot of work. You’re working day and night. If you’re not 100% in and really passionate about what you’re doing it’s going to be not fun. I picked Dan Horton because he was young, passionate, exciting and looking to make a lot of changes."

The students also learned the technical side of how campaigns are run, from phone-banking to canvassing to media relations. "I was on the communications team and I saw how much power there is in marketing and messaging and how a message is framed," said Arianna Sue ’18, a politics major from Elk Grove, Calif. who worked for North Carolina gubernatorial candidate Roy Cooper. "For example, we talked about how HB2 [the transgender bathroom law] affected the economy vs. the inhumanness of the law. I think that captured a lot of the middle votes."

Finally, the students learned a lot about their own country. "Even though we may disagree, I think people take care of each other and care about one another," said Joscelyn Guzman ’18, a religious studies major from Modesto who worked for Cooper in Raleigh, N.C.

"I did a lot of phone calls and knocking on doors," said Bretz. "It’s easy to get discouraged when people are mean to you. But I think that I learned that most people are genuinely good people and want to learn and hear what you have to say. When you have that moment when you see someone understand what your candidate is trying to do, it makes every other moment when someone slams their door in your face worth it."

"It blew my mind how people from different coasts can have similar values and ideas despite different geography," said Sue. "I think those are shaped by their experiences more than where you live."

"I really valued my talks with people, such as my host family in North Carolina," said ManJun Hao ’20, a student from Beijing who campaigned for Cooper in Raleigh, N.C. "I learned about the beautiful history of North Carolina and all of its artists and writers. What I took away helps me not to judge people. We need to sit down and talk. We all just want a good life."

As far as the outcome of the presidential election, while many students say they were shocked by Trump’s victory, they did see inklings of it. "No one really expected what was going to happen in states like Pennsylvania and how many of the rural voters were going to turn out. I think there was a disconnect between what was expected and how things turned out. However, there was a lack of excitement for Hillary Clinton. That was worrying to me while I was there on the ground," said Milo Keller ’18, a politics major from Graton, Calif. who worked for the Pennsylvania state Democratic party in State College, Pa.

"I saw Trump enthusiasm at the North Carolina state fair," said Carson Malbrough ’19, a politics major from Los Angeles who campaigned for Cooper in Raleigh, N.C. "There were a lot of angry white guys wearing ‘Lock Her Up’ T-shirts."

In the end, "People devalue elections," said Ricardo Parada ’18, a politics major who worked for the Nevada Coordinated Campaign in Las Vegas. "But every vote and every election matters."

Occidental has offered Campaign Semester every other year since 2008. Some 100 students have participated so far. Students select a local, Senate, House, gubernatorial or presidential campaign to work on in a battleground state and spend most of the semester doing just that. It is open to any student of good standing regardless of major.

"These students have just been remarkable," said Peter Dreier, the E.P. Clapp Distinguished Professor of Politics, who organized the program along with politics professor Regina Freer. "Whether their campaigns won or lost, these students learned a lot about themselves, they learned a lot about democracy and its flaws and strengths, and they learned a lot about America. Even though this was for many of them a depressing outcome on the national level, most of them somehow have hope that we can overcome this and turn America into a better place, because they met people who don’t fit the stereotype. They saw how complicated people are. I know it’s been inspiring for me."

Campaign Semester is the only program of its kind in the country, where students receive full course credit for working on a political campaign for a semester. Many students say it has been a life-changing experience, and many have gone on to work in politics professionally.