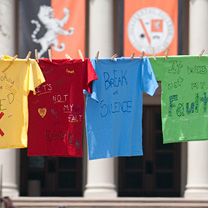 Preliminary results of Occidental’s first student sexual assault climate survey released today show that 8% of respondents report they have been assaulted while at Oxy. Most respondents knew their assailant and the majority of assaults occurred during their first year, the survey shows.

Because responses to the anonymous online survey conducted Feb. 16-March 13 come from a self-selected group, it isn’t possible to make sweeping generalizations about the extent of the problem among the Oxy student body as a whole, according to Dr. Teresa Kaldor, the College’s director of institutional research. Some 31 percent of Oxy students completed the survey.

"While we already know that sexual assault is a problem at Occidental, the survey provides us with more information that we need to respond effectively and improve prevention education programs," said Title IX Coordinator Ruth Jones. "Most importantly, the survey together with other sources of information provide us with an Oxy-specific baseline that we can use to track trends and assess our efforts."

Occidental will continue to conduct a climate survey on a regular basis, Jones said. "We will decide what we need to assess our campus climate, while also following any legal mandates that may emerge," she said.

Among the survey results:

"The preliminary survey results show that while we have taken important steps forward in addressing sexual assault at Oxy, we still have a long way to go," said Jones. "Sexual assault is a complicated issue that is no respecter of gender, color, or sexual orientation. Survivors are diverse group and we need to make sure that our outreach and support efforts are accessible to all members of the community."

Kaldor is working on a more detailed analysis of the survey data that will be made public at a September 24 campus town hall meeting.

The survey was developed by the Higher Education Data Sharing Consortium (HEDS). HEDS is the independent not-for-profit corporation that supports its member institutions – national liberal arts colleges and private universities – in strategic planning and research.

Some 57 institutions participated in the HEDS survey, with an average response rate of 27%. To ensure the anonymity of Occidental respondents, HEDS did not include student citizenship, race, residence, or sexual orientation in the raw data that it provided to Kaldor.