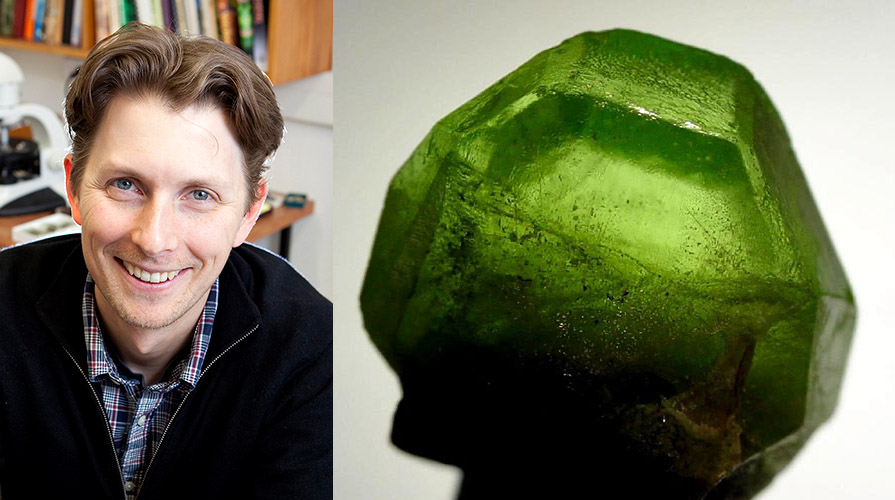 A newly identified method of producing a compound commonly used in antacids is the key to a process that provides a viable pathway for significant industrial-scale reductions in man-made greenhouse gas emissions, according to a new paper published by an Occidental College geologist and an international team of researchers.

Magnesium hydroxide’s ability to react with CO2—the most significant of the Earth’s long-lived greenhouse gases—has long been understood, says Occidental Professor of Geology and paper co-author Christopher Oze. What has been lacking is an energy-efficient industrial process capable of producing enough magnesium hydroxide to have a substantial impact on global warming.

The key ingredient is olivine, a common greenish mineral found around the world. Ground into a powder, combined with hydrochloric acid and subjected to a direct electrical current, trials show that 100 metric tons of olivine would yield 35 metric tons of magnesium hydroxide and 35 metric tons of amorphous silicate—a versatile material used in the manufacture of semiconductor circuits and cement, among other uses.

Because the new process makes it possible to produce magnesium hydroxide in bulk, the compound can be shipped directly to industrial and manufacturing sites to “mineralize” the carbon dioxide being produced and keep it out of the atmosphere. “It has much greater utility than other options being explored, such as transporting and  injecting carbon dioxide into the ground,” Oze says.

More importantly, this simple method may result in net negative carbon dioxide emission, even if coal-fired energy was used to power the process, the paper notes. Additionally, the acid used in the process is completely recoverable for reuse.

How large an impact could the new process have on greenhouse gases? Given the abundance of olivine around the world (it’s related to serpentinite, the official California state rock), operations on a massive scale could in theory remove and sequester all of the estimated 40 billion metric tons of man-made carbon dioxide produced last year and continue to do this for hundreds of years.

“The simplest solution would be to reduce CO2 emissions,” Oze says. “But here’s a scalable process that’s readily available, so that if we’re collectively willing to operate at the level of magnitude needed, we are ready to sequester and use people-made CO2 at a scale once thought impossible.”