Concern of the Natives | Occidental College

Concern of the Natives 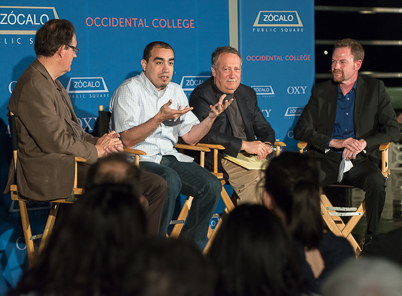 This year, the majority of Los Angeles residents will be native Angelenos – what does that post-immigrant future portend for L.A.?

That’s the question that provoked a lively discussion on March 12 at the first of Occidental College and Zocalo Public Square’s 2013 OxyTalks series at the Petersen Automotive Museum – a discussion that covered not only the cultural, economic, and political implications, but what assimilation was, is, and should be.

From Kotkin’s perspective, a native majority isn’t necessarily a plus. "Great cities are energized by young ambitious people. The immigrant who’s struggling, that’s the essence of a great city," he said. "They were made and re-created by people who came from someplace else."

Myers emphasized the importance of investing in the education of the young native majority who ideally will be productive taxpayers and consumers in another 20 years. "You get what you pay for," he said. "Studies show that for every dollar invested in higher education you get four and a half back. You need to invest taxes to make taxes."

Whether this young generation of natives – many of them the children of immigrants – will be assimilated, and what that terms means, is complicated, Mora said. "The idea is that assimilation is good, so we have all these measurements of that. We assume that the more English they speak, the better off they are. But we have research to the contrary. It’s a lot more complicated picture."

Audio and video of the entire session can be found on the Zocalo website.