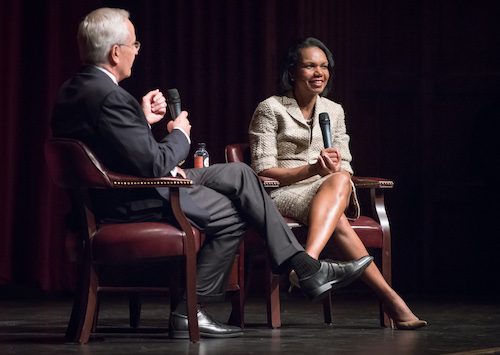 In her prepared remarks and in response to questions from fellow Stanford Professor (and Occidental trustee) Chip Blacker ’72, Rice covered a wide range of topics, including whether she might give any thought to running for public office. The answer, once again, was a firm "no."

Rice said she is constantly asked about the American presidential race when traveling overseas, usually with a question along the lines of, "Has the United States lost its collective mind?" She cited several contributory factors, including a national government "that mostly talks to itself"; the polarizing effect of online and social media platforms that make it easy to exclude dissenting voices; and candidates who offer too-easy answers to angry questions about the decline of the middle class.

Answers to stresses now being placed on the international system are harder to come by, whether one is looking at what is happening in the Middle East, Europe, China, or Brazil, she said. The flow of refugees from Syria has placed enormous strains on Germany and other European countries, prompting the rise of dangerous right-wing populist movements. "Europe in is in a governance crisis right now," Rice said. "The migrant crisis isn’t just changing the face of the Middle East, it’s changing the face of Europe."

Similar hostility to immigrants in the United States is misplaced, she said. "Immigration is the lifeblood of who we are. Immigrants have made this country vibrant and vital time and time again. Not just the people who come here, but the people who are here. We turn them away at our peril."

Asked about how she might address current international instability, she proposed reinstating the idea of deterrence. "I’m really quite concerned by some of Russia’s recent actions, where you have military aircraft buzzing U.S. Navy ships. That doesn’t happen without some kind of clearance at the top," she said. "Putin is pushing the envelope in some ways I didn’t think he would." One way to push back would be selling more arms to the Ukranians, she suggested.

It’s also essential to find a way to defend against terrorism in such a way that the public is not in constant fear of attack, she said, drawing a parallel with California’s attitude toward earthquakes. "The danger is there, and we take appropriate precautions, but it’s not in the front of our minds."

Rice also was asked about the current state of race relations in the United States.

The crowd of 800 students, faculty, staff and alumni in Thorne Hall saluted Rice with a standing ovation at the end of program. Earlier, as she began her prepared remarks, about 30 protesters critical of her role in the Iraq War stood and silently turned their backs.

Prior to speaking in Thorne, Rice met privately with a small group of Occidental students, including a number of diplomacy and world affairs majors. The conversation there touched on similar topics, including what Rice called "the rough and tumble" of policymaking in Washington, D.C.

Rice’s appearance was made possible by the Jack Kemp ’57 Distinguished Lecture Series, created to engage with Occidental students and faculty in dialogue on important issues of public policy such as the political economy, economic growth in the context of a market system, communitarian values, and bipartisan relations.