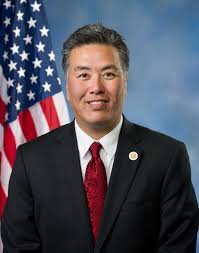 Rep. Mark Takano (D-Riverside) will address the lessons of the incarceration of Japanese-Americans during World War II in Occidental College’s Choi Auditorium at 10 a.m. on Saturday, September 23 as part of Occidental’s "Never Again" series.

In "Echoes From the Past: The Japanese Incarceration and Today’s Executive Orders," Takano will discuss the relevance of the history of Japanese-American incarceration to today's political climate, including the Muslim ban, immigration and the recent decision to rescind DACA, as well as his personal experience. Takano’s own parents and grandparents were incarcerated during WWII. The talk is free and open to the public.

It marks the February 19 anniversary of President Franklin D. Roosevelt’s signing of Executive Order 9066 in 1942, which led to the incarceration of more than 120,000 Japanese-Americans—more than two-thirds of them U.S. citizens—in 10 hastily constructed camps in California and six other states.

"What happened to people of Japanese ancestry in our country 75 years ago remains relevant today," said Julie Kimiko Santos, associate director of international programs at Occidental and series organizer. "Now more than ever, it is important to know how and why this tragedy occurred, and the many lessons to be learned."

Earlier this year, Takano introduced a congressional resolution to establish a Day of Remembrance to reflect on the injustices endured by thousands of men, women and children who were the victims of discrimination during World War II. He also introduced a second resolution to recognize Fred Korematsu Day in honor of his lifelong fight to defend the constitutional rights of all Americans.

A Riverside native, Takano worked his way through Harvard and returned home to Riverside to teach in the Rialto Unified School District. In 1990, he was elected to the Riverside Community College District's Board of Trustees. In 2012, he became the first openly gay person of color to be elected to Congress.