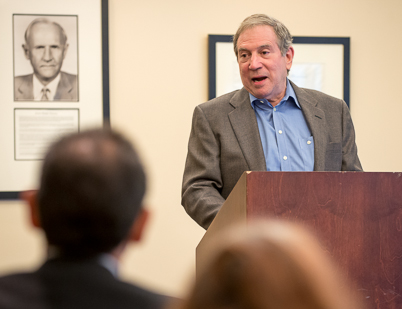 Current U.S. copyright law is inadequate to protect music, film and television in the digital age and should be changed to require some kind of active monitoring to detect infringement, according to one of the country’s top entertainment lawyers.

"Copyright revision is not a sexy political issue," said Leher, a philosophy major-turned-attorney who was invited to speak as the Philosophy Department’s 125th Anniversary Distinguished Alumni Speaker. "Copyright law is difficult to understand and Congress has not given it enough thought."

A partner with Greenberg Traurig LLP, Leher formerly was an executive with Hollywood Records and Dreamworks Records and is a longtime representative of the Rolling Stones. He has more than 40 years’ experience representing recording artists, music producers, music publishers, songwriters, personal managers, agents, record companies, and publishing firms.

The Digital Millennium Copyright Act’s "safe harbor" provision allows internet service providers, like Google – which owns YouTube, the world’s largest music purveyor – a "safe haven" against claims of copyright infringement if the internet service provider has neither knowledge of specific infringements nor an awareness of facts which would make apparent specific infringements, Leher said. In Viacom v. YouTube, a case closely watched in the entertainment business, the court concluded that general knowledge of infringing activity – which YouTube clearly has – is not sufficient to constitute infringement.

"Technology has dramatically changed since the passage of the digital millennium copyright act and YouTube certainly has the technology to monitor and block infringing material before it becomes available to the public, but under current law it has no obligation to do so," Leher said.

"Everyone is effectively forced to make a deal with YouTube. The safe harbor provision gives Google free reign to dictate what’s going on in the marketplace," he continued. "Now we have a quasi-monopoly supported by this statute."

Among the audience gathered to hear Leher was one of his old teachers, Philosophy Professor Emeritus Hal Lauter. "He still has all of his Loftsgordon lecture notes," Philosophy Professor Saul Traiger said in his introduction of Leher, referring to Donald Loftsgordon ’50, the influential teacher after whom one of Oxy’s top teaching awards is named.