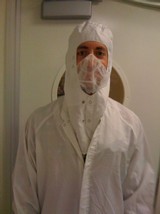 When Jason Heidecker ’04 talks about NASA’s Curiosity spacecraft, which he helped build for its current mission on Mars, he sounds like a kid boasting about a favorite toy.

"It has all kinds of stuff. It has a laser that it can use to vaporize rocks up to 30 feet away and analyze the chemical composition of what is vaporized," said the Jet Propulsion Laboratory intern turned full-time staffer. "There’s a little on-board chemistry lab where it scoops and dumps the soil inside itself and analyzes it and sees what its composition is. There’s another instrument that can detect if there is liquid water as far as 6 feet under the surface."

Curiosity’s purpose is to look for the building blocks of life on the Red Planet. "We’ve never confirmed the pre-existence of life outside this planet, and Curiosity is the first chance we have to do that," Heidecker said.

As the digital parts specialist in JPL’s Mission Assurance department, Heidecker inspected all of Curiosity’s digital electronics–about 500 parts in all--to make sure they worked properly and would survive the mission to Mars. That included cameras, microprocessors, and the flash memory that stores the images.

"I review and improve and test the parts," he explained. "I say yes or no, or maybe suggest an alternative, or a test plan. I do failure analysis, trying to understand why something broke. During the course of building and testing, something always goes wrong. They break things all they time, so they come to me for a risk rating—is it riskier to replace the part or just leave it? That’s half my job; the other half is testing new technology that we might want to use on future missions."

Heidecker applied for an internship at JPL in Pasadena as a freshman at Oxy. He was hired as a webmaster, a job he kept throughout college. When he graduated in 2004 with a physics degree, he stayed on, moving to an engineering position in Mission Assurance. He met other Oxy alumni there, including Nate Villaume ’07 and Mark Garcia ’87.

He soon joined the team working on Curiosity. The electronics on the space rover are the same parts as those found in TVs and cellphones, but radiation and extreme temperatures put them to the test in space. Extensive analysis of the parts was "one reason the spacecraft cost $2.5 billion," Heidecker said, adding that the actual parts only cost about $10,000. "This is the most complicated thing sent to another planet, by far," he said.

The rover made a perfect landing on the Red Planet on August 5. Now, "I’d like a little Martian to jump up on the rover and start looking in the camera and poke his little fingers in there," Heidecker told his hometown newspaper, the Wichita Falls, Texas, Times Record News, on August 12.

According to Heidecker, Curiosity can be reprogrammed each day to do whatever the mission team at JPL wants. But Heidecker’s job is mostly done. He will be called on now only if a part breaks and something needs to be reconfigured.

"So far so good," he said. "Everything’s going as planned. So far we’ve been really fortunate that such a complicated spacecraft just works perfectly. In a week they’re going to start turning the wheels and moving it around. In the next month or so we’ll start seeing data, and we’ll find out if there are any traces of life."

Just as Curiosity is examining Mars, every year a fresh crop of Oxy interns roves over to explore JPL, including six this last spring. JPL Director Charles Elachi recently noted that Occidental "is an important pipeline for JPL, providing us with scientists, engineers, and even members of our executive leadership." More than three dozen Oxy alumni have gone on to professional careers with JPL, including Diane Evans '76, director for the Earth Science and Technology Directorate, and Michael Sander, '63, manager of the Exploration Systems and Technology Office.