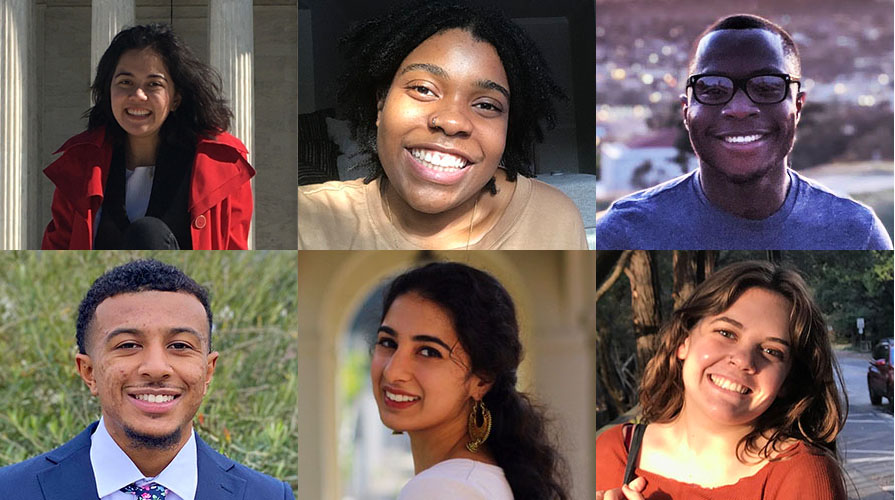 Each year, the Dean of Students recognizes seniors who, through their involvement on- and off-campus, embody Oxy’s four pillars of Equity, Excellence, Community and Service.

The College recognizes these exceptional undergraduates for their passion, dedication, hard work and commitment to the Oxy community and beyond. This year, six winners were selected from the Class of 2020. 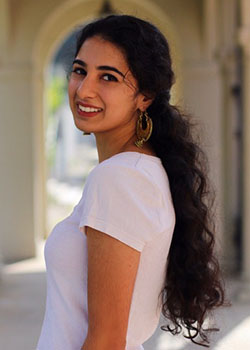 As a first-generation Punjabi, Sikh student, Jagmit came to Oxy with the hope and intention of using her education to uplift and empower communities. She was able to accomplish this goal thanks to the opportunities and support she received from mentors, peers and organizations. Jagmit was extensively involved with the Center for Community Based Learning, where she worked as the Office and Events Coordinator, Education In Action (EIA) Facilitator and the EIA Program Co-Coordinator. She also had the wonderful experience of being a four-year Dance Production choreographer, sharing her cultural identity with the Oxy community through traditional Bhangra dancing.

As a member and eventual co-president of the South Asian Student Association, Jagmit worked with fellow club members to plan Diwali and Holi and create an intentional space for South Asian students on our campus. She also served as an Orientation Core Leader her senior year. As a Diversity and Equity Board member and Senator for ASOC, she collaborated with student representatives of the college campus on a number of initiatives, including creating a report to demand student-centered changes to the MSI program. She was also an Obama Scholars Fellow at Oxy. She received Distinction on her senior comps, “Candidate Strategies of South Asian American Politicians,” as there is little to no research on South Asian Americans in the political landscape in current literature. Jagmit is incredibly grateful for the opportunities and people she met at Oxy as they are integral to how she serves her communities today and in the future.

I had the chance to work with Jagmit in a variety of ways during her time at the College. She’s very collaborative, measured, mature and smart. And she always employed a lens of equity throughout her involvement at the College.   –Dean of Students Rob Flot 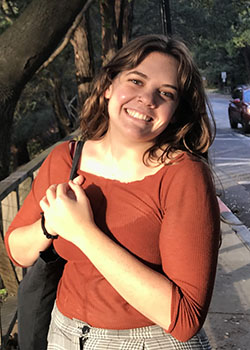 Maggie is grateful for the friends and mentors who supported her at Oxy. During her college years, she worked as a Community Food Systems intern with the Urban & Environmental Policy Institute, an Education in Action Facilitator with the Center for Community Based Learning, and a Values & Vocations Fellow with Pacoima Beautiful and Avenue 50 Studio. She was also a Student Life liaison for the Diversity and Equity Board, where her favorite memories include helping open the Lavender Lounge and co-leading a class for LGBTQIA+ students that studied the intersection of murals and social justice.

Maggie is also thankful for her time as a Richter Scholar, which allowed her to study climate displacement and relocation planning at the University of the South Pacific in Suva, Fiji. Currently, she works for Sustainable Economic Enterprises of Los Angeles in their programs to expand food access at farmers markets, and she hopes to continue work on issues of food justice, urban agriculture and climate justice.

I worked reguary with Maggie on many initiatives from the very first semester I arrived on campus. Maggie is very engaging, passionate, and committed to every initiative she gets involved with. Maggie left Oxy a better community due to Maggie’s presence and efforts.   –Rob Flot 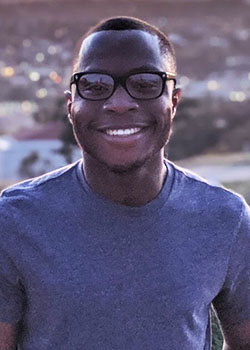 With a commitment to promoting a climate of inclusivity and equity at Oxy, Malcolm served on the ASOC Diversity and Equity Board (DEB) as a club liaison working to support and advance the presence, work, and funding of various cultural clubs and affinity groups on campus. As club liaison, he led DEB’s collaboration with student leaders to plan and execute various cultural programs, including Unity Week—a week of intersectional programming between cultural clubs and affinity groups on campus. He was also a member of the Spring 2019 student-led Cultural Graduation Committee, which successfully planned and executed that year’s cultural graduation ceremonies and worked with the Office of the President, Dean of Students’ Office, and SLICE to develop permanent structures for planning and executing future cultural graduation ceremonies.

In Fall 2019, Malcolm spent a semester participating in the Oxy at the United Nations program in New York City, serving as the Communications Program Assistant and interning at the Permanent Mission of the United Kingdom to the UN. He also participated in the CIEE Cape Town Community Development and Social Justice Summer Program in South Africa. Malcolm served as a staff writer with the college newspaper, The Occidental, and worked as a caller with Telefund. Malcolm was also an active member of the Africa Students Association (AFSA), the Black Students Alliance (BSA), Harambee, the Intervarsity Christian Fellowship and the Transfer Students Union (TSU). He graduated magna cum laude from Occidental.

Malcolm was very involved in a variety of capacities during his time at the College. I first met Malcolm at a dinner for transfer students at my home. Malcolm is a quiet yet strong leader, who was committed to service at the College throughout his tenure as a student.   –Rob Flot 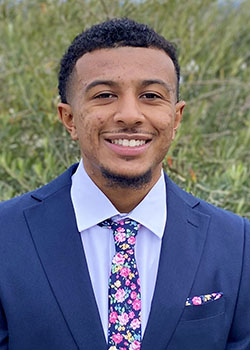 Tyler was born and raised in Los Angeles. At Oxy, he ran on the Track and Field team, serving as captain for two seasons. He was a member of the Black Student Alliance (BSA), Harambee, and the Student Athlete Advisory Committee (SAAC) as well. Tyler undertook four internship and research opportunities at Oxy, including a Legal Advocacy Internship with Public Counsel, worked as a research assistant through the Stanton Fellowship, an Outreach Internship with the League of Women Voters and an internship with the Los Angeles County Board of Supervisors, where he connected Second District constituents with appropriate County resources. Following graduation, Tyler plans to work for a year or two while studying for the LSAT and then go to law school.

Tyler was on the search committee I led to hire our current Athletic Director, where he served extremely well. However, I came to know Tyler best through his role with the track team. I always observed Tyler to be a strong, fiercely loyal, and humble leader and community builder—both on the track team, and in the Black student community at the College. His mark on Occidental will last a long time.   –Rob Flot 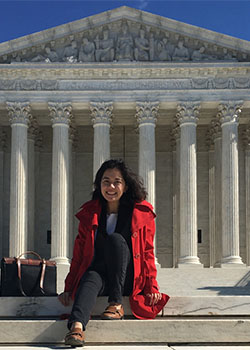 During her time at the College, Emily Jo Wharry served as editor-in-chief of The Occidental, spent three years as a resident advisor of Chilcott Hall, and worked as an advocate for campus-wide restorative justice initiatives. She played an important role in introducing restorative philosophy and practices to campus, grounded in research and community needs, and with guides, curriculum and models that will support these efforts into the future. She was a co-recipient of both the Hardy Prize for best senior history thesis and the Jaquette Prize for politics seniors with the greatest community impact. Her fondest memories at Oxy are mentoring writers at the newspaper, working alongside staff and faculty mentors on restorative justice projects, and meeting lifelong friends. She graduated from Occidental cum laude.

Emily Jo and I worked on numerous projects together, including restorative justice initiatives and the student experience strategic planning process, among other things. Emily Jo is wise beyond her years, and it shows in the insights and wisdom she brings to bear in the projects she involves herself in. Further, Emily Jo doesn’t do anything halfway. She shines with excellence in everything she does.   –Rob Flot 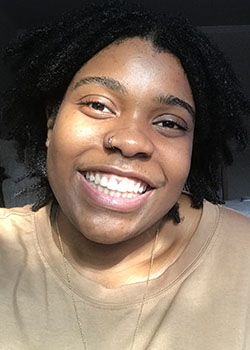 Kayla dedicated her time at Oxy to learning the tools to empower communities much like her own. Coming from the Bronx, NY, she grew up seeing good people slip through the cracks and vowed to do everything she could to disrupt this cycle both in her professional and personal life. In the summer following her first year, Kayla participated in the UEP Housing Internship and interned with Esperanza Community Housing Corporation. Through this internship, Kayla saw the importance of community organizing and popular education and ultimately decided education was the means through which she was best suited to support and empower communities. This realization was cemented by her work at the Center for Community Based Learning (CCBL) throughout her four years at Oxy. Whether it was working as an Education in Action (EIA) Facilitator or Co-Coordinator for the EIA program, Kayla found ways to use community partnerships to push education at Oxy to be meaningful both for students and community members.

Kayla served as a tutor for students in transitional housing through the School on Wheels program, tutored the children of various Oxy staff members and had several teaching assistant jobs. Each of those experiences pushed her to think critically about what community-based learning looks like and areas that institutions like Oxy can grow in the work they do. Kayla supported students on campus through her work with the Obama Scholars Program and as the Club Liason for the Diversity and Equity Board. Though Kayla is being named as the recipient of this award, she recognizes that her commitment to this project is in large part a reflection of the love, energy, and time that mentors and leaders have poured into her for her entire life. She is accepting the award on their behalf.

Kayla and I met early on in my time at Occidental. Kayla was extraordinarily committed to issues of equity and justice throughout her time here. She regularly, necessarily and appropriately challenged many of us at the College to do better and be better—and she was successful in doing so. I think Kayla’s meaningful engagement helped to move Oxy forward toward a goal of equity and justice for all.   –Rob Flot