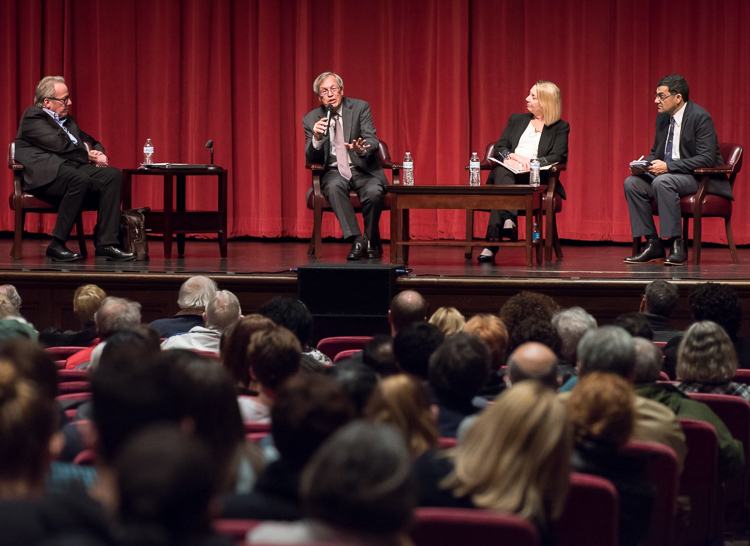 A constitutional scholar, an award-winning journalist, and a Muslim community advocate on Feb. 6 engaged in a wide-ranging discussion of First Amendment rights and whether current legal standards address every kind of expression and the issue of disparate access to audiences.

Focusing on campus free speech issues, Chemerinsky sought to stake out a middle ground, insisting that protecting freedom of speech and creating inclusive spaces for all students are not at odds. "Of course colleges and universities should be safe spaces for students. I believe campuses need places where students can be comfortable," he said. "I have no problem with trigger warnings – I have long given trigger warnings in class myself. But I think it’s wrong for campuses to require them."

The law and the courts are clear: all ideas can be expressed on campus, no matter how offensive. "I don’t minimize how hate speech undermines the dignity of individual," he said. "But every effort to restrict hate speech on campus has been ruled unconstitutional because they have been so vague. Government can’t ever punish ideas, and colleges and universities should never do so."

Previous legal decisions don’t seem adequate to address the kinds of speech issues we face today, Montag said in his opening remarks. For example, Muslims in America are now faced with violence and intimidation to the point they feel they can’t wear a hijab or speak Arabic in public. "How do we address that attack on freedom of expression?" he asked.

Freedom of speech is not just the ability to speak, but is also a question of who controls the narrative, Al-Marayati said. This has long been the case in news coverage of the complex issues facing the Middle East. "Free speech not just a legal issue. It’s important to talk about court of public opinion," he said. "When the other side doesn’t have the opportunity to drive the narrative, then selective free speech is really suppression of the ability of people to understand issues impacting them."

Mainstream journalists constantly wrestle not only with how to define objective journalism, but what their First Amendment rights are as individuals and what that means for their reporting, Pyle said.

Mere balance in news coverage is not the goal, Pyle said. "I don’t think talking heads, one on each side, gets us very far." Objective journalism is fact-based, and journalists should not be advocates, but strive to maintain neutrality. "I talked a lot about this with the newspaper [the student-run Occidental Weekly] today. Campus journalists are feeling their way through this issue, that sometimes you wear two hats, protestor and journalist. I believe you can’t wear both at the same time."