A Futbol Fanatic in London 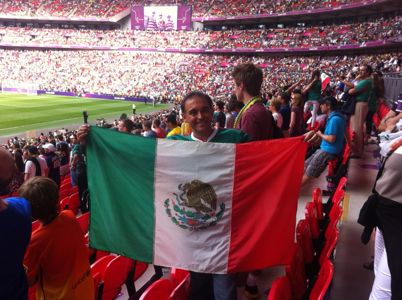 When Dean Jorge Gonzalez learned his beloved Mexico team would play in the Olympic gold medal soccer game, he wasted no time. Here are some excerpts from his journal.

10:58 a.m.: Use my frequent flier miles and buy my plane ticket to London.

The last 24 hours have been remarkable. I knew that if I wanted to go to London to watch Mexico play for the gold medal, I needed to move fast. So within eight hours of the end of the semifinal I had my plane ticket, game ticket, and hotel reservation. It was amazing how all the stars were perfectly aligned within a few hours.

This afternoon I needed to take care of one more thing before going to the airport. I needed a pole for my flag. This is the same flag that has been with me at six World Cups. Thankfully I was able to find one quickly. I went home to change. As you might imagine, I am wearing one of my Mexico jerseys for the plane ride. It was great walking through the airport with my flag and jersey. People were excited to see someone who was going to London to support Mexico.

It is going to be a remarkable few days ... I can't wait to be at Wembley Stadium.

My flight to London, while a bit delayed, was uneventful. I took the express train to Paddington and then walked a short two blocks to my hotel. It is in a beautiful neighborhood of Victorian buildings that have been converted into hotels. As soon as I dropped my bags, I decided to go pick up my ticket for the game. The will-call office was also fairly close to the hotel (in fact, this was one of the reasons I chose this hotel). Picking up the ticket was very efficient. The feeling of touching the ticket for the first time is really hard to describe, but it was truly unforgettable. I almost gave a big hug to the lady who gave me the ticket! I have met quite a few Mexicans in town who are looking for tickets and they cannot believe my luck in finding the ticket so easily.

In the evening I met one of my cousins, who just finished an MBA in the UK and who is now living in London. We had dinner at a wonderful pub. We were also joined by one of his friends from Mexico City who is about to start a master’s program in finance here in London. We had a great conversation that covered many topics, but it always came back to Mexico's futbol team. Both of them were at the semifinal in Wembley but do not have tickets for the final yet. Great first day in London!

During my second day in London, I decided to look for tickets for an Olympic event. I found one company that is in charge of selling tickets to Mexicans. I went to their office and was able to find a very good ticket to the boxing semifinals. I immediately took the tube to the Sports Complex.

As I approached the complex, it was fun to see more and more people wearing colors from all over the world. My seat was great (10th row). I got to watch 10 semifinals, from light flyweight to heavyweight. The atmosphere at the arena was superb. Several fights included boxers from either Great Britain or Ireland, so the crowd was loud. I got to sit next to a large group of Ukrainians who were cheering for a couple of their boxers who won their fights.

After boxing was over, I took the train to the Olympic Park area. While you need a ticket to enter the park, the whole area around it is full of stores, pubs, etc.  It was packed with people from all over the world. I spent a couple of hours there and then came back to town to Hyde Park. They have set up a very large area with four huge screens where they show the Olympic events live. There were thousands of people there. I watched a bit of the diving competition (the two Mexicans made it to the next round), the women's hockey final (the Dutch fans have always been among my favorites), and part of the bronze medal soccer game (the Korean fans reminded me of their cheering during the 2002 World Cup).

I wore another of my Mexico jerseys today. Lots of people told me they were hoping that we will win tomorrow. I also talked with a good number of Mexicans. I have always loved the night before a big game. The combination of excitement, anxiety, and optimism is electric!

I can't wait until game time. I can feel it: We are on the edge of glory!

I wish I was a better writer to be able to share with all of you the incredible day we had in London today. I will do my best, but I am certain I will come up short in the description of our emotions.

Today was another spectacular day. It was sunny and the high must have been in the mid-70s. This morning I decided to go watch the race walk and support our marchistas. The nice thing about this event is that you get incredibly close to the athletes.  You can stand no more than 10 feet away from the course. And since they had a relatively small circuit, you get to see them go by many times. I could not stay until the end of the race (it lasts more than three hours), since I wanted to go to Wembley early to absorb the atmosphere.

I took the tube to Wembley. As I got closer, the number of Mexican fans continued to increase. By the time we got to the stadium, we were all singing in the trains. There were tons of people looking for tickets around the stadium. I got to see several transactions take place (an economist is always interested in how different markets work). It was interesting to see that prices in the secondary market were not that much higher than the regular prices (perhaps 50%).

I got into Wembley about one hour before kickoff. What a stunningly beautiful stadium! The stadium steward at my gate saw my jersey and flag and immediately gave me a strong handshake and thanked me for the great time he had in Mexico during the 1986 World Cup (I had a long conversation with him at end of the game). My seat was amazing: 26 rows up and on the 45-yard line. I was surrounded by people from all over the world. To my right there were two guys from Switzerland, to my right and above me there were Brits, and below me a Canadian with his American son. There were quite a few Mexicans around. I suspect that there were about 5,000 to 10,000 Mexicans in Wembley, although we cheered like an army of over 100,000.

The beginning of the game was dreamlike. Within a couple of minutes we were ahead. It seemed so close and at the same time so far away. We had Brazil where we wanted them, but it would be hard to defend a one-goal lead for 88 minutes!  At halftime I had several great conversations with my neighbors. One of them wanted to take a picture with me and my flag. I told him that this flag had been with me during six World Cups but that if we got the gold medal, this was going to be its last game.

The second half was a bit less stressful. Our team was able to control the ball a bit better and to cover their forwards very well. The second goal was glorious. I screamed for minutes in celebration. A couple of minutes before the game ended, one of the English fans who was sitting behind me told me that he was a soccer fan like me and that he knew I was not going to be able to take pictures during the celebration because of all the excitement. However, he wanted me to remember these moments and have pictures of them. So he asked me for my camera and told me that he would take pictures and videos and return it after the medal ceremony. Such a thoughtful and kind person!  He gave me a huge hug when he returned my camera and told me that he understood how I was feeling.

Brazil’s goal added stress to the last seconds of the game, but when the referee ended the game, it was a magical moment!  We had won the gold medal in futbol at one of the great sports cathedrals! The most important medal of the games was ours!!! There was not a single dry eye among any of us -- wonderful tears of joy that I will remember forever. Queen’s "We Are the Champions" played at some point during the celebration. This could have not been choreographed any better. The medal ceremony was also very special. However, it is quite hard to sing the national anthem while tears of joy continue to flow. Seeing the Mexican flag being raised in Wembley is another one of those moments that I will never forget.

After the ceremony was over, I tried to leave Wembley a couple of times but I could not do it. I did not want that moment to end! Both times I turned right back. A Mexican fan saw me doing this and he told me he was having the same feelings about stepping out of the stadium. The stadium steward also gave me a big hug and his contact information. He told me to call him next time I come to London because he wanted to take me to an Arsenal game.

I met my cousin Juan and his friend from Mexico City outside the stadium (they were able to buy tickets in the secondary market). We took the Tube back to town. Our goal was to go to celebrate with all the Mexicans at the "Angel" (Admiral Nelson on the top of his column in Trafalgar Square played the role of El Angel de la Independencia in Mexico City’s Paseo de la Reforma). There were a few thousand of us there and we sang and danced for a couple of hours (there was even a mariachi there).

Eventually, we left Trafalgar Square and had dinner at a pub nearby. There was lots of cheering in there as well. Any time we saw a Mexican fan we had to start a new cheer!

I got back to my hotel around midnight. However, I cannot fall sleep. It has been a glorious day that my body does not want end.  ¡Gracias de nuevo a la vida por darme tanto!

Today Mexico won the gold medal in Wembley!  We are the champions!!!