Get Bent with the Karamazovs | Occidental College

Get Bent with the Karamazovs 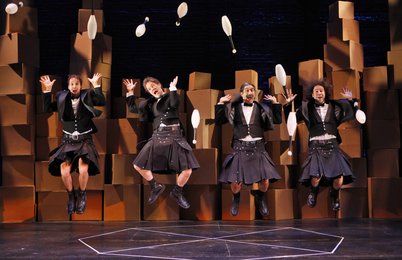 As this year’s Hume Fellows, the acclaimed quartet the Flying Karamazov Brothers will bring their comedy-juggling spectacle 4 PLAY to Occidental for a not-to-be-missed performance Friday, September 14 at 8 p.m. in Thorne Hall.

Bent’s childhood juggling hobby had morphed into an obsession by his teen years. The fact that the music major also plays trombone and sings made him a natural fit for the group. (Yes, he can play trombone while juggling.)

Among the Karamazovs’ repertoire is something known as the "Terror Trick," in which they gradually introduce nine items—a cleaver, torch, salt shaker, ukulele, skillet, fish,  egg, block of dry ice, and bottle of Champagne (which they call a "time bomb")—then juggle them all at once, only to end up cooking the fish and the egg in the skillet and drinking the Champagne.

They also perform a trick called "The Gamble" in which "the Champ" (portrayed by Dmitri Karamazov) will juggle any three items provided by the audience (certain rules apply).

Tickets are free for Oxy students with ID; $10 for Oxy alumni, faculty and staff; and $15 for the general public.  To purchase tickets, please click here. For more information, go to oxy.edu/theater, email theater@oxy.edu or call (323) 259-2922.