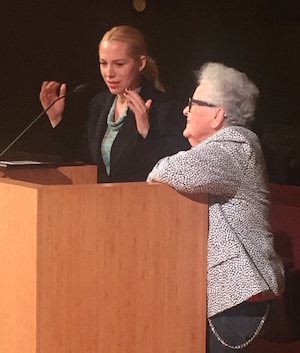 Occidental College Associate Professor of Politics Caroline Heldman has been honored by the city of West Hollywood for her leadership role in successfully advocating for the elimination of California’s statute of limitation on reporting rape.

Governor Jerry Brown signed the Justice for Victims Act on September 28, eliminating the law that previously gave survivors only 10 years to press charges. The signing was the culmination of a successful year-long grassroots campaign headed by Heldman and veteran social activist Ivy Bottini.

Heldman and Bottini were both recognized at the Nov. 15 meeting of the West Hollywood Women’s Advisory Board for "outstanding advocacy and leadership" in the EndRapeSOL campaign – an effort that that began in September 2015 with a meeting in the West Hollywood Public Library.

Previous attempts to eliminate the statute of limitations in California all ended in failure. This time, however, EndRapeSOL was able to build on the work of college activists who have created a new level of awareness about the issue of sexual assault. Their efforts also encouraged scores of survivors to come forward with allegations of sexual assault against famed comedian Bill Cosby that, in some cases, were alleged to have occurred decades ago. (Cosby has denied all wrongdoing.)

Because statutes of limitation apply in a majority of states, prosecutors were unable to consider filing charges in most of the cases involving Cosby. Several Cosby survivors participated in the EndRapeSOL campaign, which included a letter writing and phone call campaign, an online petition that gathered more than 16,000 signatures, multiple trips to Sacramento for committee hearings, and a march to Cosby’s sidewalk star on Hollywood Boulevard.

Key to the campaign’s success was persuading state Sen. Connie Leyva (D-Chino) to introduce SB 813 in November 2015. "Survivors of sexual offenses, including rape, deserve to know that California law stands on their side as they seek justice," Leyva said at the time. "A sexual predator should not be able to evade legal consequences in California for no other reason than that the time limits set in state law have expired."

Despite opposition from the California Public Defenders Association and the California chapter of the American Civil Liberties Union, the bill moved through the state Legislature without a single dissenting vote.

Heldman, who has been a leader in the national movement to fight sexual assault, is now heading an effort to remove the statute of limitations on rape prosecution in each of the 34 states that still have such limits.