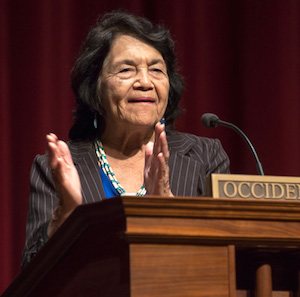 With the vigor and visage of a woman half her age, longtime labor leader Dolores Huerta, 81, exhorted the audience in Occidental College’s Thorne Hall on March 25 to sign up for the Affordable Care Act, see the new film about Cesar Chavez and, most important, organize.

Speaking on issues ranging from immigration to racism, women’s rights, economic disparity and education, Huerta told the audience, "We have to organize. We’re the majority –- women, people of color, white men of conscience. The power is in your person. But we must come together to take direct, nonviolent action to make changes. We have to take that responsibility. We must be responsible citizens."

Along with Cesar Chavez, Huerta cofounded the National Farmworkers Union, later known as the United Farm Workers. A recipient of the Presidential Medal of Freedom, she continues to work tirelessly, developing leaders and advocating for the working poor, women and children. As president of the Dolores Huerta Foundation, she travels across the country speaking to students and organizations about issues of social justice and public policy.  She first spoke at Occidental in May 1970.

"I often thought that by the time my grandchildren were born, there would no longer be any racism in the United States," Huerta, a mother of 11, said on Tuesday night in Thorne. "I have grandchildren, I have great-grandchildren, and there is still racism in the United States, and it’s institutionalized racism. It’s not going to change until we convince people that it was people of color who built this country. This very land you’re sitting on belonged to the Native Americans, then Spain, then Mexico."

Huerta spoke at length on the issue of economic disparity in the United States. "The middle class is shrinking," she said. "This is very dangerous because if we don’t have a middle class, we don’t have a democracy. It’s almost like we’re creating a new kind of feudalism. We are not ‘consumers.’ We are citizens. We’re not born to make other people rich."

Hearkening back to her roots with Chavez, she said, "One way to create a middle class is labor unions."

A central refrain of Huerta’s message was: "None of this is ever going to change unless we are the ones who get involved. We have to be like missionaries of social justice." She urged students to start with outreach to their families, friends and neighbors and "become organizers."