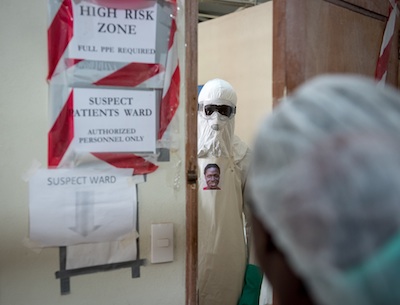 Today, the professor of art history and visual arts is just back from Liberia, where at the invitation of Liberian Ministry of Health she and college photographer Marc Campos rolled out a low-cost program to re-establish a sense of human contact between medical workers and patients.

At 4:30 p.m. on April 15 in Swan Hall’s Dumke Commons, Heffernan and Campos will describe the journey from a simple idea to the stark reality of Ebola treatment units in the Liberian capital of Monrovia in a presentation titled "Ebola Ninjas and Portrait Labels: Can ‘social practice’ art tackle a vexing problem of EVD treatment?"

As an artist whose previous work explores the intersection of photography and the human body, it seemed obvious to Heffernan that attaching a disposable headshot portrait on medical workers’ protective gear could go a long way in mitigating the frightening effects of treating a highly infectious disease.

"The otherworldly appearance and physical barrier of the PPEs – medical workers in Monrovia referred to themselves as ‘scary ninjas’ -- are isolating, dehumanizing and compound patient fear," she says. "Photo portrait labels help engender trust and facilitate the emotional bond between doctors, nurses and their patients."

The practical benefits of her project are intrinsic to its function as "social practice art," in which the portrait label is a catalyst to enhance the relationship between patient and healthcare worker. "Here, the ‘art’ consists of the invisible bond between healthcare worker and patient, a relationship strained by the requisite isolation and frightening appearance of the protective gear," Heffernan explains.

But it was anything but obvious as to how she could turn a good idea into a clinical response to the epidemic.  Months of phone calls, emails and dead ends finally paid off when an introduction to Rick Sacra, the American missionary doctor who contracted Ebola while treating patients in Liberia last summer, led to a formal invitation from Dr. Moses Massaquoi, Liberian chair of Ebola case management.

With a grant from the Arnold P. Gold Foundation and additional support from Occidental President Jonathan Veitch, an Occidental Faculty Enrichment Grant, a MacArthur Travel Grant, and the college’s Office of Communications, Marketing and Strategic Initiatives, Heffernan and Campos were on a Feb. 22 flight to Monrovia equipped with cameras, six printers and boxes of sticky labels and ink cartridges.

Working with scores of medical workers providing 24-hour-a-day care at two treatment centers, plus an ambulance team, Heffernan and Campos – who documented the entire project on in still images and video – field tested her idea for three weeks.

Reactions were positive. One patient gasped when she saw an image of her medical worker’s face for the first time. Medical staff liked the photos, too, noting patients were more responsive to them and that they could now identify each other easily as team members, not "inanimate objects."

The labels were so popular that health care workers wanted to take them home for their own use. "The healthcare workers went through a unspeakably grueling year fighting the Ebola epidemic, and now the treatment units are closing down," Heffernan says. "As they see their employment winding down, many wish for a keepsake to mark this time of national trauma where they stepped up to save their country."

The effective beta-testing of the PPE portraits at the Tubmanburg ETU (Bomi County) demonstrated that the protocol is transferrable and effective. However, Heffernan notes, "Moving forward, I can't approach it site by site. It needs to be scaled up, integrated into the official PPE protocol and funded alongside the other crucial components of the PPE ensemble."

Heffernan recognizes that full-face shield PPE may be on the way in the coming months. However, she emphasizes that there is pressing need right now in Sierra Leone and Guinea, and that portrait labels can be immediately put in place to reduce the suffering caused by isolation and the PPE.  "The harm of not seeing a human face for days on end cannot be underestimated.  At a moment when patients are experiencing abject physical suffering, the isolation, terrifying facelessness, and lack of touch make them feel abandoned by humanity."