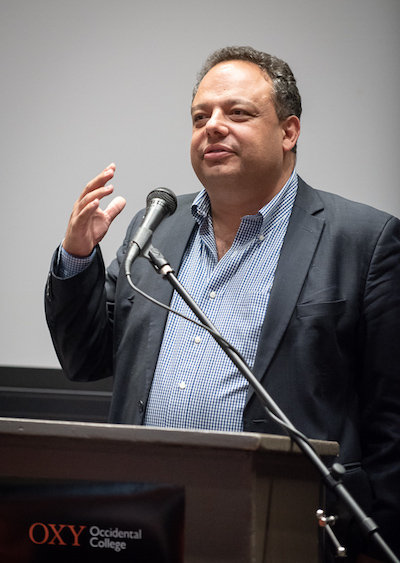 No progress can be made in the ongoing Israeli-Palestinian conflict until both sides can move past a "victim-villain" mindset, according to Tal Becker, one of Israel’s top peace negotiators and senior fellow at the Shalom Hartman Institute in Jerusalem, who spoke on April 24 as Occidental College’s 2018 Jack Kemp ’57 Distinguished Lecturer.

Speaking on "The Israeli-Palestinian Conflict in Jewish Discourse: Identity, Justice and Religion" in Choi Auditorium, Becker admitted that he’s been involved "in every failed round of negotiations with the Palestinians. So much of the way we talk about this conflict is as if we know what the solution is. I’ve been failing at this for a long time, and at the end of the day I have no idea how we get there. There are too many variables that we don’t control. But I do feel that being serious about the stories each people tells themselves about who they are in order to create the space to legitimize dialogue is sort of the forgotten element. There are rights, dignity and needs on both sides."

The reason so many discussions have failed, Becker said, is that they seek pragmatic solutions rather than addressing the cultural identity issues underlying the conflict, with both sides feeling victimized and misunderstood.

"The real challenge is not cerebral—where if we move the pieces around and come up with a creative solution, that will fix things," he said. "This is an identity conflict. The Jewish people and the Palestinian people feel that their identity is at stake, that their basic legitimacy is at stake. Their core identity narrative is at stake. Everything is seen through that prism."

"Unless you have a grasp of the identity narratives of both Jews and Palestinians, you are going to have a very hard time addressing the issues in dispute," he said. The Jewish state, he said, feels that its very legitimacy is constantly in question. Palestinians feel that they have been dispossessed by Israel.

The focus needs to be "building a future founded on fairness, not building a registry of every wrong done on both sides," he said. "Israeli and Palestinian self-determination need to move hand in hand."

About 20 minutes into Becker’s talk, a handful of students stood and briefly held up signs with such slogans as "Oxy Jews Against the Occupation."

Becker heads the Hartman Institute’s educational initiatives on Israel and the Jewish world, including its "Engaging Israel" series— the leading educational program on Israel engagement in North America that seeks to strengthen and re-imagine the relationship between Israel and world Jewry.

Becker also serves as legal adviser to the Israeli Ministry of Foreign Affairs, and has been a senior member of the Israeli peace negotiation team, including the last round of talks mediated by U.S. Secretary of State John Kerry. Called "a diplomat’s diplomat" by Haaretz, he has years of experience on the front lines of many of Israel's diplomatic, legal and policy challenges.

Becker has been a senior fellow at the Washington Institute for Near East Policy, senior policy advisor to Israel's Minister of Foreign Affairs, director of the International Law Department at the Israeli Foreign Ministry, counsel to Israel's U.N. Mission in New York and an international law expert for the Israel Defense Forces.

He earned his doctorate from Columbia University and, among numerous scholarly awards, is the winner of the Rabin Peace Prize and the 2007 Guggenheim Prize for best international law book for Terrorism and the State.

His appearance was made possible by the Jack Kemp ’57 Distinguished Lecture Series, created to engage with Occidental students and faculty in dialogue on important issues of public policy such as the political economy, economic growth in the context of a market system, communitarian values and bipartisan relations.