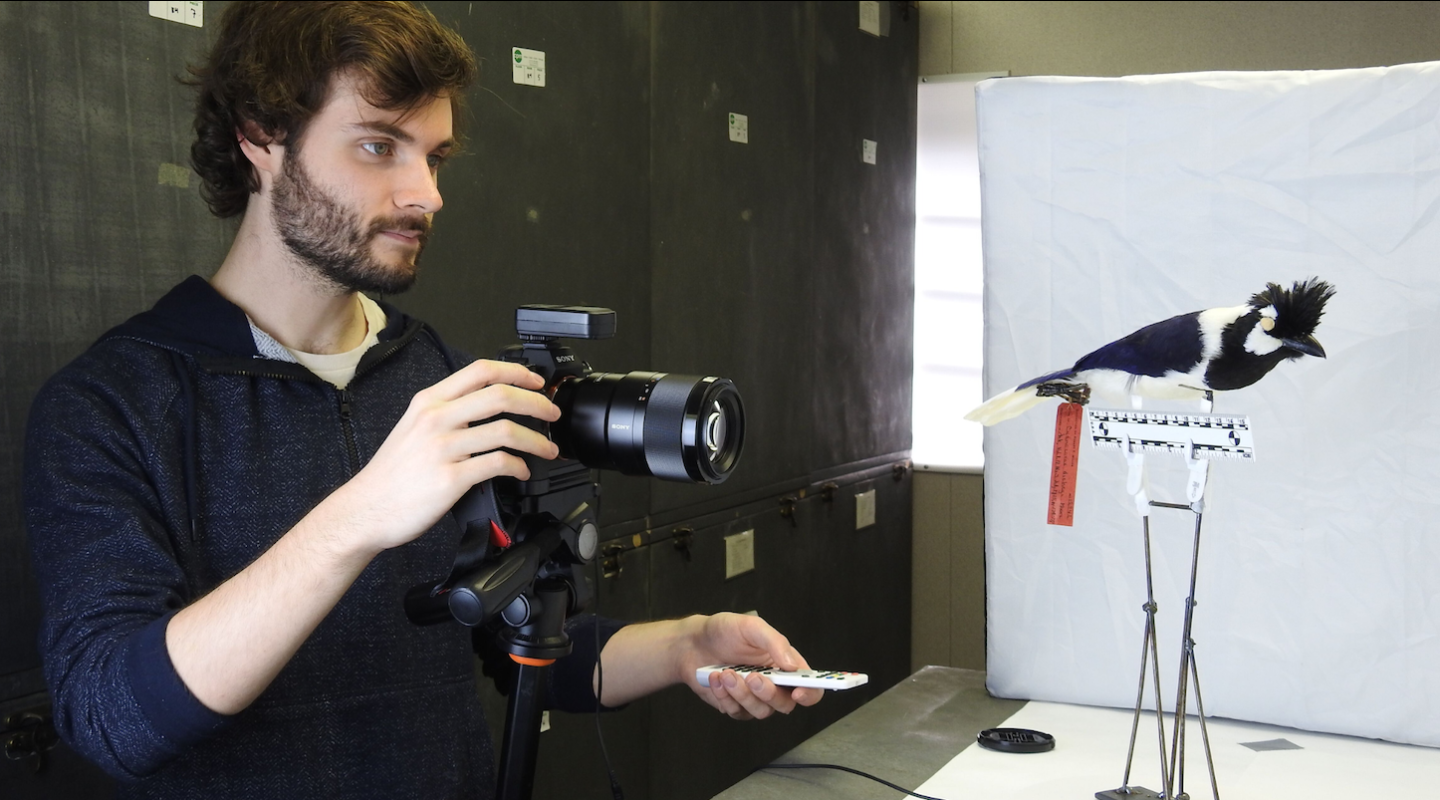 Joshua Medina ’19, whose chance encounters at Occidental with Greek statuary videos and a dog named Fred led to a new 3-D technique for documenting the colors of bird plumage, has been awarded a prestigious National Science Foundation Graduate Research Fellowship.

Awarded annually to candidates in the sciences and social sciences who are pursuing a master’s degree or Ph.D., the fellowship provides three years of support for graduate study leading to research-based advanced degrees and is intended for students in the early stages of their graduate work.

Medina, a comparative studies in literature and culture (CSLC) major, had long had an interest in 3-D modeling before he took a class his sophomore year from CSLC Associate Professor Damian Stocking. Recently returned from Greece with videos of classic Greek sculpture and knowing of Medina’s interest, Stocking asked if he could create a 3-D statue mockup from the videos.

Having read an intriguing paper on photogrammetry—the extraction of three-dimensional measurements from two-dimensional images such as videos or photographs—Medina set to work. Then fate took a hand when he met James Maley, the collections manager of Oxy’s Moore Lab of Zoology, out walking his dog, Fred.

“I had a tour of the lab [home of the world’s largest collection of Mexican birds] and I was absolutely blown away,” Medina remembers. “It felt like a sculpture gallery, with all those colors and textures. On the inside, the collection feels as much like a library as a gallery. You get the sensation of being around a lot of hidden history, and all the DNA data likely could fill shelves. That feeling was just as striking as the beauty for me.” He quickly realized that the 3-D modeling techniques he had used on Greek statuary could also be applied to bird specimens.

“Josh walked into the Lab as a classics major talking about 3-D digital modeling via photogrammetry,” says John McCormack, lab director and associate professor of biology. “From that emerged a multi-year project to 3-D digitize the lab’s specimens that culminated in a submitted journal article, an appearance on NPR’s Science Friday, and an NSF research grant proposal.”

“Josh essentially started and ran his own research operation,” McCormack says. “He invented something that the evolutionary biology and systematics community needed: a way to analyze whole organism, full-spectrum color.”

Everyone at the lab “was such a blessing to work with,” Medina says. “Moore is part of the museum community, it’s part of the taxidermy community, there was a resident artist studying anatomy—there are so many interesting interdisciplinary projects going on there. That approach to interdisciplinary work is what they model. They gave me such an unexpected opportunity to study things in a way never thought I could.”

Although the coronavirus pandemic has complicated the graduate school process, Medina hopes to pursue his Ph.D. at the University of Massachusetts, Amherst, where biologist Duncan Irschick uses 3-D modeling to explore animal functional mechanics. Medina ultimately sees lots of possibilities for his technique for museum collections generally, although he’s not quite done with birds yet. “Using UV light, we’ve been asking questions about the colors we can’t see,” he says.