Kennedy Addresses the "Dilemmas of Memorialization" 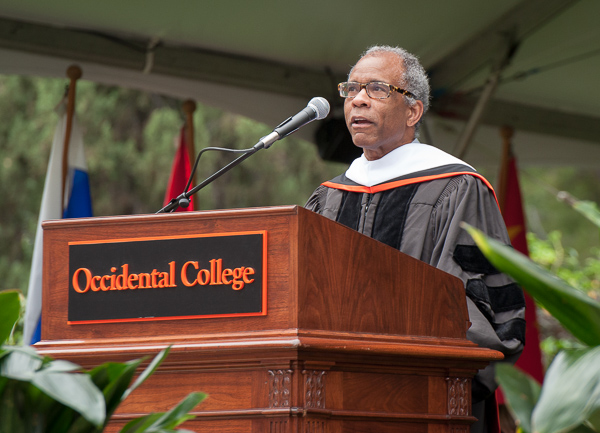 Such disputes "show that major institutions in American life, including our colleges and universities, are paying unprecedented and long-overdue attention to the sensibilities of historically marginalized groups," Kennedy told the Class of 2016, families and friends gathered in the Remsen Bird Hillside Theater. "That is a profoundly good development."

A transcript of Kennedy’s remarks can be found here.

Debates over whether Yale’s Calhoun College -- named after former Sen. John C. Calhoun, a defender of slavery – or Princeton’s Woodrow Wilson School, named after the U.S. president who expanded segregation in the federal civil service, demonstrate the substance and power of symbolism, said Kennedy, a prize-winning author and legal scholar who specializes in race relations.

To defenders of segregation half a century ago, "objecting to being told to sit in the front or the back of the bus on the basis of your race was the privileging of ‘mere’ symbolism – after all, if you got to your destination on time did it really matter substantially where you sat?" he said.

Rosa Parks, Martin Luther King, Jr. and other Civil Rights activists "were heroically willing to risk their all to challenge the racial etiquette of the Jim Crow system because they rightly perceived those norms to be racial insults that constituted an affront to human dignity," Kennedy said. "Mr. Justice Oliver Wendell Holmes was right: ‘We live by symbols.’"

In assessing these debates, it is important to recognize that people will interpret symbols differently and that there are many different interests to balance, he said.  Kennedy also suggested that the ongoing conversation about what he called the  "dilemmas of memorialization" could be usefully expanded beyond historical figures who are white men.

As one example, Kennedy cited the portrait of pioneering legal activist and publisher Myra Bradwell, whose portrait hangs at Harvard Law School. Initially refused admission to the Illinois bar because of her gender by state and federal courts, her activism helped opened the doors to women to practice law.

But "while Bradwell never explicitly stated that Jewish attorneys should be denied admission to the Chicago Bar Association, she made it clear she had little use for Jewish lawyers … should Bradwell be memorialized? Or should she be de-memorialized? Should her portrait be removed?"

For his own part, Kennedy said that he "generally favor[s] addition over subtraction. I typically prefer adding commemoration of those heretofore neglected as opposed to erasing names or removing monuments. … Outstanding people, worthy of emulation, can rightly be seen as heroines and heroes despite saying and doing grievously hurtful things."

Even so, he supports Harvard Law’s recent repudiation of its seal at the urging of student activists who complained of its association with slavery. "I applaud that decision. But it was by no means unanimous and sensible people disagreed."

Occidental presented honorary degrees to Kennedy and to Stephen Hinchliffe ’55, co-founder and CEO of Leisure Group Inc. and one of Occidental’s longest-ever serving trustees. Hinchliffe has served on the Board of Trustees since 1970.