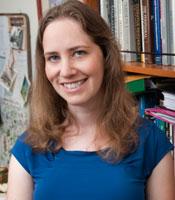 Would a rose smell as sweet if it were blue? Perhaps not, according to a new study by Occidental College’s Carmel A. Levitan, assistant professor of cognitive science.

"Color plays an important role in recognizing odors, and congruent color-odor combinations are rated as more pleasant than incongruent combinations," she writes as lead author in the research, published July 9 in the journal Plos One.

Scientists have long known that people associate certain colors with particular smells. Red, for example, tends to be associated with fruity scents, such as strawberry and cherry.

Levitan recently headed a team of international investigators, including two Oxy students (Michael Dodson ’13 and Jai Levin ’13), who looked at whether these color-scent associations hold true across different cultures. They sought to discover whether these perceptions are hard-wired in our brains or based on cultural factors such as language and culturally based associations between objects and smells. (Dodson used a Richter study abroad scholarship to collect data in Germany; he is presenting the work at the Cognitive Science Society conference in Quebec this week.)

Previous studies have been inconclusive. Researchers have shown that connections between odors, musical notes and geometric shapes appear to be hardwired, but they have had inconsistent results when trying to draw the same conclusion about odors and colors.

"I noticed that when I compared results across studies, they didn't always agree," Levitan said. "For instance, one lab found that the smell of almond went with red, but another one found that it went with blue. But because the studies weren't done in the same way, it was hard to know if that difference was a cultural one or a methodological one."

The researchers used a 36-color palette and 14 "odor pens"—something like felt-tip pens infused with scent (the scents tested were "burnt," "candy," "fish," "flower," "fruity," "hazelnut," "meat," "musty," "plastic," "rice," "soap," "vegetable," "vinegar" and "woody.") They then asked around 20 participants in each cultural group (122 total) to rate which three colors were most and least congruent with each smell. The smells weren’t given names—participants simply sniffed the pens and then selected the colors that they thought went best (and worst) with the odors.

The results confirmed previous studies that found that color-odor connections are fairly stable within a culture. However, Levitan’s study showed quite a difference across cultures.

"I was surprised at how hard it was to come up with a ‘universal’ example of a color-odor association that everyone could agree on," Levitan said. "For instance, here in the U.S., oranges are typically orange in color, but in tropical climates, ripe oranges can actually be green."

Although the scientists had predicted that the color-scent palettes would be similar between cultures that share geography or language, that proved not to be the case. American and German results came pretty close—but so did German and Malaysian. "I was surprised that the Malay and the German data were so similar; we never expected that," Levitan says. "We thought geographical distances would play an important role and were totally wrong."

"These differences could be due to patterns in dietary habits, the role of fragrance in each society, or other social factors," Levitan writes, adding, "We conclude that culture plays a role in color-odor crossmodal associations, which likely arise, at least in part, through experience."

Now scientists get to ferret out which particular factors contribute to these color-odor perception differences across cultures. The affecting factors could be numerous, including language, age, travel experience and frequency of cooking. "Odors can even become associated with emotions, which in turn shape behavior," the researchers write. "Thus it is plausible that color's many effects on odor also arise via associative learning."

Levitan ups the ante in her next study, which adds taste to the mix: She and recent Oxy grad Devin Shermer ’14 examine how people react to red vs. blue salsas. In the research, which has yet to be published, Levitan and Shermer found that "people expect red salsas to taste spicier than blue salsas, and dark red salsas to taste spicier than light ones."