A Model for Both Parties | Occidental College

A Model for Both Parties 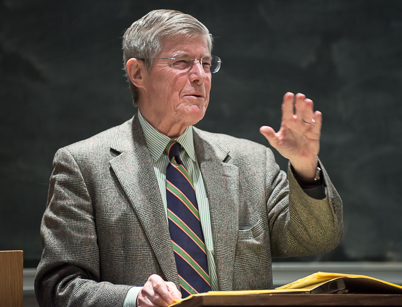 Jack Kemp ’57 is a model not just for Republicans trying to find their way out of the political wilderness, but for politicians on both sides of the aisle, political analyst Morton Kondracke said in Occidental’s inaugural Kemp Scholar lecture Feb. 11.

"Both parties share responsibility for the current polarization in Washington," Kondracke told a packed Mosher Hall. "Both parties spend most of their time trying to thwart the other party. A lot of it is driven by partisan cynicism, and this is the antithesis of what Jack Kemp was all about."

Appointed in 2011 as the first Jack Kemp Chair in Political Economy at the Library of Congress, Kondracke is writing a biography of Kemp, the former AFL quarterback-turned-statesman who became one of the leading architects of the modern Republican party.

"Jack was the first and chief advocate for a new idea called supply-side economics," Kondracke said. "He’s the one who sold Reagan on what became Reaganomics." His new biography will argue that Reagan and Kemp, acting in concert on both domestic and international policy, won the Cold War. The book’s working title, he said, is Jack Kemp: the Quarterback Who Changed the World.

While Kemp was a principled conservative, "he also was an idealist, passionately dedicated to the well-being of all Americans, regardless of race or gender or income," Kondracke said. "He thought that ideas could change the world, and he fought his battles on that level, even though that cost him during his political campaigns."

Were he alive today, Kemp would not write off 47 percent of the electorate, as Mitt Romney did during last year’s presidential election, he said. Kemp opposed Proposition 187, the 1994 California initiative aimed at undocumented workers, and believed supply-side incentives could have a powerful positive effect on communities of color.

"As Newt Gingrich once said, Jack has showered with more African-Americans than most Republicans have ever met," Kondracke said. "Jack honestly believed that the GOP could once again be the party of Lincoln, that if the economy provided jobs that extended into the ghetto, African-Americans would vote Republican."

In the wake of Romney’s defeat, Kondracke added, "We have seen the beginnings of the emergence of ‘Kempism’" from such figures as Rep. Paul Ryan of Wisconsin (who counted Kemp as a mentor), Gov. Bobby Jindal of Louisiana, and Sen. Marco Rubio of Florida. "What the Republican Party needs is what Jack provided—a conservative message that would appeal to average, ordinary citizens."

Occidental is seeking additional funds to complete a $500,000 endowment to permanently sustain the Kemp Scholar program.