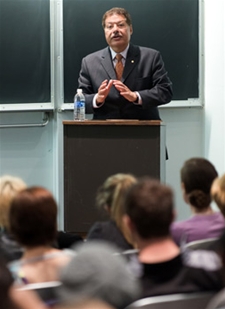 The United States must improve its education system and increase its investment in science and technology innovation to remain a leader on the global stage, said Ahmed Zewail, winner of the Nobel Prize in chemistry, in a talk he gave today as the featured speaker for Occidental College's Phi Beta Kappa Speakers Series.

"If I could use one word that describes the poor state of the world today, I would say ‘education.' The world is lacking in education," said Zewail, the Linus Pauling Chair Professor of Chemistry and a physics professor at Caltech. "I also see a [decline] in work ethics. There is a difference between just graduating from school and really achieving."

His well-attended lecture in the Norris Hall of Chemistry, titled "The World in 50 Years," touched as much on the cultural and political problems the United States and other countries face in today's fast-moving and entertainment-hungry age as on the boundary-pushing frontiers of science research.

He spoke with gusto about the scientific progress on both very small (nanoscience) and very large (astrophysics) scales. For instance, Zewail predicted that in the next 20 years, doctors will use nanotools to slow or stop neurodegenerative disorders such as Alzheimer's disease. Already, scientists are investigating how inorganic nanoparticles can help defend the brain against neurotoxic proteins.

He also spoke of the leaps made in space exploration, such as the ongoing discovery of new planets--more than 1,000 potential planets have been found outside of our solar system by NASA's Kepler space telescope in recent years. Zewail also remembers the amazement he felt sitting in NASA's Jet Propulsion Laboratory's mission control room a few years ago, watching engineers manipulate robots on Mars, about 225 million kilometers from Earth.

Just think of what we can do in the next 10 or 20 years, he said, pointing out that so far, we know only 5 percent of the universe's composition. "So what's the rest? Dark matter and dark energy, and when I ask what that is, nobody knows. There is a huge opportunity there to understand what is going on."

Zewail was the sole recipient of the 1999 Nobel Prize in chemistry for his pioneering developments in femtoscience, making possible observations of atomic motions during molecular transformations in a femtosecond, a millionth of a billionth of a second. More recently, he and his group have developed the field of 4D electron microscopy for the direct visualization of matter's behavior, from atoms to biological cells, in the four dimensions of space and time.

While primarily a scientist, Zewail also plays a diplomatic role. In April 2009, President Barack Obama '83 appointed him to the President's Council of Advisors on Science and Technology, and in November of the same year he was named the first U.S. science envoy to the Middle East. A passionate proponent of democracy, Zewail briefly returned to his native Egypt in 2011. During the "Arab Spring," in which people across the Mideast demanded change in government leadership, Zewail publicly called for the ouster of Egyptian President Hosni Mubarek. He has continued to monitor Egypt's nascent democracy.

"In the Western media, you get the idea that the revolution is not going well, but Egypt has had the first free election since 1952," he said "The revolution is like the stock market. It goes up and down, but you hope you've made a good investment."

Zewail told the audience of another investment: the founding in Egypt of the Zewail City of Science and Technology. Rejected by the country's earlier regime but now going forward, the project aims to educate the country's top high school graduates in science and technology. It is located on 300 acres near the edge of Cairo and aims to graduate its inaugural class in September. The initiative is backed by a powerful board of trustees that includes six Nobel laureates and the former president of MIT.

After his lecture, Zewail signed copies of his recently published memoir, Voyage Through Time: Walks of Life to the Nobel Prize. His presentation was the sixth annual address in Oxy's Phi Beta Kappa Speakers Series, which is underwritten by the Ruenitz Trust Endowment. Past speakers include TV science personality Bill Nye, social critic Jonathan Kozol, and philosopher Judith Butler.