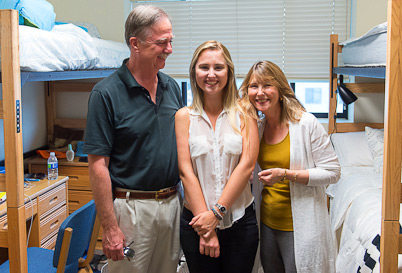 The first-year from Seattle and her parents, Michael and Sheila, were among the earliest arrivals at Newcomb, one of the five campus residence halls that opened to the Class of 2016 under uncharacteristically grey but mercifully cool skies on the first day of Orientation.

Following the advice of the Oxy parents they met at a Seattle reception last month, they immediately began making up Kate’s bed in her ground-floor triple – "It’s a ‘this one’s mine’ sort of thing," said her father.

Opening boxes and figuring out where everything would go was a welcome distraction from the questions lurking in the background: Will I get along with my roommates? Will our daughter make friends, thrive academically, have everything she needs, know how to do her laundry?

"She’s an only child, and she and her mom are very close," her father said. "The anxiety’s there. I remember dropping her off at kindergarten … but she has strengths I don’t have. She has a facility for being independent, for making friends easily."

Kate, who chose Oxy from the 15 schools to which she was accepted, admitted to some initial nerves, "but now I feel a little more excited," said the future biology major. "I’ve always wanted to go to Oxy."

Outside Newcomb, Sonia Marshall ’15 of New York and Taylor Rowland ’13 of San Diego were among the dozens of enthusiastic O Team members in orange t-shirts greeting families, offering directions, answering questions, and helping to carry boxes. "I had a great experience with my O Team leader last year, and I wanted to give it back," said Marshall.

Both students were up at 5 a.m., but there were compensations. "President Veitch is coming back from Café de Leche with some coffee – he just drove by and asked if we wanted anything," Rowland said as the sound of O-Team cheering and coaches’ whistles from football practice drifted across campus. "He’s so cool."

Veitch told the story of his freshman roommate at Stanford, a farm-bred engineer and devotee of country music who was his opposite in almost every way yet became one of his best friends. "The serendipity of what you encounter in college is extraordinary," he said in urging students to be open to new experiences, new people, and new perspectives.  "And when you say goodbye to your parents, give them an extra-special hug. This is a difficult time for them."