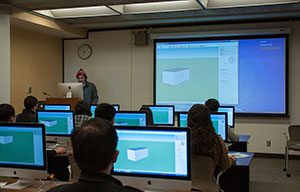 Acknowledging that computers now impact nearly every aspect of our everyday lives, as well as strong student demand, Occidental College will roll out a new computer science major and department in fall 2017.

"With the increasing role of computers, we believe it is essential for students at Occidental to develop skills that will not only allow them to interact with these technologies, but to use computational thinking to address and solve global and local issues," says Occidental’s Computer Science Advisory Committee, made up of faculty from several academic departments.

For example, in the natural, physical and social sciences, computer-based methods have greatly enhanced the ability to generate, collect and interpret large amounts of data, while simultaneously allowing it to be presented in understandable ways. In the arts and humanities, computer science has provided not only a new medium for analysis, but new ways of expression through social media, animation and interactive games.

"I’m thrilled," says associate professor of cognitive science Carmel Levitan, who served as co-chair of the advisory committee. "We've been having discussions about a major for more than five years, and I think we've designed an excellent program that will serve Oxy students well."

"A lot of people across the campus have worked very hard to see this major happen, and we are always looking for additional interdisciplinary collaborations," adds Justin Li, assistant professor of cognitive science, who also served on the committee. "Computer science has become a standard tool in lots of fields. A basic understanding of the power and limitations of computers is critical, even if students do not do work directly with computation."

The major will address not only the technical knowledge, but also the context within which technology is used and what problems it may create. It includes three potential pathways: a computer science curriculum, a mathematics emphasis and a major including an interdisciplinary concentration, which will allow students to explore the intersection of technology with other academic interests.

"The particular program that we've designed encourages students to explore connections between technology and other disciplines, and I'm looking forward to seeing what interesting projects our students develop," Levitan says. "Students with widely varying levels of background in computer science—or no background, but keen interest—can successfully complete this major."

A student majoring in computer science will take a minimum of 12 courses (48 credits) and take or demonstrate proficiency of Calculus 1. The six required classes will include Introduction to Computer Science, Data Structures and Mathematical Foundations of Computer Science. The remaining six classes may be chosen to pursue the different pathways through the major, such as courses offered by the mathematics, physics, cognitive science, biology and geology departments.

The minor consisting of six courses will continue to be offered.

"I am excited to see the College’s computer science program evolve to better support student interest," says Daniel Chamberlain, director of Occidental’s Center for Digital Learning and Research. "I am especially compelled by those aspects of the program that sketch out connections between the many other departments that might consider computational approaches to data, text, media, inference and argument. A liberal arts institution of Occidental's quality and ambition needs a computer science major, and the unique addition of the computer science interdisciplinary pathway will really set Occidental apart."

"In addition to giving our students the opportunity to integrate computational thinking into their scholarly work, I believe that we also need to make sure that we are helping our students learn to train their critical and analytic capabilities on the very tools, structures and systems that make up the digital cultures they inhabit," Chamberlain adds. "As much as we might think about how technology is impacting liberal arts colleges, this kind of program will allow us to turn the tables and prepare our liberal arts graduates to make an impact on the cultures of technology."

"One of the things that I love most about Oxy students is that they are committed to improving the world," Levitan says. Through the computer science major, "Our students will use their liberal arts training to ask insightful questions and to come up with creative solutions to problems."