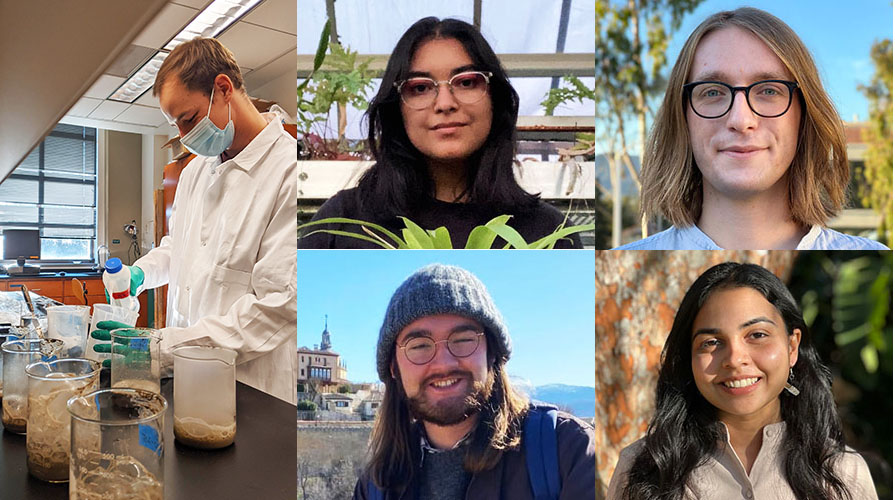 Five Occidental College students collaborating with faculty mentors in the fields of geology, physics, biochemistry, biology and chemistry have been named 2022-23 Science Scholars and presented with research grants funded by the Kenneth T. and Eileen L. Norris and Fletcher Jones foundations.

Each Science Scholar receives $15,000 for research conducted spring term junior year, summer research between junior/senior years, and all of senior year. Each scholar will present their work at a professional conference as well as at Oxy's summer 2022 Undergraduate Research Conference.

Grimmett will analyze sediments drawn from Parker Lake in the Sierra Nevada (east of Yosemite) to create a record of wildfires and the surrounding environmental conditions during the late Holocene epoch—the period covering the last 11,700 years. “Establishing a relationship between climatic changes and past wildfire variability will make it possible to interpret modern variability to see how severe these changes are and what possible future repercussions may be,” says Grimmett.

Hai is working with Assistant Professor of Physics Sabrina Stierwalt on a project entitled “Star Clusters in Interacting Dwarf Galaxies.” Using specially granted high-resolution data of a dwarf galaxy merger from the Hubble Space Telescope, Hai and Stierwalt will test their theory that such interactions between galaxies trigger disproportionately massive star cluster formation.

“The findings and the methodology we are developing and plan to publish will be of broad interest to the astrophysics community, due to the insights they offer in fields such as star formation, dwarf galaxy evolution and the physics of the early universe,” Hai says.

Custo’s research project, on which he is working with Associate Professor of Chemistry Emmanuelle Despagnet-Ayoub, is entitled “Investigating the Potential of Functionalized Carbon Nanotubes to Increase the Energy Density of in a Semi-Solid, Non-Aqueous Redox Flow Battery System Using Two Approaches of Carbon Nanotube Functionalization and Complexation.”

Despite its intimidating title, Custo and Despagnet-Ayoub’s project could have a major impact on our ability to store energy from intermittent sources such as solar and wind power. Redox (reduction-oxidation) flow batteries, or RFBs, have a great potential for storing intermittent source energy because they have decoupled energy and power storage units. “This project aims to assess the potential of carbon nanotube-cyanometallic complexes to increase the amount of energy that can be stored on a RFB while decreasing its size,” Custo says.

Ranganath, together with Gretchen North, the John W. McMenamin Endowed Chair in Biology, is working on a project entitled “Interacting Effects of Heat and Water Stress on Plant Tissue Thermotolerance” that will study the impact of climate change and rising temperatures on different plant species.

“My project aims to uncover how different plant species are affected by heat and water stress and whether these stresses have compounding effects,” Ranganath explains. “It is also aimed at finding whether heat tolerance varies between juveniles and adults of California native or commonly planted city trees. I hope that the results of my research will help us gain insight into how plants cope with heat and water stress and predict how tree species in urban and natural environments will cope with changing conditions.

Thomas-Colwell will be collaborating with Fletcher Jones Foundation Professor of Chemistry Michael Hill on a project titled “Electromechanical Reshaping of Cornea,” a study of a promising alternative method of correcting common eyesight problems arising from the deformation of the cornea.

Existing procedures such as LASIK surgery cause significant damage to the underlying structure of the cornea. Electromechanical reshaping of the cornea provides a non-invasive and low-cost option that manipulates the chemical structure of the cornea for permanent reshaping. “We’re working on a technique for correcting nearsightedness and other problems using custom 3-D printed lenses that provide a highly customizable and relatively inexpensive method for corneal reshaping,” says Thomas-Colwell.