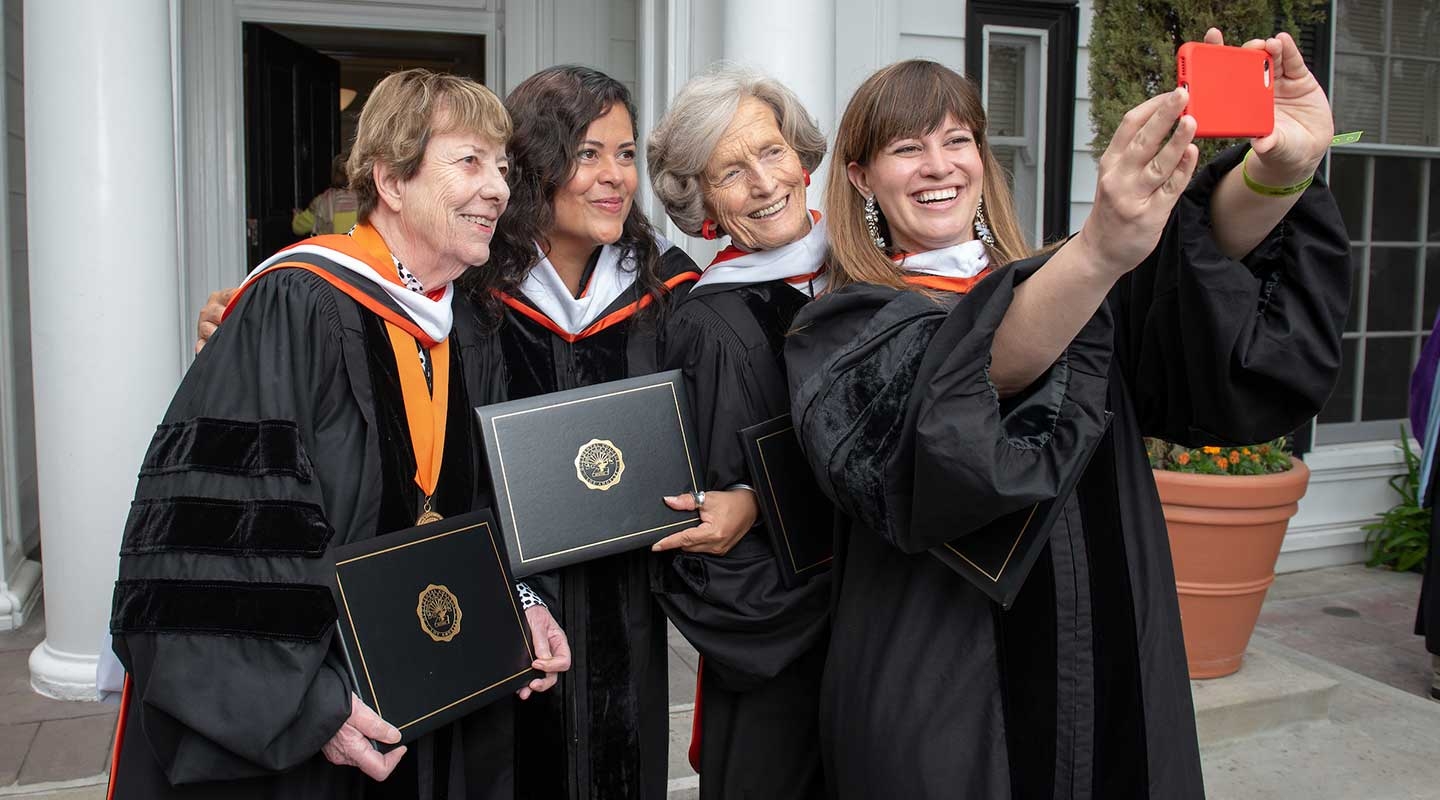 Four women representing more than half a century of leadership in the fields of tech, politics, international education, and conflict resolution addressed the Class of 2018 at Occidental College’s 136th Commencement ceremony May 20.

The four leaders received honorary degrees on the 125th anniversary of the presentation of diplomas to Occidental’s first graduating class in 1893, which was composed of two women: Maud E. Bell and Martha J. Thompson.

In her stirring call to action to the 509 graduates from 37 states and 16 countries, El-Amine passed on some career advice she heard from her old boss, President Barack Obama ’83 -- something that struck her as "a truly Oxy thing to say."

"‘Worry less about what you want to be, and more about what you want to do,’" she quoted the president as saying. "This is to say, the world doesn’t need more people who want to be fancy things, it needs more people who want to do the un-fancy things. Jump in. Iterate. Learn the systems. Pay your dues. Pick your challenge and then pick up a wrench when your hammer doesn’t work. Your resume will write itself."

There are many different definitions of peace, which paradoxically could become a point of conflict, Soetoro-Ng told the graduates and their families.

"If your definition of peace-building is harmony, personal peace, calm, and meditation, while another person’s is activism, being loud, being proud, and fighting for what’s right in a very passionate way, it seems like you don’t have the same sort of stage," she said.

Selleck offered another piece of advice in her remarks: Don’t worry if you don’t have a clue what you want to do with our life.

"I didn’t, but I needed a job," she explained. "Thanks to the Career Center, I had a number of interviews. Most companies could quickly explain what I would be doing for the rest of my life. Because tech was so new at the time, IBM, on the other hand, had great difficulty in explaining exactly what their work was all about. So, determined not to sign up for boring, I took a leap into the unknown and the result was nearly 36 years with IBM, followed by a CEO position in Silicon Valley."

Kerr-Adams paid tribute to Oxy’s role in shaping her career as a teacher and advocate for international education.

"Mid-20th century Occidental had a strong strain of internationalism. … There was a a spirit of openness at Oxy that encouraged us to open our eyes to the world and learn all we could about what was going on around us," said Kerr-Adams, who met her husband, Malcolm Kerr, the future president of American University in Beirut, during her junior year abroad in Lebanon.

"Another very important part of that first year back at Oxy was the realization that among the benefits of my overseas experience was a deeper understanding of my own culture and appreciation of the United States," she added. "It was the kind of reflexive learning that happens when studying a foreign language helps you to better understand your own language."