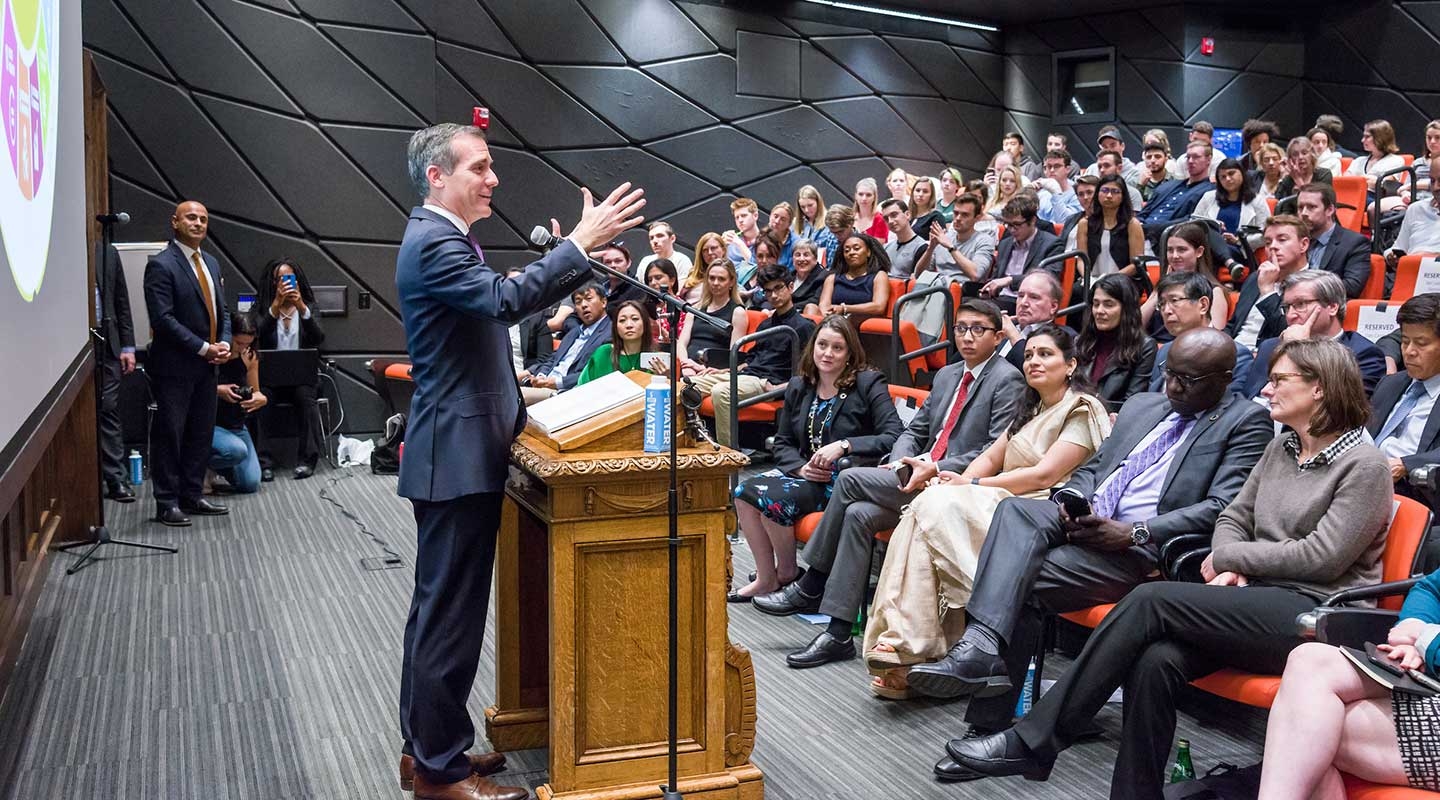 Occidental College will partner with the City of Los Angeles in an ambitious effort to accelerate and measure the city’s pursuit of sustainable, inclusive, and equitable growth as part of a unique global initiative backed by 193 countries.

"Los Angeles can, should, and will lead in building the healthier and more prosperous world that we dream of for our children and grandchildren," Los Angeles Mayor Eric Garcetti said Monday in a campus speech announcing the joint effort. "Our partnership with Occidental College matches that commitment with the brainpower, research, and data collection that will keep us on target to reach for the highest goals."

"I am honored to support Mayor Garcetti and his amazing team in this ambitious effort, known as GA-L.A. – Global Ambition, Local Action," said Khagram, who will serve as senior advisor on the initiative. "Later this spring we will begin convening stakeholders from across the entire community to contribute to making L.A. a leader in achieving the SDGs. Angelenos will and must be the direct beneficiaries of our efforts, but we will also assemble a set of practices with our partner cities that can be adapted by municipalities around the world."

Garcetti has co-signed a memorandum with the World Council on City Data (WCCD), establishing Los Angeles as one of eight local data hubs for sharing information related to the SDG indicators. Occidental students are already at work utilizing WCCD data standards to measure how current city plans and programs align with the SDGs.

Adopted by all of the U.N.’s 193 member nations in 2015, the 17 SDGs call on the public, private, and non-profit sectors to address challenges that range from ending hunger and reducing inequality, to building resilient infrastructure and combating climate change.

"Why are we doing this at Occidental? Oxy has a proud tradition of global engagement," said Garcetti, who once taught at the College and cited its Kahane United Nations internship program and its Diplomacy and World Affairs Department, the only one of its kind in the country.

The mayor’s speech kicked off a series of United Nations Week events at Occidental, including a panel on global cities, SDGs and diplomacy with Nina Hachigian, believed to be the city’s first-ever deputy mayor of international affairs, and a presentation by Saskia Sassen, Robert S. Lynd Professor of Sociology at Columbia University and one of the world’s leading scholars of globalization, immigration and global cities.

The city and Occidental also will jointly convene a GA-L.A. collaboration with like-minded global cities, all committed to advancing the SDGs and sharing lessons learned with one another. The launch workshop will be held on February 5-6 at Occidental with the active participation of leaders from Bogota, Mexico City, Mumbai, Nairobi, New York, and San Jose.

As founder and leader of the Global Partnership for Sustainable Development Data in 2015, Khagram travelled around the world and recruited hundred of partners in the public, private and non-profit sectors to begin to use big data to achieve sustainable development goals.

One of the people Khagram worked with in creating the Global Partnership was Jeanne Holm, formerly of NASA, JPL and the World Bank who in 2016 became Garcetti’s chief technology advisor. Khagram’s expertise and international network fit neatly with the city’s efforts to build on its 2015 SDG-based Sustainable City Plan, which lays out a series of short- and long-term goals for a cleaner environment and a stronger economy. Los Angeles’ successful bid for the 2028 Summer Olympics also requires the city to demonstrate how it is advancing SDGs.

"Cities are on the front line of getting services to ordinary people, and we know that 60 to 70 percent of the world’s population will be living in cities in the coming decades. That’s why this initiative is so critical," Khagram said.

"This is a college-wide effort," Khagram emphasized. "Oxy is committed to being the premier liberal arts college for Sustainable Development Goals."