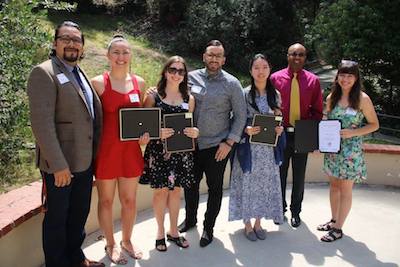 Occidental College students who have demonstrated outstanding leadership as well as academic and interpersonal skills were honored at the 2015-2016 Division of Student Affairs Leadership Awards on Thursday, April 21.

In remarks at a special luncheon, faculty and administrators noted the students’ selflessness, positivity, diligence, drive, kindness and grace. As one remarked of Emerging Leader of the Year Award winner Jarron Williams: "He is humble and practical and encourages others to join him in their endeavors and be their best selves."

The student awardees are:

Unsung Champions of the Year Award
Sabrina Degnan ’19 of Atascadero

For Excellence
Shilpa Bhongir ’16, an economics major from Northridge

For Community
Olivia Smith ’16, a mathematics major from Seattle

For Service
Somer Greene ’16, an independent pattern of study major from Irvine

For Equity
Aaron Hammonds ’16, a sociology major from Pasadena

The List award for first-year students was established by two sisters and a daughter of Charles List 1908. The Cox Award for sophomores was created in 1980 in memory of Cynthia Cox ’72 by her parents and friends. The Hammack award for juniors was established in 1955 by Mrs. Daniel S. Hammack, Dan S. Hammack Jr., and friends as a memorial to Daniel Steward Hammack 1905.