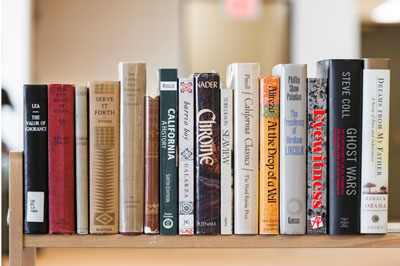 Gift-giving season is nigh, and when it comes to choosing the perfect item, the options are endless. So, we’ve narrowed things down a bit by compiling a list of Oxy literary gift recommendations.

We asked some Oxy faculty and staff if there was a title that inspired them to pursue their field of study, a protagonist with whom they shared an expertise, or a plot that resembles an adventure they experienced. Perhaps they just had a story that grabbed their interest and was worth sharing.

We hope their responses will enliven your search for some great book gifts -- for others, or for yourself -- this holiday season.

Telegraph Avenue by Michael Chabon
I am a fan of Michael Chabon's work, and his latest novel, Telegraph Avenue, is a fine piece of work. He looks to Dickens as a model for writing, which means that Telegraph Avenue has all the makings of great Dickensian fiction except inordinate length: vivid characters and situations, a well-drawn sense of place and of the social or cultural issues that inform individual lives, great dialogue, a finely tuned ear for the sound of language and the pleasure of words, a well-modulated satirical tolerance for the eccentric, and a generosity of spirit with respect to the tensions that inhere in human life.

Jorge Gonzalez, vice president of academic affairs/dean of the College

The Shadow of the Wind by Carlos Ruiz Zafón
My recommendation is The Shadow of the Wind (La Sombra del Viento) by Carlos Ruiz Zafón.  It is a delightful mystery/love story that takes place in Barcelona in the years following the Spanish Civil War.  In addition to [being] a fascinating story, it describes Barcelona in beautiful detail.  Reading the book makes you feel as if you were walking the streets of the city.  While the Spanish version of the book is much better, the English translation is very good as well.

Let Us Now Praise Famous Men by James Agee
One of my favorite books is James Agee's Let Us Now Praise Famous Men. Agee was writing an article on sharecropping in the South during the Great Depression. Instead of a 30-page article (due in three weeks), he came back nine months later with a 400-page hymn to a vanishing way of life in the rural South. It is one of the most beautiful books I have ever encountered.

Amy Lyford, professor of art history and the visual arts

A thoughtful, cynical, yet incisive and funny look at the cruise industry; a text whose author both engages with and also pokes fun at the project of academic writing. When's the last time you read an essay about cruise-ship vacations that has footnotes?

Warmth of Other Suns by Isabel Wilkerson
I have recently been recommending Warmth of Other Suns by Isabel Wilkerson. It documents the history of African-American migration out of the South using narratives of several individuals whose rich and compelling stories really grabbed me. Because my mother migrated from Mississippi to Los Angeles, this book helped me to place her experiences within a larger context, and it also helped me to better understand the history of Los Angeles' African-American community, a focal point of my own research.

A Feeling for the Organism: The Life and Work of Barbara McClintock by Evelyn Fox Keller
Written in 1984 by a woman who is herself heralded in science -- more as author than scientist -- this biography of a Nobel Prize-winning geneticist helped redress the relative scientific neglect of McClintock in her early life due in part to her gender, in part to her frumpy pants, in part to her general "otherness." McClintock may not have cared that much about neglect; she had her work to sustain her. What I most admire about Keller’s book is that it shows McClintock arriving at her breakthrough discovery of movable genetic elements in a deeply simple way: by letting her organism, corn, reveal its secrets to her. Not that McClintock "heard" things; rather, she trained herself to truly see.

The Two-Income Trap by Elizabeth Warren
I just had my mind blown by Harvard law professor and now Sen. Elizabeth Warren's book, The Two-Income Trap. If you want a counter-intuitive, creative, well-written, data-driven explanation for why the middle class is struggling in today's economy, this is it! Hint: two of the main reasons middle-class families are economically vulnerable are 1. women entering the workforce (you'd think that would help families; Warren shows otherwise) and 2. our unfair public school funding (school quality is the No. 1 determinant of housing prices). Enjoy!

Building Stories by Chris Ware
I would share Chris Ware's Building Stories, which is a boxed set of 14 comic strips in various permutations marketed under the guise of a graphic novel. I've been a fan of Ware for the better part of 20 years now, and he is at the top of his game, breaking new ground here. Building Stories is deservedly making most 10 Best fiction lists for 2012.

A Heartbreaking Work of Staggering Genius by Dave Eggers
Like so many types of relationships, my love for Dave Eggers’ A Heartbreaking Work of Staggering Genius came down to timing. I read it a few years after losing my mother to cancer when I was 22, finding myself redefining "family" for my brothers and father. As generational contemporaries, I identified with Eggers' untidy, ironic style and so appreciated his raw and honest approach. He shared a truth that I so needed at the time -- and one those young adults who lose their footing will always appreciate.