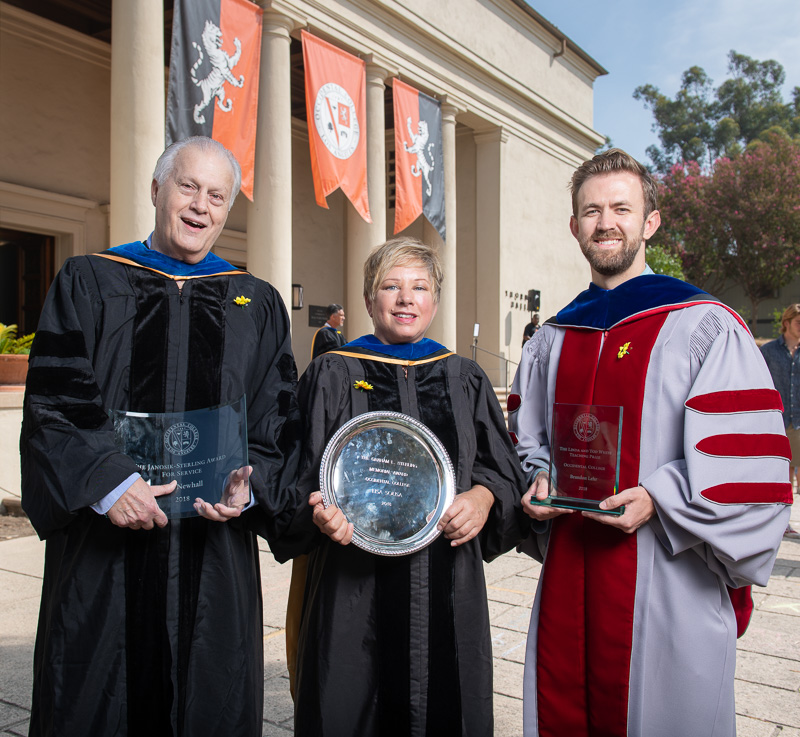 Four Occidental College professors were honored for exceptional teaching, scholarship and service August 28 as the Class of 2022 was formally welcomed to the Oxy community at the College’s 124th annual Convocation ceremony.

History professor Lisa Sousa was awarded the prestigious Graham L. Sterling Memorial Award, established in 1972 to recognize a faculty member with a distinguished record of teaching, service and professional achievement.

Associate professor of economics Brandon Lehr and biology professor Beth Braker both received the Linda and Tod White Teaching Prize, which is based on student nominations. It has been presented since 2008 thanks to the generosity of Linda and Tod White ’59, both of whom were present at the ceremony.

English professor Eric Newhall ’67 was presented with the Janosik-Sterling Award for Service to the College, created in 1993 to honor the memory of politics professor Robert Janosik.

In nominating her for the Sterling award, Sousa’s colleagues cited not only her ground-breaking scholarship and outstanding performance in the classroom, but also pointed to her extensive service on behalf of her colleagues and her students. Her latest book, The Woman Who Turned Into a Jaguar, required the ability to read multiple indigenous languages as well as Spanish to describe gender relations and power dynamics in colonial Mexico. As a result of her impressive scholarship, she was named a Scholar-in Residence at the Getty Center last year. "I am humbled and inspired by the combination of linguistic and historical training" that her work requires, one colleague wrote.

Sousa’s colleagues also praised her as "an exceptional teacher: supremely organized, meticulous, deeply knowledgeable, and creative in her approach." She has been instrumental in creating collaborations with regional institutions such as the Autry Museum and the Keck Foundation that have produced multiple paid internships and research opportunities for Oxy students. Sousa’s colleagues said they also are grateful to her for her tireless and effective advocacy on behalf of a more equitable community. As one said, "Lisa has made Occidental a better place in so many ways, often not highly visible but powerfully present."

Lehr, one of the winners of the White Teaching Prize, was praised as a teacher who takes seriously Oxy’s mission to provide students with the skills and confidence to understand and critically evaluate our increasingly complex, interdependent and pluralistic world. His teaching reflects a deep appreciation "for the transformative power of a liberal arts education in which students are active participants in their education," one colleague wrote. Combined with "challenging material, substantial workload, and high expectations," Lehr impresses upon students "that intelligence is not a fixed characteristic, but a skill itself, that is developed with engagement, persistent effort, and learning from mistakes."

As one of Lehr’s students wrote, "I will admit that this was the most challenging course that I ever took at Oxy, but simultaneously was also the most rewarding course from which I certainly learned the most." Another student testified that Lehr "undoubtedly stands out in my mind as one of the greatest professors and mentors that I have ever had (and this is a powerful statement because, as you know, all Oxy professors are incredible)."

Braker, the second White Teaching Prize recipient, was praised for creating a "highly experiential, active, participatory environment, and to develop student connection to the natural world." While doing this, a colleague wrote, she helps students "make discoveries for themselves, and acquire the skills and conviction to continue to engage with science and the natural world, whatever post-Oxy directions they may take."

Students also praised Braker. "Dr. Braker was an invaluable mentor ... She was consistently there to meet with me in person to guide me through designing, implementing, and writing ... I felt valued as a student because she believed and supported me for the duration of the process," one wrote. Braker’s mentorship continues outside of the classroom. As another student wrote, "She took the time to ensure that I knew I was supported and cared for, and continues to help me … prepare for post graduate life, despite the fact that our class has technically ended."

In Eric Newhall’s 44 years at Occidental, "It is staggering to consider the multitude of roles that he has filled: Faculty Council president, director of academic advising, Core director, associate dean, and dean of students," said Wendy Sternberg, dean of the College, in presenting the Janosik-Sterling award. As one of the founders and long-time director of Oxy’s Multicultural Summer Institute, "Eric’s vision of MSI as a model of diversity in higher education was ahead of its time," one colleague wrote.

Newhall demonstrated the same commitment as Core director, when he pushed to elaborate the CSP program into living and learning communities that integrate the curriculum with students’ lives beyond the classroom. For this initiative, he won the 2004 National Student Advocate Award.

Newhall is no stranger to awards, as a three-time winner of the College’s Loftsgordon Award and one of the first recipients of the White Teaching Prize. By nominating him for the Janosik-Sterling Award, his colleagues sought to recognize him for "how directly, profoundly, and persistently he has served the students and faculty of Occidental." One of his colleagues summed it up this way: "We simply would not be the College we are today without Eric Newhall."