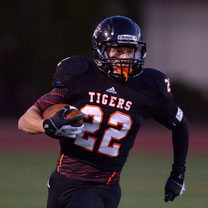 Occidental College football will play its 2018 season, thanks to a remarkable recruiting effort led by first-year Head Coach Rob Cushman and a fundraising drive that raised more than $970,000 in gifts and pledges from football alumni in three months.

President Jonathan Veitch announced his decision at today’s regularly scheduled meeting of the Occidental Board of Trustees, marking a hard-won comeback after the cancellation of the last four games of the 2017 schedule over safety concerns raised by an injury-diminished roster.

"This is a true team achievement that deserves to be celebrated, as well as a potential inflection point for football and Oxy athletics more broadly," Veitch said in a campus announcement following the board meeting. "It’s my hope that we can take this model of alumni support and apply it to other Oxy sports. We need the help of all alumni to sustain the proud tradition of Oxy athletics."

Between returning players and first-year recruits, Cushman expects to have a roster of somewhere between 55 and 58 players. "Working under the most daunting of circumstances, Rob practiced what he preached — he never gave up," Veitch said. "Leadership is a key to success in any sport, and Rob has put on an impressive display of leadership this spring."

A volunteer team of football alumni led by Vance Mueller ’86, who played five years of pro ball with the Los Angeles Raiders, worked closely with College fundraisers toward a four-year goal of $1.14 million to help support the program. As of Sunday, they had exceeded their first-year goal and raised 85 percent of the total. "Vance had great confidence that alumni would respond," Veitch said. "His faith and hard work have paid off."

The funds raised by football alumni include an additional 25 percent for the greatest needs of Oxy athletics, which will be devoted to women’s athletics as part of a broader fundraising effort that will begin next fall.

While recruitment and fundraising results are justifiably cause for celebration, "At the same time, we can’t lose sight of the significant challenges that still exist," Veitch cautioned. "The national conversation about the future of football shows no sign of abating."

The number of scholar-athletes who can meet Oxy’s rigorous academic standards has always been limited, and the indications of decline in participation in youth programs suggest that pool could become even more limited over time, Veitch said. "I’ve made it clear that the College has not and will not sacrifice safety or academic or student conduct standards to field a sufficient roster size. For all of these reasons, we will continue to monitor and revisit the viability of the football program as circumstances require."

In January, an Athletics Task Force composed of faculty, students, alumni, staff, coaches and trustees recommended that Occidental redouble its efforts to field a safe and competitive football team. That recommendation was contingent on a recruiting effort that yielded a viable roster and a substantial increase in financial support for the program from alumni.

It was agreed that a progress report on recruiting and fundraising would be delivered by the president at the April 22 Board meeting.

The Occidental College Board of Trustees Friday unanimously supported the recommendations of President Jonathan Veitch and a 16-member task force to field a football team this fall, contingent on current recruiting efforts yielding a viable roster and a substantial increase in alumni financial support for the 124-year-old program.

President Veitch and College fundraisers will partner with football alumni to mobilize new financial support for the sport, similar to the way that the College has worked with track and field, tennis, and swimming and water polo alumni to meet program needs. The board will receive a progress report at its April 23 meeting to evaluate progress on fundraising, recruiting and safety efforts.

"We recognize the importance of football in the lives of many of our students and alumni, and want to do what we can to ensure those opportunities are available for future generations of students," Veitch said. "While initial recruiting efforts have been encouraging, and Athletics and the administration have made a major commitment to addressing safety concerns, we will need to forge a strong partnership with our alumni athletes to provide financial support for the program as we’ve done in other sports."

The football task force – made up of trustees, faculty, students, football alumni, athletic staff and senior administrators – was appointed by Veitch in the wake of a 2017 season that ended with the cancellation of the last four games over safety concerns raised by an already small roster diminished by injuries.

After two full days of presentations by experts, wide-ranging discussion and in-depth data analysis on January 19-20, the task force recommended that the College continue to support a safe and competitive football program. Central to that recommendation were its conclusions regarding recruiting, fundraising and safety.

Preliminary projections of the number of returning players combined with an unprecedented number of early decision commits and the anticipated size of the regular decision football applicant pool suggest that a roster of 55 players is within reach for 2018, the task force concluded.

"The recruiting results Head Coach Rob Cushman has produced under the most difficult circumstances and his presentation of his holistic coaching values and philosophy, including the need to uphold academic standards, convinced the task force that Oxy has the right person to lead this program," the task force recommendation said.

While the College has already made new investments in equipment and coaching staff, a significant increase in alumni financial support will be required to raise the program to a more competitive level, the task force found. Football alumni on the task force expressed confidence that additional alumni support will follow a decision to continue with football.

Task force concerns about player safety were allayed by a presentation by Steve Briglio, associate professor of kinesiology at the University of Michigan’s Institute for Healthcare Policy & Innovation, on the latest concussion studies. The task force also heard information on the best practices that Oxy has implemented in the training room and on the field over the last four years.

The Athletics Department long has prioritized the safety of its student-athletes. Playing techniques and practice policies in football have already been changed, a state-of-the-art concussion protocol has been in place since 2013, and this year the College invested in new helmets and other equipment, the task force learned. The College is committed to providing a safe and equitable environment for all of its student-athletes. As part of that commitment, Occidental will pursue additional safety issues with the other members of the Southern California Intercollegiate Athletic Conference (SCIAC).

"I want to thank President Veitch for assembling this task force and putting his trust in us," said co-chair Sue Bethanis ’82. "The task force came to a well-thought-out recommendation to sustain Oxy football. Now I am excited for us to get behind Vance Mueller ’86 in his fundraising efforts and to support Coach Rob Cushman and the football team!"

"Every member of the task force made significant contributions, but two members stood out," said co-chair Bill Davis ’80. "Sue Bethanis put a collegial and transparent process in place that enabled a disparate group to come together to make a compelling recommendation. Vance showed tremendous leadership and passion in his advocacy for the football program. He will play a pivotal role in our efforts to engage with alumni to increase their support for the football team, for Occidental Athletics and for the College as a whole."

Presented to the Board of Trustees on January 26, 2018

After two full days of thoughtful deliberation, expert presentations, passionate discussion and in-depth data analysis, the Football Task Force recommends that Occidental College continue to support a safe and competitive football program, resuming play with the upcoming fall 2018 season. Central to the Task Force recommendation were its conclusions regarding recruiting and fundraising, two key areas that will impact the short- and long-term success of the program. This recommendation summarizes these issues, reasons cited for keeping football as well as other concerns expressed.

The topic of recruiting was covered extensively. The Task Force came away with a strong consensus that Head Coach Rob Cushman and his staff have significantly elevated Oxy’s football recruiting, as evidenced by an unprecedented number of early decision football commits. Preliminary projections of the number of returning players (20-25) combined with early decision commits (14) and the size of the current regular decision football applicant pool led the Task Force to conclude that a roster of 55 is within reach for 2018. Any announcement about participating in fall 2018 should be accompanied by some type of contingency statement, based on assessments of returning players in February and regular decision acceptances in May.

With regard to fundraising, it was agreed that a significant increase in alumni financial support will be required to raise the program to a more competitive level, especially given the recent program investments made by our SCIAC competitors. Task Force member Vance Mueller ’86, representing football alumni, expressed confidence that additional alumni support will follow a decision to continue with football, and he committed to working with the president and Institutional Advancement in the very near-term to firm up giving projections. The Task Force recognizes that if this support does not materialize, the football team’s ability to be competitive long-term will be limited, if not jeopardized. While these fundraising efforts are one key to football’s success, it is noted that the College’s contributions are also important. The College in late 2017 committed incremental operating funds for an additional assistant football coach and a full-time recruiter for Athletics as well as one-time funds for a much-needed upgrade on football equipment, including safer helmets.

Many reasons were cited for maintaining the football program, in addition to the recruiting success and fundraising prospects already cited. Continuing a 124-year tradition at Occidental was the foremost rationale; also, it was recognized that football, like other sports and extracurricular activities, is an integral part of a student’s liberal arts experience at Oxy. A presentation by Prof. Steve Broglio on the latest concussion studies, as well as best practices that Oxy has implemented in the training room and on the field, allayed the task force’s significant concerns about player safety. Finally, the recruiting results Coach Cushman has produced under the most difficult circumstances and his presentation of his holistic coaching values and philosophy, including the need to uphold academic standards, convinced the Task Force that Oxy has the right person to lead this program.

Looking to the future, we hope that the Task Force – made up of faculty, students, administrators, athletics staff, alumni and trustees – can serve as a model for future deliberations on other important issues.

Presented to the Board of Trustees on January 26, 2018

I ask that the Board accept the recommendation of the task force that the College continue to field a safe and competitive football team in fall 2018. In its recommendation, the task force recognized the importance of three key issues: safety, recruiting, and fundraising. Since these are crucial to our success, I would ask that the Board review the status of these three issues at its April meeting to ensure satisfactory progress is being made.