Oxy Immigration Symposium: "The Beginning of a Conversation" | Occidental College

Oxy Immigration Symposium: "The Beginning of a Conversation" 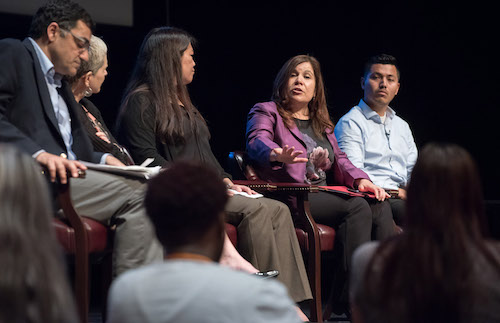 More than 250 administrators, faculty and students from dozens of Southern California colleges and universities gathered at Occidental College March 10 to consider how best to respond to sweeping changes in federal immigration policy.

"This is the beginning of a conversation," Occidental President Jonathan Veitch said at the opening of the daylong symposium, "Moving Forward," co-hosted by the Association of Independent California Colleges and Universities. (A second symposium for schools in Northern California will be held at Mills College in Oakland on March 24.)

"In the end, our goal is to be more effective in providing support for the most vulnerable members of our community … [and] learn how we might build a coalition that can speak with one voice in challenging the ugly climate and related policies that are being propagated in our country," Veitch said.

Joining administrators from USC, UCLA, the Cal State system and a wide range of private colleges and universities were representatives from non-profit groups such as the Coalition for Humane Immigrant Rights of Los Angeles (CHIRLA) and the Mexican American Legal Defense Fund (MALDEF). Also in attendance were legal experts including Lucas Guttentag, a law professor at Stanford and Yale and former long-time director of the ACLU Immigrant Rights Project, who delivered the keynote address.

Many colleges and universities are still debating the merits of declaring themselves to be a "sanctuary campus" -- a term that is widely used, loosely defined and means different things to different people, Guttentag said. "Whatever form sanctuary takes, it conveys an essential message: we are doing all we can to provide a measure of support and safety to students who are the mission of our institutions, as well as for workers and families who are a part of extended college family. That message of support has never been more important than today."

Immigrant advocates reported a huge increase in the number of inquiries seeking legal advice. "We are being asked questions that break your heart," said Maria Blanco, executive director of the UC Davis Law School Undocumented Legal Services Center. "Questions like, ‘My brother is disabled. If my parents are deported, how can I get a guardianship so he can continue to get medical care he needs?’ Our work has tripled."

Support for undocumented students is essential, agreed Angelica Salas, CHIRLA’s executive director. "I want to say thank you to Occidental College, my alma mater [that] invested in people who were undocumented, that got full scholarships," said Salas, a 1993 graduate.  "You don’t know how many people I know who are doing this work because this college invested in us. It’s about supporting those students who are facing his difficult moment and making sure they succeed."

Although much of the debate has focused on immigrants from Mexico and Central America, Betty Hung reminded the audience that the affected population is far more diverse. There are estimated 400,000 undocumented Asian-Pacific Islanders in California alone, Hung said, and almost half of undocumented students at UCLA are Asian Pacific Islanders.

Even as campuses rally in support of their students, it’s vital that they promote dialogue, said Salam Al-Marayati, president of the Muslim Public Affairs Council. "As much as we are very passionate about the issues here, the reality is that a majority of people who watch cable TV are watching Fox News," Al-Marayati said. "If we can engage with people who have opposite points of view in civil dialogue, to understand where people are coming from and to offer alternatives to some of their presumptions, I think that would go a long way. We can’t afford to be even more widely divided than we are now."

After the panel discussions, participants went to breakout sessions that focused on specific issues such as legal assistance, admission and financial aid issues, student activism, and what being a "sanctuary" campus could mean.