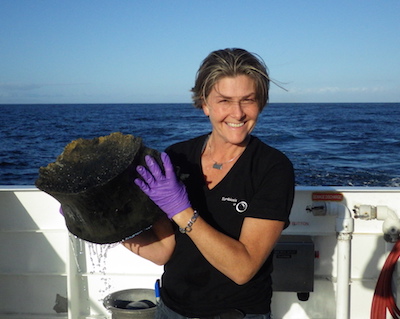 New research by Shana Goffredi, associate professor of biology at Occidental, may place proposed precious metal mining in the Gulf of California in hot water.

Two years ago, using an SUV-sized robotic drone from onboard a Monterey Bay Aquarium Research Institute vessel, Goffredi discovered tiny orange tube worms and dozens of other animals, some never before seen, living near super-heated (up to 680 degrees Fahrenheit) hydrothermal vents near the ocean floor in areas completely devoid of light.

Just 75 kilometers away in the same gulf, Goffredi and 10 other scientists onboard the vessel found an entirely different set of life forms near another hydrothermal vent. Here, the tube worms were blood-red. In all, the two sites shared only seven out of 61 animal species identified. The finding contradicted a common scientific assumption that neighboring habitats will share similar animal communities.

"It was a totally amazing discovery," Goffredi says. "I’ve been looking at the deep sea for 25 years, and many of the biologists I was with have been looking at it for much longer, and we were all mesmerized by this sight. It was really a surprise. If we could be so awestruck in that moment, imagine how much more is out there to discover."

Goffredi and her colleagues published their findings in the July 26 Proceedings of the Royal Society. They believe that the different geologic and chemical environment of each vent creates a rare and specialized animal community unique to that site. The study shows that larvae from one vent may not successfully colonize a neighboring vent.

These superheated vents that are richly attractive to sea life also spew forth gold, copper and other precious metals from deep inside the earth. Mining companies are in the process of applying for permits worldwide to mine the seafloor for these minerals. Mining machinery could destroy some of these newly discovered vent colonies, which would also affect the formation of new colonies. Destroying just one vent could eliminate critical habitat for many species.

Why should we care about tube worms when there is gold to be mined—potentially a lot of it? Goffredi points out that just 40 years ago, we didn’t even know that these communities existed in the deep sea, and now we realize that "they are as rich with life as rain forests."

The life forms here function and evolve in unique ways, using internal microbes to create energy and drive their metabolism. Rather than using light, "They use chemical energy from the center of the earth," and instead of competing with other creatures, they use bacteria "in a cooperative form of survival," she says.

Such creatures deserve further study, she says. "It’s about exploration. We spend billions of dollars to study outer space and we know so little about life on our own planet. Every time we go into the deep sea we discover new species."

If deep-sea vents are mined for their precious metals, entire species could be wiped out before biologists even get "a sense of these deep-sea habitats," Goffredi says. "Say you level this habitat and you’re assuming that animals will move into other vents nearby. That’s a false assumption because these two sites we discovered in the Gulf of California were close in proximity but were really, really different in community structure. So if they destroy a site thinking that the animals will repopulate the other, that will not happen. And you may never get that biodiversity back."

Many drugs and other biopharmaceutical compounds have been derived from oceanic creatures, Goffredi points out, including a promising breast cancer drug that was isolated from a deep-sea sponge. "There are some estimates of millions of species in the ocean that we haven’t discovered, and we don’t know what their role is." In addition, "Many of the microbes in these habitats influence the Earth’s atmosphere, making it livable for the rest of us," she says.

Goffredi doesn’t think her findings will stop deep-sea mining, and she says she is not advocating for a ban. "We’re advocating caution. And it begs for more exploration. Maybe don’t conduct mining operations in areas where there is a lot of biological diversity. Make the companies explore and map the seafloor so that they, in consultation with scientists, can pick the areas where they will do the least amount of damage. I think deep-sea mining will happen, but you can’t just go into it carelessly. It requires some thought."

Because Goffredi’s research suggests that water depth, geology of the seafloor, temperature and chemistry of the vent fluids all influence which species can survive near any given vent, conservationists and management agencies need to consider a broader range of factors in their efforts to predict the environmental impacts of proposed mining as well as the resiliency of affected sea-life communities. "If you wipe out certain communities," Goffredi says, "it could have unforeseen consequences."